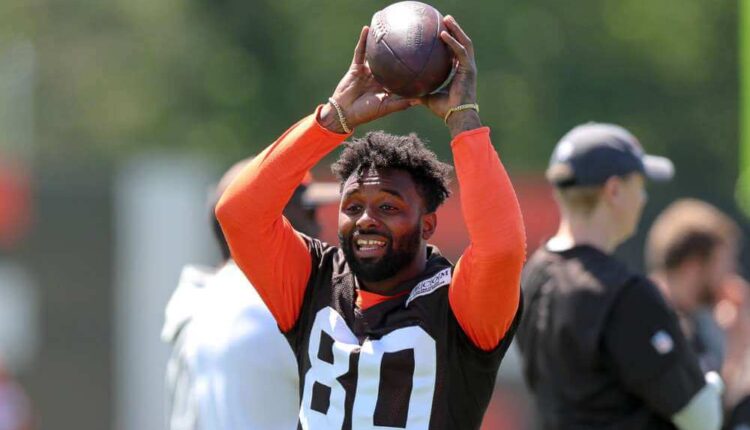 The wide receiver pool is extremely deep as there are plenty of late round targets to consider. The wide receiver rankings are filled with sleeper candidates and potential breakouts. So many that there will be a few who go undrafted only to pop up on the waiver wire at some point in the season.

That said, I want my hands on a top-10 wide receiver and if I can get two I’ll make it work. I’m not one to punt the running back position, but if I can get my hands on a DeAndre Hopkins and Michael Thomas start, I’ll do it. Wideouts are less likely to get hurt and there’s a bit of safety there when projecting targets. Plus, we are witnessing the beginning of what is increasingly becoming an extreme passing league.

Before we get to the full wide receiver rankings, let’s take a look at a few wide receivers that I value significantly higher or lower than current ADP. Don’t draft on ADP, but know where guys are going.

Jarvis Landry finished as WR19 in PPR formats last season but his 81 catches were the fewest he’s had in his career. Landry finished with the same amount of yards per game (61) in Cleveland as he did in his final year with Miami, but he had fewer targets and 31 fewer catches. His volume is about to go down a bit in year two with the Browns as they brought in Odell Beckham Jr.

My ranking of Tyreek Hill is pretty much right on par with Fantrax’s ADP. At least for now it is. I don’t really know what to think about the possible suspension. In fact, I try not to think about the situation at all, but I know people are wondering. The suspension could be four, six or eight games. We really don’t know. I’ve ranked him as if he’s suspended six games as it’s right in the middle of the two reports. Hill finished as wide receiver one last season, and if it’s only four games he’s worth the gamble in the fourth or fifth round. If it’s eight games, I’ll likely pass. It all depends on the start of your draft and your ability to stash players.

This is a prime example of over drafting a player to a point where there is no value in taking him. I get the appeal and I understand Mecole Hardman could be the number two option in the Chiefs passing game, should Hill get suspended and Sammy Watkins fails to stay healthy. There are for sure two’s going much later than him, with a better track record than Hardman. I wouldn’t advise reaching for Hardman.

Maybe the selection of A.J. Brown will help Corey Davis in the year-end wide receiver rankings. It certainly can’t hurt as Davis only caught 65 of the 112 balls thrown his way last season. I’ve never questioned the skillset, but I have questioned Marcus Mariota and the offense. Yet, another offensive coordinator for Mariota and Davis to deal with in 2019 Plus, more weapons to cut into Davis’ usage rate as Tennessee signed Adam Humphries and they’ll welcome Delanie Walker back. Not to mention this is a team that wants to run the football with Derrick Henry. Davis is a great best ball target or standard play for those who are dinosaurs.

You don’t have to draft MVS as the 40th wideout off the board as it seems like you can wait until the last couple rounds to pull the trigger. Valdes-Scantling showed us at times he could be a fantasy starter in 12-team leagues, and I expect some more consistency in year two. Aaron Rodgers enters the season fully healthy and you should take advantage of cheap weapons linked to him. MVS disappeared in games last season, but he had three games of at least 75 yards and two 100 yard contests.

Are you onboard with Chris’ Wide Receiver Rankings for PPR? For more great rankings, sleepers, and analysis check out the 2019 Fantrax Fantasy Football Draft Kit.