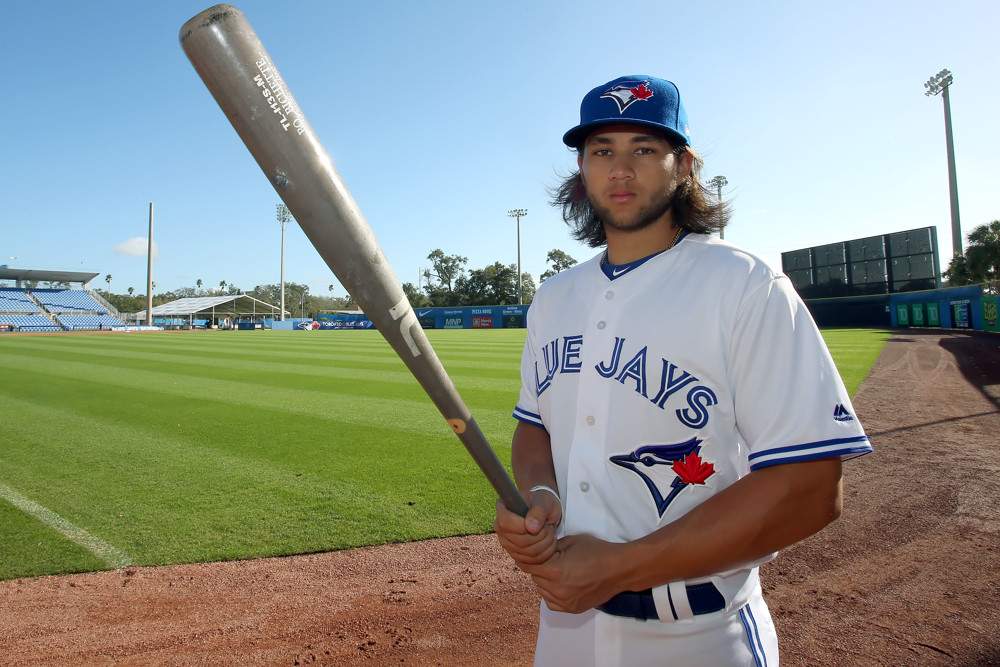 Is there a position more desirable than shortstop when it comes to fantasy baseball? No, the answer is no. A position once known for its defensive prowess changed forever with the shortstop revolution of the 1990’s, led by Nomar Garciaparra, Alex Rodriguez, Derek Jeter, and others. Now the position is annually filled with offensive juggernauts like Francisco Lindor, Trea Turner, and Trevor Story. The defense is still there, but we care very little about that in fantasy. We like home runs, stolen bases, runs scored, and this position now gives us almost more than we can handle. Almost. And with the murderer’s row of top prospects currently calling shortstop home, that offensive prowess is not just going to continue, but likely get better.

A whopping 38 shortstop prospects made my top-250, dwarfing all other infield positions. Even the hot corner only had 22 in the top-250. So if the hot corner had 16 less, what does that make shortstop? Scalding? Like the kind of hot you experience when you bite into a hot pocket you microwaved for too long. How’s the roof of your mouth feel with all that scalding hot shortstop prospect goodness in it? Okay, that just got a little creepy. Enough of that, let’s get into the list.

If you thought the first tier of third base prospects was impressive, they can’t even touch this dynamic tier of prospect goodness. Not one, not two, not three, but seven shortstop prospects made my top-25 overall. Outside of Vladimir Guerrero Jr, you could make the case that Fernando Tatis Jr is the best prospect in baseball.  After a 22-homer, 32-steal season in 2017, Tatis was on a near 30/30 last season before fracturing his thumb sliding into second base, thus ending his season in late-July. The newest $300 million dollar man, Manny Machado, will move from shortstop back to third to accommodate the superstar prospect who should be up with San Diego at some point this season.

Out of the seven shortstops in this tier, Bo Bichette was the one I got the most live looks at in 2018 with Double-A New Hampshire. All Bichette does is generate hard contact to all fields. Even his outs were usually loud ones. Same can be said for Brendan Rodgers. While I’ve been a little lower on the Rockies top prospect than others, the upside and floor are both quite high. It will be interesting to see how the Rockies fit him into the picture with Trevor Story, Garrett Hampson, and Ryan McMahon also in the middle infield picture. With Bichette, I’d say the upside is a .280-.300 hitter with 15-20 homers and 25-plus SB. For Rodgers, more along the lines of .280 with 25 homers and 10-15 steals.

When it comes to elite top-10 overall type prospects, Royce Lewis doesn’t get brought up as much as guys like Vlad, Adell, Franco, Tatis, etc. Yes, everyone knows how great his upside is, but due to him not having a flashy skill set, he tends to fly a little under the radar, at least, as much under the radar as a top-10 overall prospect can. Lewis’ combination of a plus hit tool, plus speed, and 15-20 homer pop are going to make him an all-star caliber shortstop and a fantasy dynamo within the next couple of seasons. And remember, I took him 8th overall in the Prospect Mock 480 we did back in November, ahead of guys like Jo Adell and Alex Kirilloff, both of whom I’m insanely high on.

Both Andres Gimenez and Carter Kieboom might not be universally recognized as top-20 dynasty prospects quite yet, but they’re damn sure knocking on the door as my rankings indicate. And while they’re quite different in terms of their offensive capabilities, both have the upside to become early-round fantasy talents in the next few seasons.

Last but certainly not least, we have 18-year-old phenom, Wander Franco. Ranking a player this young with this little professional experience as the #5 overall prospect in baseball is ballsy and a little crazy, but damn, the skills are out of this world. He’s one of the few prospects in the minors with a 70-grade hit tool and 70-grade raw power. If any shortstop prospect from this list has a chance at becoming the top fantasy player in the game down the road, it’s Franco.

This tier has upside up the ying yang. On top of that, only one player, Gavin Lux, has made it to the Double-A level. But while most are young and inexperienced, the upside is so damn intriguing. The least experienced of the bunch, and potentially the one with the highest upside, is recent J2 signing, Marco Luciano. Some consider Luciano to have the highest upside out of the entire 2018 J2 crop and I tend to agree. The ability to hit for both average and power while chipping in double-digit steals should have dynasty owners fighting each other for his dynasty services.

Bookending this tier are a couple of chaps named Luis Garcia. One will call our Nation’s capital home one day, the other, the city of brotherly love. I’d love to have both in dynasty, but the Nats Garcia is the one I’m particularly excited about. Both possess above-average to plus speed, but Washington Luis projects to hit for more average and power.

Just one spot behind Washington Luis is a vastly underrated prospect that has been in Vladimir Guerrero Jr and Bo Bichette’s shadow even after a .302/25/29 season in the Midwest League and Florida State League last season. That man is Kevin Smith and he deserves your undivided attention. No matter how long Toronto tries to delay Vlad’s arrival, he’s not going to remain in the minors forever. Same goes for Bo. Maybe once they’re north of the border in Toronto, Smith will finally get his due recognition as an elite offensive prospect with immense upside in dynasty leagues. This is the last call to get on the Smith hype train that I’m about to drive off the rails.

Sing it Ozzie! “I’m going off the rails on a crazy Kevin Smith hype train!”

Right behind that hype train for Smith are two more chugging along down the tracks by the names of Nico Hoerner and Xavier Edwards.Hoerner might have the highest floor of anyone in this tier and that’s saying something with the names around him. The Stanford product is a polished and advanced bat with plus contact skills and speed. He’s on the fast track to Chicago with a 2020 debut likely. With Edwards, the contact skills and speed are prominent and give him a very high upside as a guy that could hit .300 with 30-plus steals and double-digit homers.

Tier three is similar to tier two with plenty of upside and moderate risk due to injuries or proximity to the Majors. Without question, the biggest risk/reward prospect in this tier is Wander Javier of the Minnesota Twins. Javier missed the entire 2018 season due to a shoulder injury, which has made him a very interesting prospect to rank. On upside alone, he’s a top-100 guy, but I want to see him get back on the field and produce before putting him there.

A bigger riser up the ranks this season was Isaac Paredes. After displaying above-average contact skills, a solid plate approach, and flashing plus raw power, Paredes is on the doorstep to top-100 prospect status. Another step forward in the high minors this season and he’ll knock that damn door down. There’s .280/25 upside here. But if speed is more your style, Lucius Fox, Luis Rengifo, or Jeter Downs are your guys. All three have run wild on minor league batteries and posses 25-plus stolen base upside in the Majors.

Rounding out this star-studded tier are a pair of Mets, a pair of 2018 J2 signings, and Brayan “Don’t call me Bryan” Rocchio. I’ve already talked up Noelvi Marte and Orelvis Martinez with my 2018 FYPD/J2 coverage, so let’s chat about the Mets duo for a second here. Although their 2018 numbers don’t smack you in the forehead, both Ronny Mauricio and Shervyen Newton’s upside could land them well within the top-100 next year, especially Mauricio. Both have above-average to plus raw power, but Mauricio has the hit tool to hit for a strong batting average as well. While I like both in dynasty leagues, if you want to latch onto one, I’d go with Mauricio.

From top-100 overall prospect to barely a top-40 shortstop prospect, the fall has been quick for Kevin Maitan. Contact woes, plate approach, and endurance have all played a part in the drop, and while the upside is still intriguing, he’s not a great guy to own in dynasty right now. Two more that have slid from lofty perches are Nick Gordon and Jorge Mateo. With Gordon, the issue is lack of power/speed upside. He’ll probably become a starting Major League shortstop, but likely doesn’t give you more than .270/10/15. With Mateo, the speed is there, but the contact skills and approach have regressed, putting a damper on his stolen base totals as well due to the lower OBP.

On the other end of the spectrum, we have some exciting new additions to the shortstop ranks with recent FYPD and J2 players like Alexander Vargas, Blaze Alexander, and Jeremiah Jackson. While Vargas and Jackson were highly rated prospects, Alexander was an 11th round pick out of IMG Academy in Florida and raked his way onto this list. In 55 games between the Pioneer and Arizona Leagues, Alexander hit .329 with 29 extra-base hits and 10 stolen bases. Jackson didn’t find as much success during his first taste of pro ball but flashed his intriguing power/speed profile with seven homers and 10 steals in 43 games.

My pick from this tier to make a big jump over the next calendar year is Wenceel Perez of the Detroit Tigers. The 19-year-old Dominican hit .312 across three levels with 13 steals to go along with it in 57 games. This after hitting .314 with 16 steals in 61 DSL games in 2017. There’s not a ton of power here, but the hit tool and speed are both above-average to plus.

Spring Training games are in full force! It’s time you got your fantasy baseball season started as well. Leagues are already forming at Fantrax.com, so head on over and get your league started today.