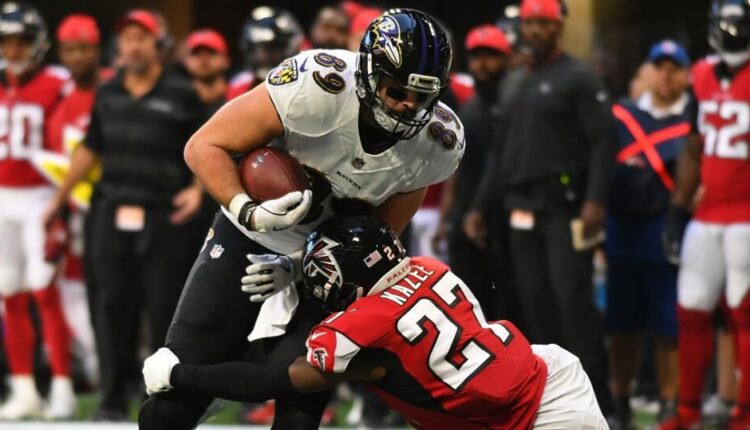 The tight end landscape has been somewhat barren over the last several years. You may have picked up on this, given the lack of options if you didn’t manage to snag Travis Kelce or Zach Ertz in the early rounds of your fantasy football drafts. It seems that we may have finally reached an impasse, however, with the tight end class produced in the 2018 and 2019. Here are my early Tight End Rankings for Half-PPR formats. Below the rankings I break down some of the tight ends I feel will be the biggest surprises, both good and bad, in the coming NFL season.

My biggest surprise this off-season is just how far Mark Andrews has climbed up my tight end rankings. When he was taken alongside Hayden Hurst in the 2018 NFL draft, I have to admit that I was pretty skeptical as to whether or not we’d see production from both. Unfortunately for Hurst, a broken foot prior to the season kept him out the first four games his rookie year and perhaps put him behind the eight-ball when it comes to learning his new offensive system.

Regardless, Mark Andrews absolutely flourished in virtually all receiving metrics during his rookie season. Per Pro Football Focus, among TEs, Andrews ranks 8th in receiving grade (78.0), 5th in yards per route run, 2nd in yards per reception (16.2), and first in passer rating when targeted (129.9). Whew, I need to take a breath after that one.

He does have room to grow in run and pass blocking, which, as long as the Ravens keep him on the field, is a plus for fantasy football owners. If he shows himself to be the better pass catching tight end than blocking, the coaching staff may be inclined to have him running more routes while on the field.

If you follow me on Twitter, this probably isn’t the first time that you’ve heard me harping about the Ian Thomas breakout. In his first moments in the spotlight his rookie year, he didn’t exactly shine. Averaging 20 yards per game and a quarterback rating of 77.1 when targeted?

Fast forward to week 13. Greg Olsen ruptures his plantar fascia, and Ian Thomas once more gets a chance to show the world what he’s made of. Boom – his passer rating when targeted from that point on is 108.96, and he suddenly ranks as the TE6 in half-PPR formats through the rest of the season. Of rookie tight ends, Thomas also ranks second in pass blocking efficiency for 2018. Pass blocking skills are just the ticket to keeping yourself on the field, particularly for a young guy like Thomas.

Now, now, I know what you’re thinking. What about Greg Olsen? My “bold” prediction is that Olsen will not be healthy for all of 2019. Shocking, I know. Olsen has now missed 16 games over the last two seasons due to recurring foot injuries and is at the ripe age of 34. Olsen has publicly stated that he hopes to be healthy and ready for training camp. However, he’s also stated that he has still been working to find the appropriate training to minimize the chance of future breaks. Not exactly something someone who is the picture of health would be chirping, right?

Should Olsen go down, Ian Thomas is primed, ready to produce, and is a buy-now tight end in dynasty leagues everywhere.

Jared Cook is coming off a career year and has officially landed with one of the most prolific offenses in the NFL. Should be a recipe for success, right? I’m calling his bluff for 2019. He’s currently the eighth tight end off the board in half-PPR mock drafts – a price too high for a skeptic like me.

Although I respect the year he had in Oakland, I can’t help but wonder just how much he was simply the beneficiary of being one of the only receiving options in town. Notable wide receivers with the Oakland Raiders in 2018: 33-year-old Jordy Nelson, barely there Amari Cooper, Seth Roberts, Marcel Ateman, and Martavis Bryant. Yeah… I would have thrown the ball to Jared Cook a lot, too.

Cook finished as the tight end 5 in half-PPR formats, and by all measures, this was a statistical outlier in his career. He saw a career high in targets, touchdowns, reception% and his fantasy football finish in half-PPR formats.

They key to Cook’s continued success will be continued volume and strategic efforts on the part of Saints offensive coordinator to involve the tight end in the game plan. Jimmy Graham saw tremendous production in New Orleans under Pete Carmichael prior to being traded to the Seahawks. He saw an average of 119 targets per season and saw a career high of 16 touchdowns with the Saints.

The difference between Jimmy Graham and Jared Cook? Jimmy Graham was essentially the Saints WR1 on a pass heavy offense. Jared Cook will be exactly what he has been for most of his career – a tight end. Michael Thomas is guaranteed the WR1 role now, not to mention the presence of Alvin Kamara, the team’s RB1 and WR2. Cook should see his fair share of targets, but I’m staying away at his current ADP.

What other surprises did you find in Kate’s tight end rankings? Give her a follow and let her know on Twitter @FFBallBlast, and be sure to check out BallBlast: A Fantasy Footabll Podcast wherever you listen.