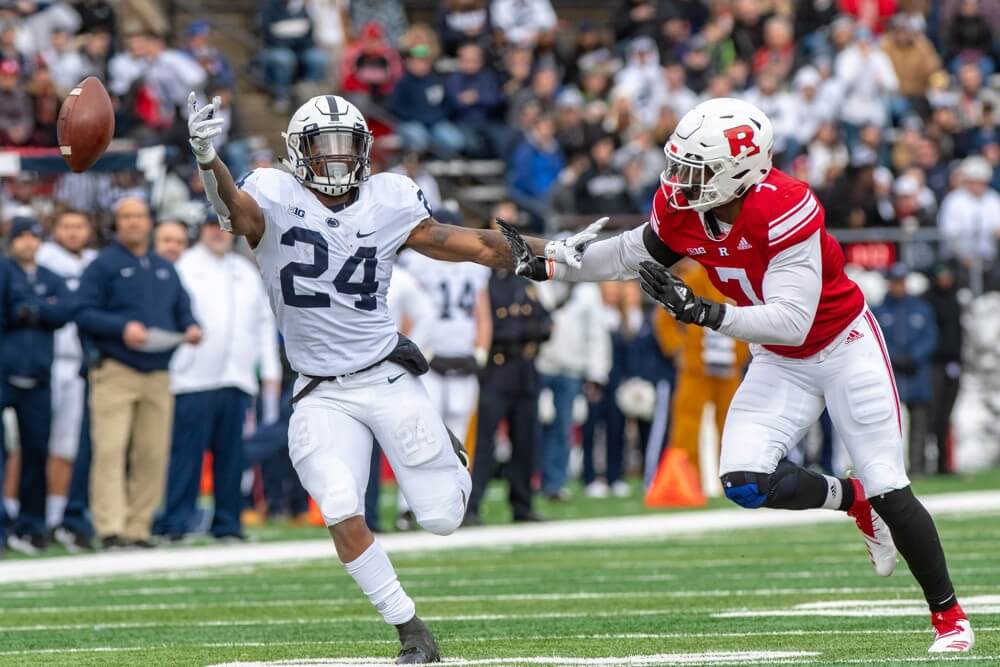 After watching Saquon Barkley shred NFL defenses last year en route to winning Offensive Rookie of the Year honors and finishing as the highest scoring fantasy tailback in many scoring systems, fantasy football owners can hardly be blamed for developing something of an affinity for tailbacks from Penn State. Well, there’s another back entering the NFL this year from PSU, and while Miles Sanders isn’t generating nearly the buzz Barkley did, the 5’11”, 211-pounder has the potential to become a quality NFL back in his own right.

In fact, Thor Nystrom of Rotoworld wrote that, “if Sanders hits his ceiling, he’s going to become one of the best backs in this class — perhaps even the very best.”

“Good Miles Sanders has the hips of a hula girl, the flair for combos of a boxer, and the go-with-the-flow-and-ride-the-wave instincts of a surfer,” Nystrom waxed poetically. “Good Miles Sanders is a surefire starting NFL running back. Good Miles Sanders was made to feast in a zone-blocking scheme. I love that Sanders also brings a ton of value in the passing game. And since he’s had very limited reps, I think it’s fair to project continued growth as a receiver and as a pass blocker, two areas he’s already above-average in. Sanders is skilled enough to line up in the slot. If he continues to develop in this area, he’s going to become a real weapon to a creative offensive staff.”

However, with just about every Day 2 tailback prospect in the 2019 draft there’s a “however.” Here comes the “but.”

“But Sanders’ inexperience showed on the field at times last season,” he continued. “He’s smooth and sleek in action, a natural, but Sanders does not yet see the entire field and anticipate several moves ahead. Vision and feel are two things he possesses, (he’s not Justice Hill), but Sanders hasn’t yet reached that intuitive zone where everything around him slows down and he sees every possibility like Dr. Strange.”

Sure enough, Sanders doesn’t have a ton of game experience after spending so much of his collegiate career behind Barkley—the majority of his 276 career carries came last year for one-dimensional Nittany Lions team that struggled mightily throwing the ball.

Miles Sanders is a Talented Yet Inexperienced Tailback

Sanders piled up 1,274 yards on 220 carries last year for Penn State, adding 139 yards on 24 catches and scoring nine touchdowns. And while those numbers are solid in their own right, Benjamin Solak of the Draft Network thinks Sanders could have benefitted from another season of college ball.

Miles Sanders is a player who likely would have benefitted from returning to school, to develop as a player,” Solak said, “but you can understand why he decided to declare and get his. In his first year of starting, Sanders illustrated the body control, effortless explosive cuts, and penchant for stringing moves together that reminded Penn State fans of Saquon Barkley, who they lost last season. However, even where Barkley was lacking in terms of vision and decision-making, Sanders has more significant issues. He struggles to interpret zone flow, manipulate second level defenders, and make split-second decisions when faced with backside pursuit. His eyes and his mind are not yet in perfect tune with his body, which is why his tape is peppered with one electric long run for every two plays that could have been so.”

However, Solak’s colleague Joe Marino is higher on Sanders, labeling him a Round 2 prospect capable of making an early impact if he can improve his ball security.

“Sanders is one of the few true multifaceted running backs in this year’s class, which drives up his value,” Marino said. “His blend of size, power, elusiveness and receiving ability give him the upside to have a lead role at the next level. While I have minor gripes about his tendency to string out runs too far on wide zone runs, the primary issue with Sanders is being too loose with the football and fumbling. If that can go away, Sanders should find an early role and command touches.”

Lance Zierlein of NFL.com comes in somewhere in the middle, although he agrees that Sanders will likely be selected during the first half of the draft’s second day.

“Well-built glider with the instincts, footwork and agility to shake tacklers but the frame and pad level to finish with some authority,” Zierlein said. “He can clearly create yardage for himself, but he has average acceleration and might need to expedite his downhill process as a pro. Sanders is more skilled than explosive, but he has the size and talent to develop into a future starter with every-down potential.”

“Sanders has the most potential of any of the second-day backs,” ESPN draft analyst Todd McShay said. “He’s got some explosiveness. He’s got size. He can catch the ball well. “I wouldn’t say he’s a finished product. He can still improve in pass protection and some little things. But I think he’s got the most potential after Josh Jacobs.”

McShay’s assessment that Sanders has the second-most upside of any back in this class should be music to the ears of fantasy owners. But the idea of him landing in a crowded backfield like Philly strikes a sourer note than say places like Kansas City or Oakland.

That’s the thing with the pack of Day 2 running backs in this year’s draft—even if you think that he’s the second-best talent, Sanders could fall out of the top five dynasty rookies at the position if he lands in an especially unfavorable situation. The reality is that even when you’re planning for the future, the present rather matters.

On the flip side, unless Sanders hits the landing spot jackpot, he’s not going to be a good enough bet to make a short-term impact to rate more than a late-round flier in fantasy redrafts. Where he’ll slot in dynasty startups and rookie drafts will depend somewhat on where his NFL career begins, although it’s not difficult to imagine a scenario where he could become an intriguing option for dyno owners who made the playoffs in 2018 toward the back of Round 1 in rookie drafts.