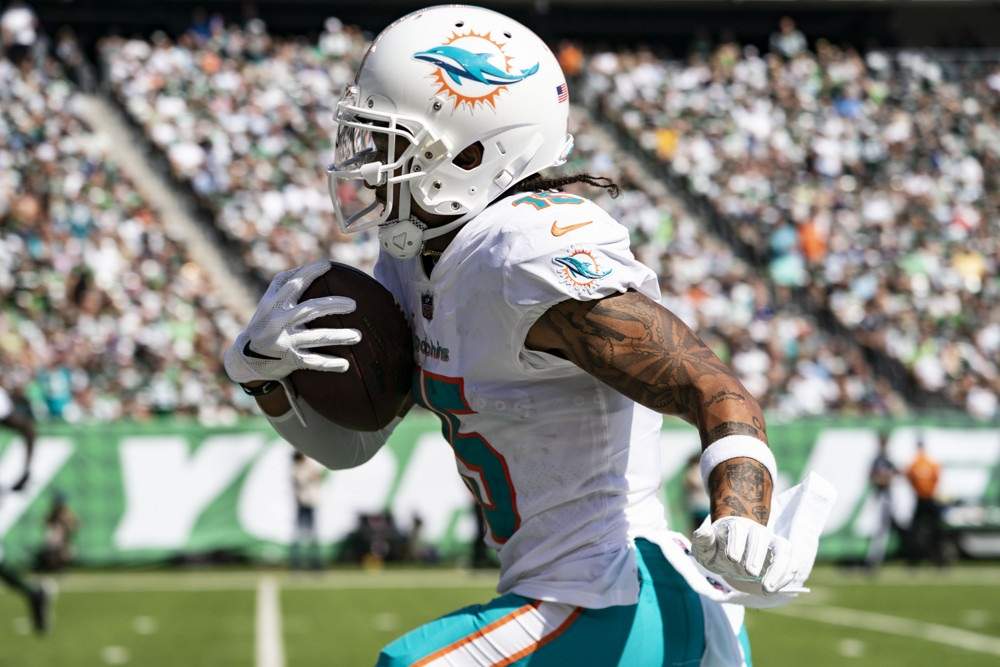 It is May. While your fantasy football league mates are likely still fully in Fantasy Baseball mode or worrying about Memorial Day BBQs, here you are reading about Fantasy Football sleepers. This is why you win chips in December!

These sleepers are guys you can target in early fantasy drafts (best balls are now open!) like I have and are names to remember come August.

Looking to change things up in 2019? Check out the recent Fantrax SuperFlex Mock Draft.

Parris Campbell gives the Colts the slot receiver that they were searching for all of 2018. Andrew Luck averaged 15.9 pass attempts per game to slot receivers in 2018, the most in the NFL. Yet, his top two options in the slot were Eric Ebron, who ran 258 yards and had 70 targets from the slot, and Chester Rogers who ran 355 routes from the slot and had 67 targets. The Colts used a second-round pick on Campbell, largely because he has a natural fit in this offense. Campbell has blazing speed (4.31 40) and can move outside, but his best work comes in the slot. Campbell should slot in as the Colts top slot option, and unless Luck or the Colts offense changes dramatically in 2019, there should be room for Campbell to grow on the 4.5 targets per game that Rogers saw last season. He is much more dangerous with the ball in his hands and should be able to create better after the catch. The one caveat – Campbell should not be much of a factor in the red/end zone, making him a better sleeper in PPR formats. You barely got to take him as a Top 50 WR – he is currently WR 49 according to early season Fantrax ADP.

Latavius Murray will replace Mark Ingram in the Saints offense. I do not believe Murray is as talented as Ingram, but given the role and the talent around him, I am not sure that matters much. Ingram averaged between 11.5 and 14.4 carries per game in each of the last four seasons with the Saints. While Alvin Kamara led them with 50 carries inside the red zone last year, Ingram was a staple in the offense in the red zone, seeing 28 in 12 games last year. That was also the lowest he has seen in any of the last four years. Ingram has also seen at least 14 carries inside the five-yard line in each of the past two seasons. That is where I expect Murray to be utilized, in short yard situations. Not only does this prevent Kamara from having to take those big hits, but Murray has thrived in that role his entire career. He has rushed for at least six touchdowns in each of the past four seasons. Additionally, the Saints ran the ball 46.6 percent of the time in 2018, the fourth highest mark in the NFL. Murray is not Ingram, but he will be a factor in this offense. Yet, he is going off the board as the RB53 at pick 155.62, according to Fantrax ADP.

Demarcus Robinson is a player I expect to write a lot about this season. Tyreek Hill is completely up in the air at this point for the Chiefs. Mecole Hardman is drawing a lot of hype and rightfully so, as he profiles as the best bet to replace Hill – running a 4.33 40 at the combine. He certainly can stretch the field and get behind the defense like Hill. However, scouting reports on him indicated that he is explosive but raw. Many viewed him as a developmental pick. He will be more than that this year, but expecting him to pick up the Hill workload is just silly. Sammy Watkins will be the WR1 for the Chiefs, but he has not played 16 games since his rookie season. He has played fewer than 10 games in two of the last three seasons. He is almost a lock to miss time. Robinson will be a factor in this offense and has a very realistic shot to be the top WR if Watkins misses time. Right now you can get him off the board as the 90th WR and 209 overall, according to early Fantrax ADP. Do yourself a favor and take a late round flier here.

Trey Quinn is one of my favorite sleepers so far. Washington’s receiving room is not littered with proven NFL talent. In fact, Josh Doctson and Paul Richardson are the most accomplished of the group. They also have rookies Terry McLauren and Kelvin Harmon competing for snaps. However, Quinn should win the slot receiver job for them. There are already reports from OTA’s that Quinn consistently is finding short and intermediate holes for both Dwayne Haskins and Case Keenum. Given the uncertainty around Washington’s receiving core, Quinn is the only one I am excited at all to draft. He’s going off the board as WR99 and 216.97 overall. Take advantage of that in early drafts!

Albert Wilson was the Dolphins best weapon before getting injured in 2018. He was averaging 13.83 PPR fantasy PPG, while every other receiver averaged less than nine per game. Wilson is a dangerous weapon that has the ability to do a ton of damage after the catch. Last year he averaged 12.9 yards after catch (YAC) per reception. Not only is that eye poppingly good, but second among Dolphins wideouts was Jakeem Grant, who averaged 6.7 YAC per catch. Every other receiver was fewer than four yards. Wilson is a very dangerous weapon, who the Dolphins have heavily invested in financially the last two seasons. Plus, with Danny Amendola out of town, he could see more run in the slot. You have to take him before Kenny Stills and DeVante Parker, according to Fantrax ADP, but he is the top target of mine in this offense.

Geronimo Allison played extremely well in the first month of the season. He averaged 7.3 targets, 4.8 receptions, and 72.3 receiving yards per game with two touchdowns in that first month. Sadly, he then missed time with a hamstring and groin injury, while also needing core muscle surgery. Now healthy, the hope is that Allison can win the job opposite of Davante Adams. His biggest competition seems to be Equanimeous St Brown, since Marquez Valdes-Scantling figures to play in the slot. Allison has flashed his ability and now has a shot to be a starter in an Aaron Rodgers offense that will no longer be led by Mike McCarthy? That alone is enough to get excited for. You can get him as the WR64 currently on Fantrax, which has the upside to be a big time steal in the later rounds.

I will continue to update my fantasy football sleepers list all summer long so continue to check back! The best way is to follow me on Twitter, @MichaelFFlorio.