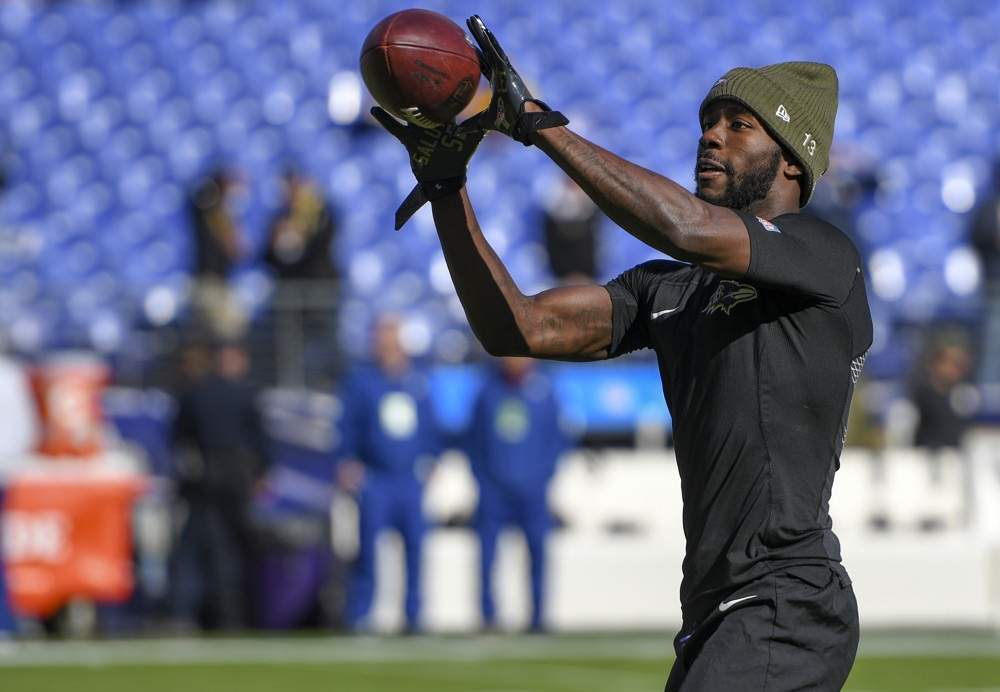 For the past two weeks, I have covered some of the more compelling names in free agency at the running back position. Lev Bell and Tevin Coleman topped those pieces but now we move onto the free agent wide receivers.

I really believe that the following players can have an impact on Fantasy Football next season if they land in the right situation. Robby Anderson and Geronimo Allison are restricted free agents at this point so I will leave them off for now.

The secondary wideout on a good passing offense will always have value. Stefon Diggs was the WR11 last season. Tyler Boyd was the WR16, and Calvin Ridley the WR19. Each of these offenses passes the ball in volume with quarterbacks that spread it around.

Let’s see if we can find a few players that can fit the WR2 role for their team next season.

John Brown had 558 yards through seven games last season for the Ravens with Joe Flacco. He finished the year with 715 yards even though he played in all 16 games. Let that sink in. The key here is that Brown played a 16-game season proving to Fantasy owners- and more importantly NFL teams- that he can stay healthy throughout an entire year.

The Chargers will lose Tyrell Willams to free agency so they will have a need for a field stretcher. If they do not promote Travis Benjamin, I like John Brown to slide into a situation where he could produce.

Golden Tate will be a free agent and the Eagles depth chart, after Alshon Jeffery and Nelson Agholor, is not very impressive. Brown would be an impact player on a very good Eagles team. In 11 games last season, Carson Wentz completed 37 passes over 20 yards down the field. Brown is a big playmaker and if Wentz can replicate any of his 2017 MVP-form, the Eagles will be flying again

Moncrief has yet to have a 1,000-yard season in the NFL. 2015 was his best year with 64 catches, 733 yards, and six touchdowns. Mediocre at best for the 26-year old. After a year in Jacksonville where he got paid $10m to share targets with Dede Westbrook, Keelan Cole, and D.J. Chark, Moncrief ended up seeing only 89 targets. In worse news, he only caught 48 of those passes.

It always felt like a weird signing that didn’t quite fit. With Marqise Lee back and under contract and Westbrook progressing into a reliable option, it seems Moncrief’s time as a Jaguar will be short-lived.

Someone will have to play wide receiver for the Raiders next season. Jordy Nelson is the only guy under contract so I imagine they will try and pair him up with a speedster. While injuries have slowed down Moncrief, he ran a 4.4 40-yard dash out of the NFL combine according to playerprofiler.com. Often times last year Moncrief was open on a go-route but neither Blake Bortles nor Cody Kessler could deliver.

But, Moncrief will be able to provide Derek Carr with an outside threat that can get first downs and occasionally win a 50/50 ball downfield. Of course, Moncrief does most of his damage in the red zone. An area of the field that Carr found Michael Crabtree often over a three-year span.

Same stadium, same problem for the other team on the North Bay. The 49ers go into 2019 with 32-year-old Pierre Garcon under contract and a bunch of young talent. Donte Pettis will take on a big role next season and I feel great about Trent Taylor now that Wes Welker has joined the staff as wide receivers coach.

Garcon’s future is murky at best and Moncrief would be a solid replacement for him. Moncrief can provide size and speed that Garcon does not possess and would complement the 49ers young core nicely.

Chris Hogan, Cordarrelle Patterson, and Phillip Dorsett are all unrestricted free agents in 2019. With Josh Gordon out of the league again, that will leave only Super Bowl MVP Julian Edelman and…(crickets).

Tyrell “The Giselle” is known as a burner in the NFL. His 15.9 yards per reception were 11th in the league last season. With Keenan Allen hogging all the targets, Williams put up 41/65 which is respectable. While the Chargers are a great fit for Williams, he will want to test the market and the emergence of Mike Williams makes Tyrell less of a priority for LA.

The Patriots would make Williams a flex-worthy play every week if he were on the outside in New England. Brady can still get the ball down the fieldd, but Williams is 6’4″ and can win contested slant routes too. I would pump the draft button all day on Williams as a Patriot.

See above. These teams need somebody. The Raiders notoriously love speed and the 49ers just need a body. You think Kyle Shanahan could find a way to use a big-bodied receiver who can get downfield and make plays? Hmmm where have we seen that before?

T.Y. Hilton deserves an actual threat on the other side of the field. The Colts have a need for a WR2 and Williams and Hilton would make a solid combo. Andrew Luck has been known to keep multiple weapons solvent in Fantasy Football. Hilton, Willliams, Eric Ebron, and the core of running backs on this roster would be even more imposing than last season.