When Bill James calls his shot, saying a player is “the next Albert Pujols, Miguel Cabrera-type hitter,” people listen. When he says that player is 22-year-old Rangers outfielder Nomar Mazara, people immediately start to wonder what he knows that we don’t. For those who don’t know who Bill James is, he is basically the O.G. of baseball analytics. He revolutionized the game and its use of advanced stats and sabermetrics. James, on a recent MLB Network interview, said “I love Nomar Mazara. I think he is a guy who has a chance to be a triple crown winner.” Incredibly high praise from one of the most respected analysts of all time. However, it’s also a little perplexing considering Mazara hasn’t exactly dazzled in his first two major league seasons.

Mazara, born in the Dominican Republic, has a long history of drawing praise from scouts and evaluators. At just 16 years old, he signed a $5 million deal with the Rangers in 2011. This means he was sought after on an international stage long before he was old enough to be drafted or really even drive. Mazara didn’t disappoint once he reached the States, hitting six home runs in 54 games while maintaining a .383 OBP in rookie ball as 17-year-old. He really hit his stride in 2015 when he shot up prospect boards by carrying a batting line of .296/.366/.443 as a 20-year-old between Double- and Triple-A. Mazaza would then enter 2016 as a consensus top-25 prospect, even as high as No. 5 overall on the Baseball Prospectus list.

When Mazara’s name was called by the Rangers in April of 2016, he responded by getting hits in each of his first three plate appearances, including a big fly hit so far that Jered Weaver didn’t even waste his time turning around to see where it landed. Mazara would go on to have an impressive start to his career, hitting .318 in his first 50 games as a big leaguer. However, he struggled from then on, sporting just a .235 batting average the rest of the way.

In two full seasons now, Mazara has yet to exceed the league average for OPS. His .739 OPS in his rookie year was the league average, and last season his .745 OPS came just five points shy of the .750 2017 benchmark. That hasn’t prevented Mazara from being an impact bat at the major league level, though. His 101 RBI last season were 17th most in baseball and added him to a short list of youngsters who have racked up 100 RBI in a season. Since 1990, only 11 hitters age 22 or younger have driven in 100 runs in a season. Among those players are Ken Griffey Jr, Alex Rodriguez, Carlos Beltran, Mike Trout, Albert Pujols, and Miguel Cabrera. To be fair, RBI is not a predictive stat by nature, but it does speak to how productive Mazara been even without living up to his full potential. 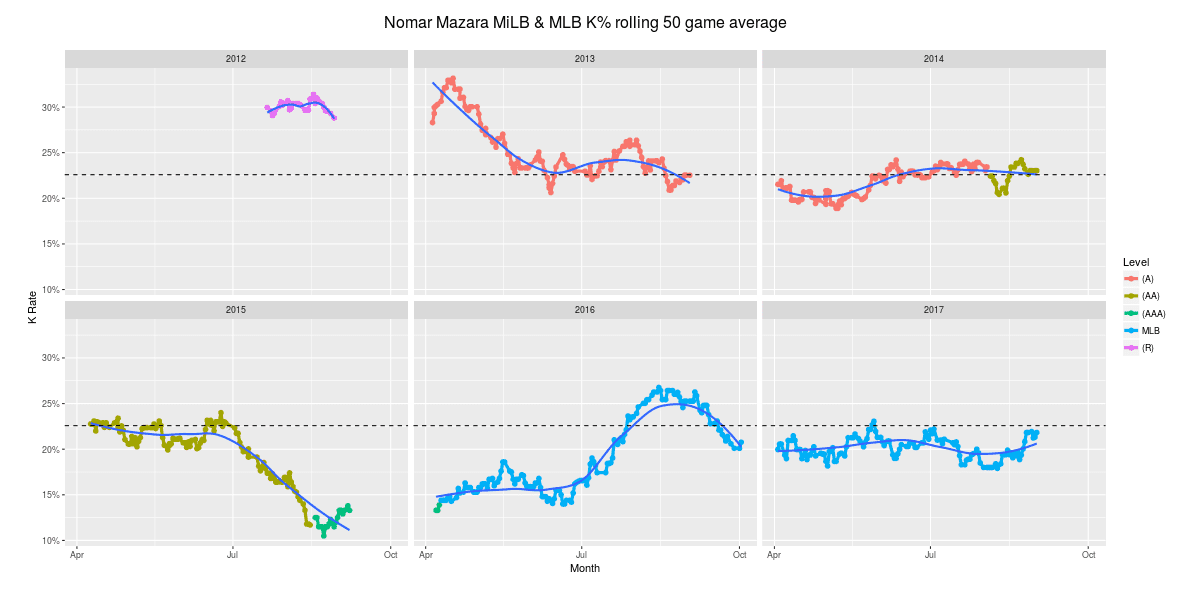 Given Mazara’s young age, his approach at the plate is fairly sound. His 8.9% walk rate last year was middle-of-the-pack, and he could definitely benefit from additional growth. He has actually managed to cut down on his strikeouts while competing at the major league level, if you can believe that. In his time in the minor leagues, Mazara’s strikeout rate was right around 22.5% on average, and in his first two seasons in the majors, he has reduced that number down to 20.2%. Off the bat, Mazara generates a very powerful left-handed swing, especially considering how many ground balls he hits. Mazara joined the likes of George Springer, Domingo Santana, and Lorenzo Cainas as players who had average exit velocities above 89 MPH but also a GB-to-FB ratio greater than 1.30 in 2017.

Mazara’s flyball tendencies changed a bit last season, increasing the flyball percentage from 30% in 2016 to 34% in 2017. Strangely, his home run production didn’t increase, leaving him with an unlucky home-run-to-fly-ball rate of 13.6%. This was unlucky for a few reasons. First off, he has displayed raw power in his exit velocity and average home run distance. In fact, Mazara had the seventh longest average home run distance among qualified hitters last year with a distance of 414 feet. Secondly, the average HR/FB rate for hitters with more than 500 plate appearances and an average exit velocity between 88-90 MPH is 16.2, which is almost spot on with Mazara’s 2016 HR/FB rate (16.4).

When Mazara isn’t hitting home runs, he sprays the ball pretty evenly around the ballpark, using his gap-to-gap power to drive in runners. His up-the-middle approach (39% Cent%) and launch angle (14.2 degrees) should lead to a higher batting average, but his disappointing 76% contact rate last year really held him back in that category. One of Mazara’s other weaknesses is his inability to do any type of damage against left-handed pitching. Mazara had a .228 batting average against southpaws last year, and his .603 OPS against them ranked 131st of 144 qualified hitters. In looking at his power production to date, 21% of his plate appearances have been against lefties, but only 5% of his home runs have come against them (2-of-40). If you look closer, you can see Mazara’s career zone profile versus left-handed pitchers and the resulting ISO in the image below. The average ISO in the major leagues last year was .171. Only two of the 25 zones in the image below are above league average, including the nine within the strike zone. 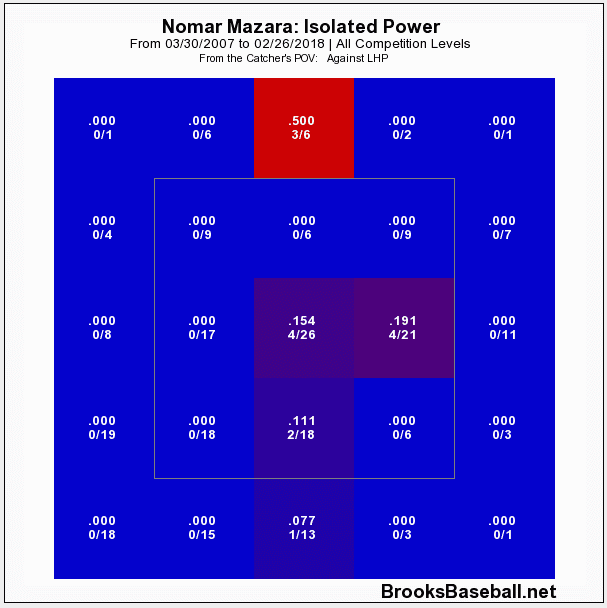 Clearly, Mazara has the potential to grow into a much better major league hitter, and it’s far from a reach to expect him to do so gradually over the next several seasons. At times, he has separately displayed skills like hitting for a high average or hitting for power, but he hasn’t quite been able to put it all together at the same time. If he is going to live up to Bill James’ prediction, his biggest hurdle is going to be the batting average. More power seems like a natural path with his tendency shift toward a higher flight path on batted balls and his unlucky flyball production from last year. I like Mazara to outperform his 25 home run Steamer projection by five to seven home runs, but I would be hard-pressed to expect higher than a .260 to .270 batting average. Mazara may be making progress a little at a time each year, but if he wants to fill the big shoes of hitters like Pujols and Cabrera, he needs to figure out how to be more effective against lefties, and that is a battle he may not be prepared for.