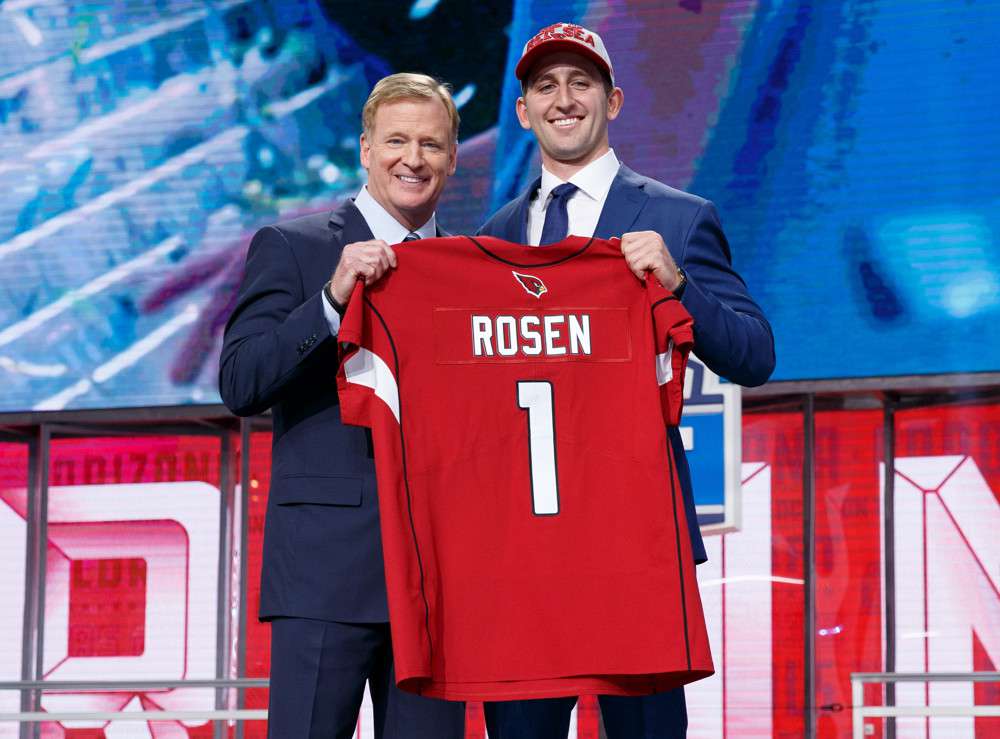 We made it! The 2018 NFL Draft has come and gone. Each team now has the task of determining how to integrate each prospect into their team. But let’s recap how some of the teams did. Positional value, roster gaps, and available draft capital all played a factor in the moves made by each franchise. Through a fantasy lens, we can determine which front office has improved or worsened their team’s outlook in 2018. The offensive skills players will be the main focus here, but the context of the pick will be analyzed. From this, we can find out who won and lost the 2018 NFL Draft.

(* – Trade occurred prior to selection)

Arizona was already identified as a QB-needy team entering the 2018 NFL Draft. It was only a question of who would be available at their original spot at 15. After the Bills traded up for Josh Allen, it gave the Cardinals a sense of urgency to move up for the QB everybody was watching: Josh Rosen. Even if Sam Bradford stays healthy, Rosen is the future.

At last. Here is what I've always wanted to see for QB prospects. This is clean pocket completion percentage by depth.

@PFF_EricEager has found (and I've replicated) that clean pocket passing is most predictive. pic.twitter.com/U3GLHtcdaw

He could still use some time to develop, but Arizona is clearly thinking long-term in his development. The same can be said about Christian Kirk. Kirk played primarily in the slot with aspirations to learn the nuances of playing outside. Retirement and the Hall of Fame beckon Larry Fitzgerald, but there’s no one better to bring Kirk’s game to the professional level. Chase Edmonds is an intriguing pick.

Edmonds is a small school prospect, but he has the makings of a solid third-down back. David Johnson owners don’t need to be afraid yet, but from a real NFL standpoint, a two-pronged running game attack is becoming the standard in the league. Once again, it appears the Cardinals are looking to develop their acquired talent and make a much larger offensive shift in the near future.

Von Miller is HYPE to be playing with Bradley Chubb pic.twitter.com/roRwjWF0HL

But it wasn’t just the defense that improved. Impending contract situations on both Demaryius Thomas and Emmanuel Sanders make them both cut candidates in 2019. Regardless of the loss of one or both vet receivers, Denver needed to address the position in the 2018 NFL Draft. Courtland Sutton was heavily mocked to Dallas after the release of Dez Bryant. Outside, inside, on the line or off the line, Sutton has experience in the position. He’ll most likely pair up with Thomas, as both have similar athletic and body profiles. Hamilton primarily mans the slot. His route-running prowess should give the Broncos piece of mind as they have their replacements for Thomas and Sanders. Fumagali’s skills as a tight end were previously discussed here. More of a Virgil Green clone, his fantasy relevance will be minimal, but his blocking will be much needed.

Royce Freeman has dynasty owners licking their chops. The Broncos just vacated 245 touches, and Freeman is a bigger, faster C.J. Anderson. He can function on all three downs and is a capable receiver. Devontae Booker’s presence will cause a camp competition, but it’s possible Denver has seen all they need to see. This will be a situation to monitor over the summer, as Freeman has the chance to take the reins in a revamped offense.

Why do we love the draft? For all of the lies told leading up to it, we get the unabashed truth straight from teams when they make the picks

The Andrew Luck saga has been one for the ages. His status is still unclear, but if you had any doubts, look at the team’s first two draft picks. Not quarterbacks, first of all, but offensive linemen. For whatever story we get fed between now and Week 1, the Colts must have confidence in the health of their franchise QB. That immediately boosts the value of the current roster with an additional bump to the rookies. NFL media and fantasy analysts are constantly covering this story, so owners should receive immediate updates as the off-season continues.

It’s an odd situation when you’re a team out of contention, but still trot out a 33-year-old running back. Most teams develop new talent or look to see what they have in depth. Marlon Mack got 93 touches in 2017 to Gore’s 261. With Gore in Miami, it’s possible Mack takes the job. But the additions of Hines and Wilkins calls that into question. This might remind fantasy owners of the Ty Montgomery-Aaron Jones-Jamaal Williams debacle from 2017, but the Colts have drafted very different runners. Hines is a light pass-catching back that can work on special teams. Wilkins’ power and balance are his main assets. The duality of the running backs plus Mack instantly creates a committee that will only frustrate fantasy owners. It keeps the Colts fresh at the position, but it gives fantasy owners a headache.

Fountain and Cain add excellent death to the receiving group. Both athletic and quick, their raw abilities would be welcome tools to Luck’s belt should they all take the field. But their lack of technical skill are a concern. Cain’s route running and red zone prowess is a bit more refined, but both need to develop at the craft. The Colts’ current depth chart is wide open for receivers of their caliber to play opposite T.Y. Hilton. This team should be closely monitored by all to gleam whatever nuggets we can before the season starts.

Let’s walk through this. Buffalo trades away Tyrod Taylor to Cleveland for draft capital. Understandable. The Bills sign A.J. McCarron to a two-year deal. It was assumed the acquired pick would be used to move them into an earlier first-round position for a quarterback. So Buffalo gives up two second round picks, moves up five spots for … Josh Allen. The QB with the largest flaws requiring time to develop. No upside as a runner, but a cannon for an arm. On a team filled with an assortment of slot receivers and Kelvin Benjamin. Oh, and they traded away Cordy Glenn (LG) and Richie Incognito retired (LG). This is fine.

In the case of Allen, it’s important to understand the scrutiny is less on the player, but the value of the capital used to acquire him. He could turn it around. But how far back have the Bills set themselves in the process? Their starting running back will be 30. Their backup talent is unproven. Until the players take the field, the road ahead appears to be a tough one.

The timing of Dez Bryant’s release appeared to have tipped the Cowboy’s hand as it pertained to their draft plans. Few prospects showed the potential to reach Dez’s talent, but Dallas’ draft spot put them in a reasonable location to draft a wide receiver at value. The receiver corp headed by Terrence Williams, Allen Hurns, and Cole Beasley needed (needs) a dominant presence on the outside. Their poor cap management, self scouting, and draft selections from years past finally caught up to them. Without any trade assets, they were forced to watch receivers fly off the board until they could draft Gallup. Not much of a surprise that Dallas was one of the few teams not to make any trades during the entire draft. And then Jason Witten said he might retire.

The additions of Michael Gallup and Cedrick Wilson are noteworthy. Gallup’s a solid route runner, and Wilson handled over 29% of his team’s air yards market share in college. Their college production begets NFL potential, but not the kind that attracts extra defensive attention. Especially in their rookie years. The remaining picks present depth at the remaining positions.

The Giants got Saquon Barkley, and Odell Beckham Jr. is coming back. Carson Wentz is returning to pilot the Eagles with a majority of their starters in place. The Redskins drafted high running back talent and stabilized their QB talent with Alex Smith. Every other team in the division has either improved or maintained their offensive talent. The Cowboys somehow dropped in talent and placed more pressure on their quarterback coming off a down season with below average pass-catching talent. Not what you want to see if you’re a Cowboys fan.

NFL and fantasy analysts derided the selection of Saquon Barkley at second overall to New York. Draft capital expended, positional value, and the team’s offensive line (15th vs. run, 10th vs. pass) were all concerns for the team and rookie. However, the Giants did grab a guard in the second round to boost their chances of success. It doesn’t make up for the pick, but it at least shows the team had some semblance of a plan. Seattle has a worse offensive line, had no draft picks in the second or third rounds, had needs in other areas and already had a functional starting running back.

So they drafted a running back with their first-round pick. To make matters worse, they didn’t make any additions to their offensive line until the fifth round.

They drafted a punter, though!

The franchise loses a dynamic receiver in Paul Richardson and an easy red zone target in Jimmy Graham to replace them with a running back. Bold. These moves show a team without a clear direction. It’ll make this tough for NFL fans, but ideal for fantasy purposes. An average defense with an efficient, mobile quarterback? Bombs away.

Got a different take on the 2018 NFL Draft? Let us know about on Twitter @Fantrax.