Last week, I rolled out my top sleepers for the coming season. Now it’s time to temper my enthusiasm.

Collectively, we fantasy owners can get too exuberant about certain players. Sometimes we put too much stock in an apparent breakout season. Other times, we don’t give enough weight to the previous season’s warning signs. Hidden trends can elude us.

Whatever the reason, the hype around certain players can get overheated. I’ve listed 10 players who are particularly at risk of underperforming based on their average draft position (ADP) to date. Each is currently being drafted in Fantrax leagues among the top 160 players overall, and five are being taken among first 100 players. If you go with the crowd on these players, you will likely have to take a risk with an early- or middle-round pick, but in each case, there are better alternatives.

For each player, I have included their ADP in Fantrax leagues. Now, let’s get started.

Gattis’ profile isn’t terribly different from that of many catchers being taken later in drafts. We can reasonably expect him to hit around .260 with home run power, but we can say the same about Wilson Ramos, Welington Castillo, and Travis d’Arnaud, just to name a few. While each could conceivably hit at least 20 home runs, what Gattis offers that the others don’t is a proven track record of hitting 25 or more home runs.

There is no disputing that Gattis has more upside than any catcher outside the top five, but he also comes with considerable risk. He is coming off his worst season of power production (12 home runs, 11.2 percent HR/FB, .193 Isolated Power) of his career, and his extra-base output was muted even before he sustained a concussion in early August. Gattis is coming off a late-season wrist issue as well. While there is no specific reason to think Gattis won’t be completely healthy, the effects of concussions and wrist injuries can have long-lasting effects. If Gattis’ playing time and production aren’t impacted by injury, they could still be affected by a crowded roster situation. If Derek Fisher gets close to regular playing time in the outfield, particularly against righties, will there be room for both Marwin Gonzalez and Gattis in the lineup? Astros manager A.J. Hinch could have an incentive to loosen Gattis’ grip on the designated hitter role in order to give Gonzalez and others more playing time.

Again, I can’t fault owners for pursuing Gattis’ unique upside, but taking him less than two rounds after Salvador Perez (130.27 ADP) feels like an enormous reach. I’d be happy to take the risk of missing out and winding up with Ramos or Castillo instead. Both are being drafted outside the top 200, and while they might offer a little less home run power, both have greater potential to help with batting average.

Smoak made huge gains in his contact rate and set career highs for home runs (38) and ISO (.259), and that catapulted him into the top 10 in fantasy value for first basemen. He currently ranks 11th at his position in ADP, so he is essentially being drafted based on last year’s performance, especially since he was leapfrogged by Rhys Hoskins, and owners are counting on a partial rebound for Miguel Cabrera. Given the depth at first base, it seems unnecessarily risky to assume that the 31-year-old Smoak will produce at a similar level to 2017. This is especially so when you consider that Smoak’s overall numbers were skewed by a red-hot stretch between April 29 and July 3 in which he struck out just 16.8 percent of the time and posted a .317 ISO. As nice as it would be to secure a first baseman who has a chance to hit 35-plus homers with a decent batting average, I don’t have to splurge for one in the first 12 rounds in a 12-team mixed league. Ryan Zimmerman (162,96 ADP) or Justin Bour (194.74), anyone?

Now that Moncada is set to spend his first full season in the majors, he could be ready to join the 20-20 Club. But is that enough to make him the 10th second baseman to come off the board? Though second base is not especially deep, there are other 20-20 threats outside the top 10 — namely, Ozzie Albies and Jonathan Villar, and a healthy Jason Kipnis could come close. Also, Moncada had difficulty making contact in the upper minors, so his 32.0 percent strikeout rate in last year’s rookie campaign was hardly surprising. We also should not be taken aback if he strikes out in at least three of every 1o plate appearances or fails to crack the .240 barrier this season. It will probably pay to wait a little longer to get one of the other power/speed options at second base or a better value overall like Scooter Gennett (226.93 ADP).

Shaw’s story is similar to Smoak’s, though he is more than three years younger than the Blue Jays’ first baseman. He had a breakout season in 2017, nearly doubling his home run output from the prior year and tacking on 61 points to his ISO. It’s hard to find an explanation that makes it easy to buy into Shaw’s massive power surge. In getting traded from the Red Sox to the Brewers, he inherited a power-friendly home park, but 19 of his 31 home runs came on the road. His average flyball distance increased only modestly, from 321 to 328 feet, and his expected home run total was just 25. Also, like Smoak, Shaw’s production tailed off in the second half, as he batted just .242 with 12 home runs.

As his second-half performance showed, Shaw is not a shoo-in for a high batting average, and the third base pool is rife with power hitters. Jake Lamb, Kyle Seager, Nicholas Castellanos and Eugenio Suarez could all provide similar power without being any worse (and possibly quite better) in terms of batting average. All are being drafted substantially later than Shaw.

The temptation to draft DeJong could be strong. Once the elites at shortstop are off the board, there aren’t many proven producers and even fewer proven power producers. Being able to select a shortstop with the potential to hit 30 home runs in the middle rounds may seem like too much to pass up.

There is little reason to doubt DeJong’s power credentials. He posted ISOs of at least .200 in Double-A and Triple-A, and with the Cardinals last season, he was in the top 20 percent of hitters in pulled flyball rate (min. 60 flyballs). His average flyball distance of 330 feet put him on a par with Jake Lamb, Jay Bruce, and Logan Morrison. Those same batted-ball tendencies make it unlikely that DeJong will bat .349 on balls in play or .285 overall. DeJong is neither a contact hitter nor a patient hitter, so without a high BABIP, he is essentially Addison Russell with a few extra homers. Even with the high BABIP, DeJong is virtually indistinguishable from Tim Beckham, who is being taken 90 spots later on average. For what it’s worth, Beckham actually profiles much more like a high-BABIP hitter than DeJong does.

On the surface, Ozuna had a much-anticipated breakout in 2017, demolishing previous career highs for batting average (.312), home runs (37), RBI (124) and runs (93). There was indeed a big change for Ozuna at the plate; he was much more aggressive with pitches in the strike zone, increasing his swing rate on those offerings from 66.5 to 73.1 percent. Yet, his strikeout rate increased, and meanwhile, his stats on batted balls were practically clones of his numbers from previous seasons. There was no discernible change in his ground ball or pull rates, and his average flyball distance was virtually unchanged as well.

Nearly all signs point to Ozuna regressing toward his 2016 levels. It’s always risky to surrender an early draft pick on a player who has played at a high level for just one season. It’s even riskier to do it for a player who has so many clear regression signals.

Perhaps owners will cool off on Pollock due to concerns over his production in the post-humidor era at Chase Field, but as his ADP stands, he will face an uphill battle to offer a full return on owners’ investments. While every returning hitter in the Diamondbacks’ lineup is likely to face some decline due to the dampening effects of the new humidor, Pollock seems especially vulnerable. Over his career, Pollock has been far more prone to hit for power at home (.195 ISO) than on the road (.157 ISO). Over the last two seasons, he has been more amenable to hitting flyballs than in the past, and last season, in particular, his home/road ISO split grew (.236 to .171).

After having established himself as a 20-homer threat, Pollock may not top 12 home runs this season. He could still hit in the .280s and deliver 20-plus steals, but that would make him only a shade more valuable than Adam Eaton, who is outside the top 30 among outfielders in ADP.

Quintana clocked in as the 30th-ranked starting pitcher in Roto leagues last season (per CBSSports.com), and this was in a season when he was far more of a strikeout pitcher than he had been in the past. To make it into the top 20, where he is currently being drafted, the lefty will probably have to improve in some way, but that doesn’t seem all that likely to happen. He will get the benefit of spending the whole season with the Cubs, so perhaps he can improve on last season’s 11 wins, but then again, he has been in double digits only twice. Quintana could chisel away at a 4.15 ERA, but owners should take note that his sub-3.40 ERAs from 2015 and 2016 were aided by elevated strand rates that he may not be able to repeat.

If a safe projection for Quintana is roughly 200 innings with an ERA in the upper 3.00s and around a dozen wins, there probably isn’t much separating him from teammate Jon Lester, who is being drafted more than 30 picks later. And that comparison holds only if Quintana approaches a strikeout per inning. He will have to bank on maintaining the gains he made last season in his called strike rate. Otherwise, his K-rate will likely regress, and he will have a difficult time finishing in the top 30.

Gonzalez is the Marcell Ozuna of pitching. He appeared to have a season that was far more productive than any of his recent campaigns, and yet under the surface, he looked to be the same pitcher he has been for several years. The one notable change was in his ability to induce soft contact. According to xStats, Gonzalez’s rate of poorly hit balls allowed rose from 21.8 to 25.3 percent. That alone, however, does not account for a decrease in ERA of more than a run and a half or a 16-point reduction of his WHIP.  Regression seems imminent, and that could leave the southpaw with an ERA approaching 4.00 and a WHIP above 1.30 to go with a merely good strikeout rate.

There is much to like about Osuna: an elite ability to get hitters to chase bad pitches, three straight sub-1.00 WHIPs, back-to-back seasons of 35-plus saves and a career-high 33.3 percent strikeout rate last season. There are also some concerning trends. His fastball velocity was down all of last season, and it sagged badly in July and August. His control also deteriorated, and in the second half, even his swing rate on pitches outside of the strike zone was a fairly pedestrian 32.9 percent. Even with all of that going against him, Osuna may not have deserved a 4.97 ERA after the All-Star break, but he was clearly not the same pitcher. 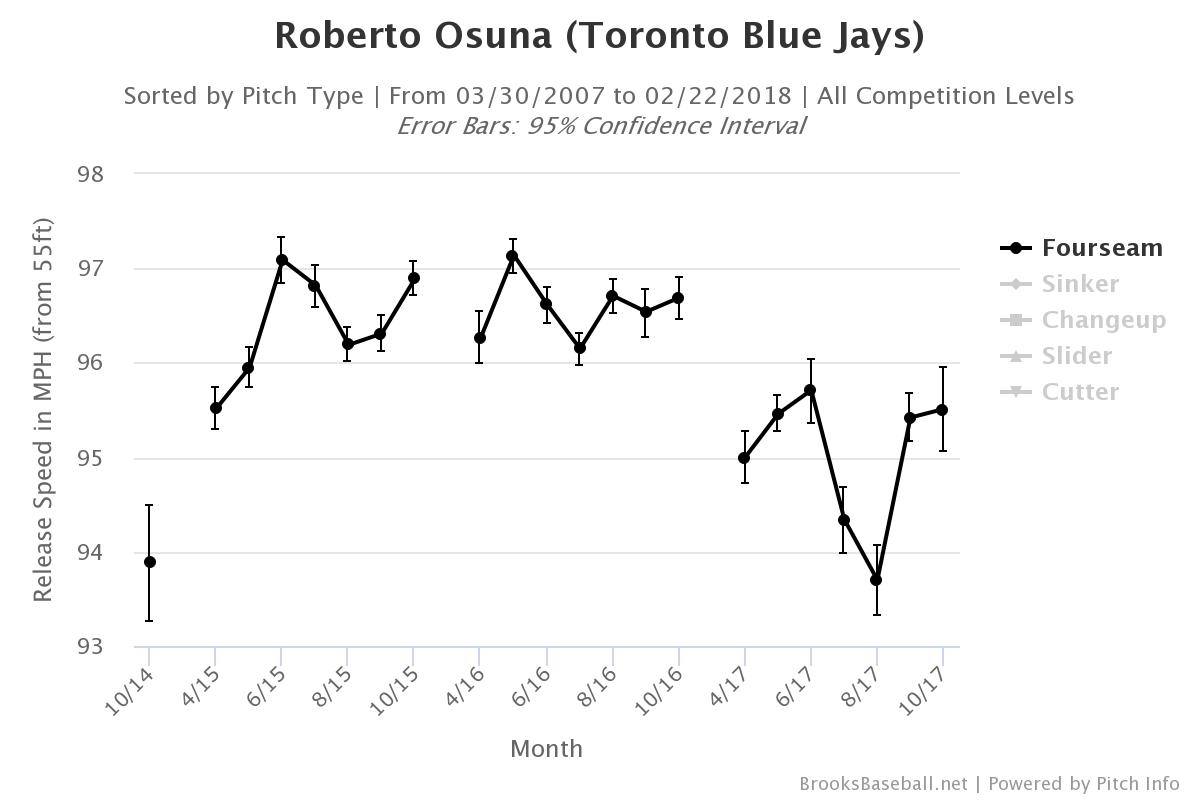 Maybe he will rebound, but when taking a closer among the top five, it’s best to ensure the level of risk is minimal. That is clearly not the case with Osuna this season, and with reliable options like Cody Allen, Felipe Rivero and Raisel Iglesias going later on average, there is no reason to reach for the Blue Jays’ righty.