Zach Eflin made improvements to his game in 2020 that made him a Fantasy relevant starting pitcher. It seems like Eflin has been around for ages, but he is just 26 years old and has steadily improved in each season since making his debut in 2016. Most notably, Zach Eflin raised his strikeout rate by over ten percent in 2020. While it was just 59 innings of work, what can we expect for 2021? Let’s dive into Eflin’s profile.

Over the last three seasons, Zach Eflin has seen a consistent drop in ERA. In 2020, it finally dropped below four. More impressive is Eflin’s FIP(3.39) and SIERA(3.50), which are strong ERA indicators.

Part of the reason his FIP is low at 3.39 is that it completely takes batted balls out of the equation. Eflin carried a high BABIP(Batting average on balls in play) of .344. For reference, the league average is .291. Part of the equation with his ERA being higher than his FIP could factor into the Phillies’ poor defense. With fielding out of the equation, FIP suggests that based on Eflin’s skills of strikeouts, walks, and home runs factored in, his ERA should be closer to 3.39.

SIERA is a more complex ERA indicator than FIP. It factors in balls in play, but the type of batted ball matters. SIERA is also a useful indicator and pegged Zach Eflin at 3.50. Using both FIP and SIERA, it is apparent that Eflin pitched better than his 3.97 ERA indicated. But let’s keep looking at his profile.

A large part of Zach Eflin’s success in 2020 was tied to his improvement in strikeouts. The question is remains, is it sustainable? Eflin saw a jump of over ten percent from 2019 to 2020. A 28.6 percent strikeout rate is excellent and ranked Eflin 17th among starters with at least 50 inning pitches.

Eflin’s swinging strike rate did improve in 2020 but was still below league average at 10.2 percent. This is the first red flag that I see in Eflin’s profile. Is his strikeout rate actually sustainable? A below-average swinging strike is concerning, but not as concerning as his 90.2 percent zone contact rate. That means hitters are missing less than ten percent of the pitches they swing at in the zone. Considering the league average of 84.2 percent, Eflin’s number is extremely high.

Finally, Zach Eflin posted a 29.8 percent called plus swinging-strike rate(CSW%). That is just above the league average and close to the 30 percent threshold, which is considered good. Despite the low swinging strike rate, Eflin still got a decent amount of called strikes, which boosted his CSW. Given the numbers, I would not expect Eflin to post a strikeout rate higher than 25 percent moving forward.

Zach Eflin did see a small improvement in his walk rate but nothing substantial as it dropped from 6.8 percent to 6.1 percent from 2019 to 2020. Eflin has a career walk rate of 6.3 percent, so his 2020 number was right in line with that. He also benefited from an increased swing percentage on pitches outside of the zone. Was this from a pitch mix change? We will talk more about that in a later section.

The other stat to note here is Eflin’s strong first-pitch strike rate. He has historically been very good at getting batters into an 0-1 count. For a career, that number is at 65.3 percent. In 2020, his first-pitch strike rate was just 63.7 percent, but still well above the league average of 59.9 percent. At this point, what you see is what you will get. You can comfortably expect Zach Eflin to post around a six percent walk rate moving forward.

Overall, Zach Eflin’s batted ball data was eerily similar to 2019. There is not a ton to dissect here as the numbers remained similar for the most part, except the increased groundball rate. I believe the increased groundball rate is due to a pitch mix change. Eflin began to use a groundball inducing pitch at a high rate that helped him get the ball on the ground more. What pitch is that? Let’s take a look at his pitch mix. 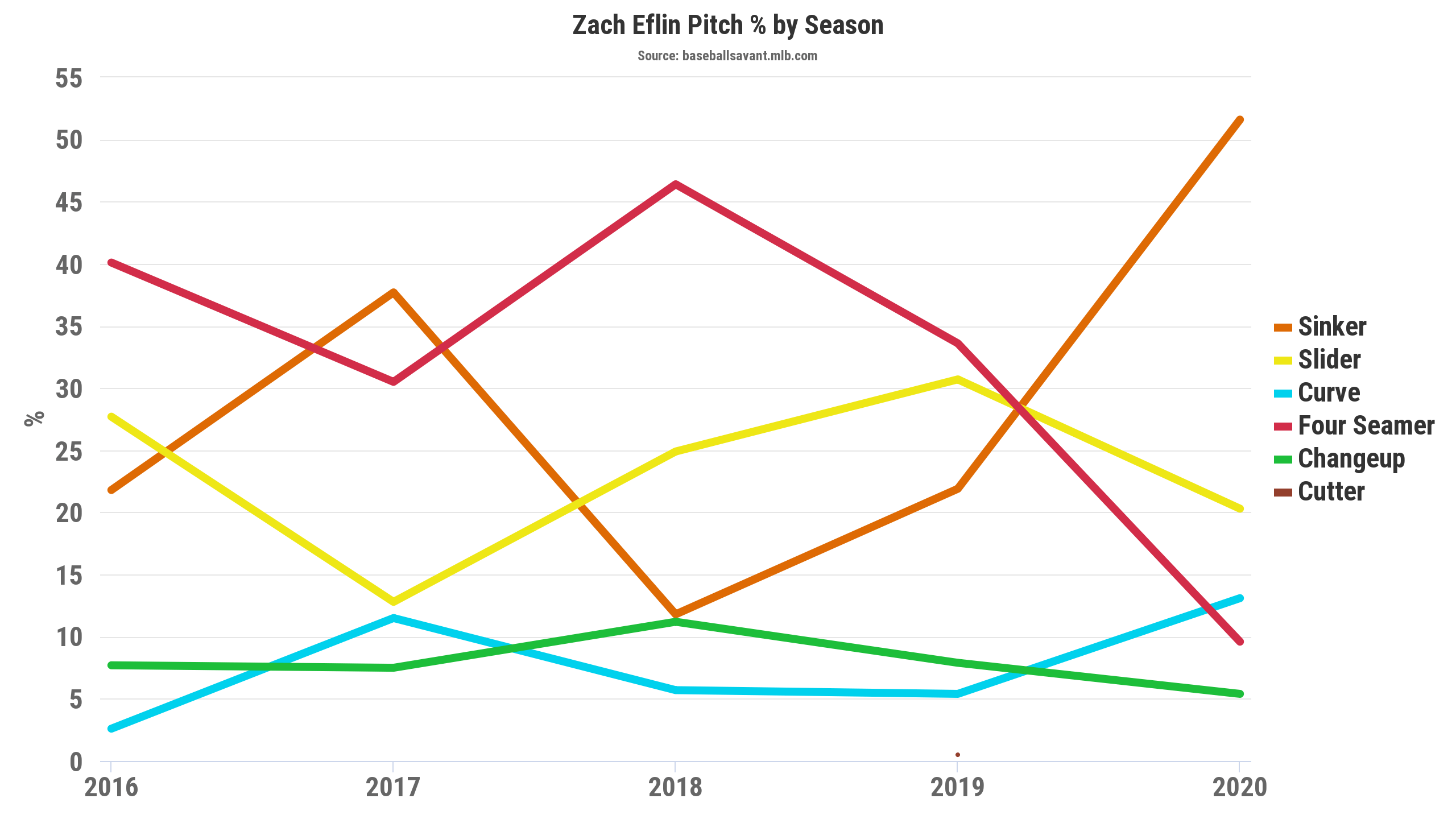 Right off the bat, you can see Zach Eflin began to use his sinker at a much higher rate in 2020. After using it just 21.9 percent of the time in 2019, that number jumped to 51.6 percent in 2020. Sinkers are natural groundball inducers. In 2020, Eflin’s sinker produced a 58.5 percent groundball rate. So naturally, if you use that pitch more, your overall groundball rate will increase. Other notable pitch mix changes are Eflin’s decreased four-seam usage and his increased curveball use. 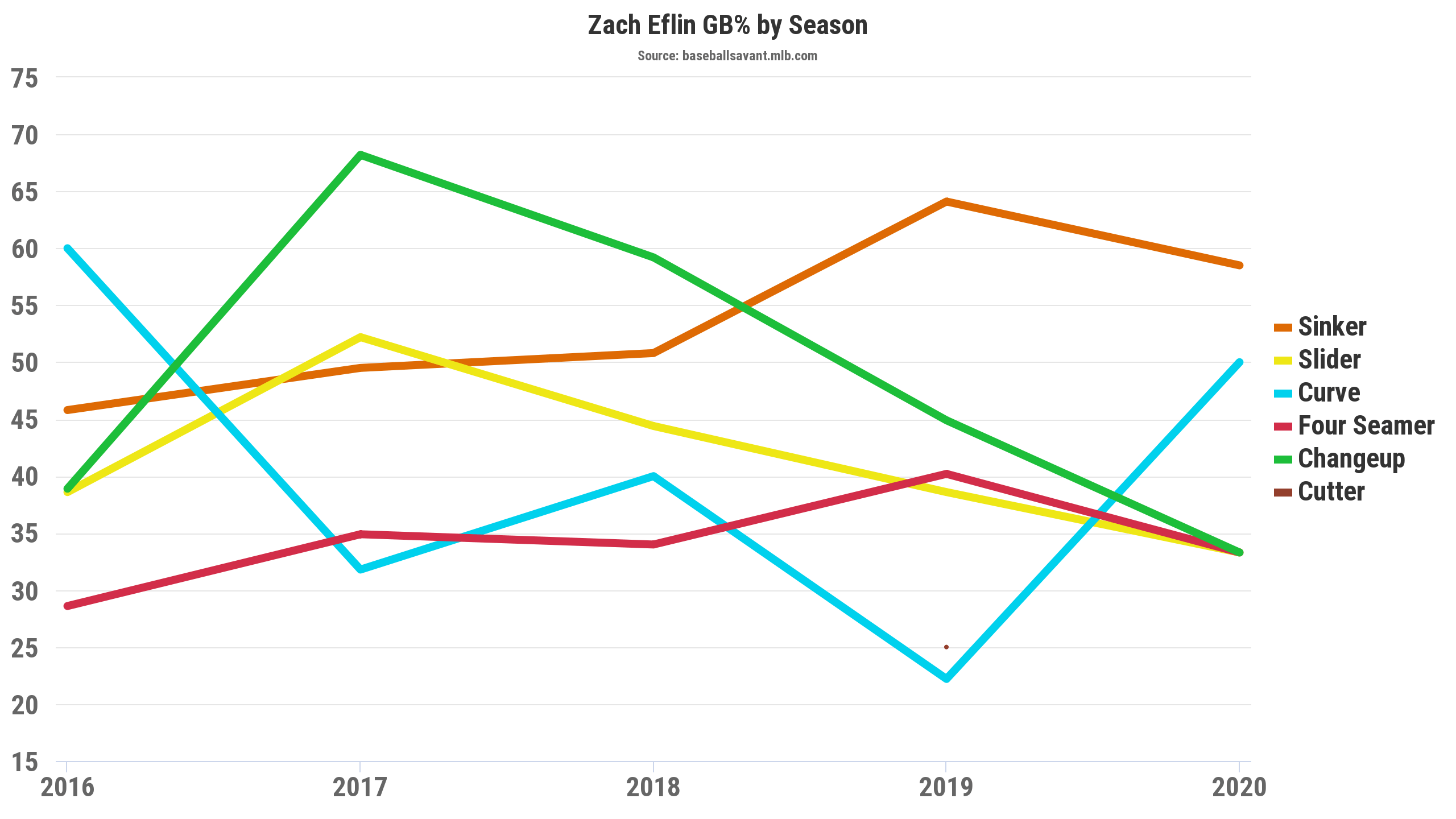 Zach Eflin also saw a nice increase in velocity on all his pitches. While it may not seem like much, seeing over half of a mile-per-hour in increase is significant. Eflin’s four-seam fastball averaged 94.3 mph as he began to use it significantly less in 2020. In a 60 game season, it is worth wondering if velocity gainers can maintain over a 162-game schedule. For someone like Eflin, who did not see a significant gain, it can likely stick. 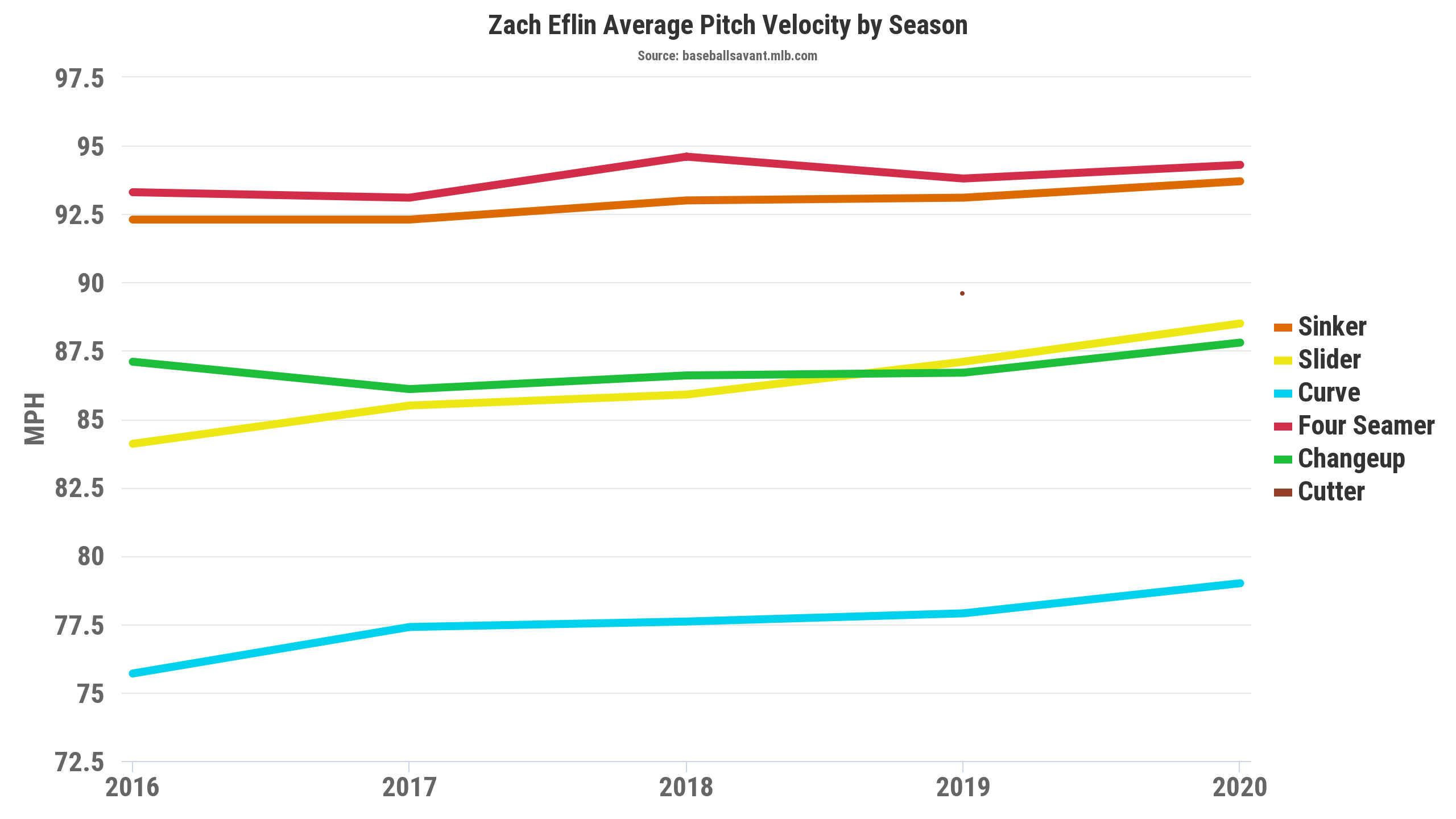 While there was no noticeable spin-rate improvement from Eflin like other pitchers like Trevor Bauer, he saw a nice increase in his pitches’ horizontal movement. Notably, Eflin’s sinker had some of the best horizontal movement of any starting pitcher in baseball. It will be worth monitoring if Eflin continues to use his sinker at a high rate in 2021. He could be in for a great season if he continues to use it efficiently and post above-average strikeout rates. 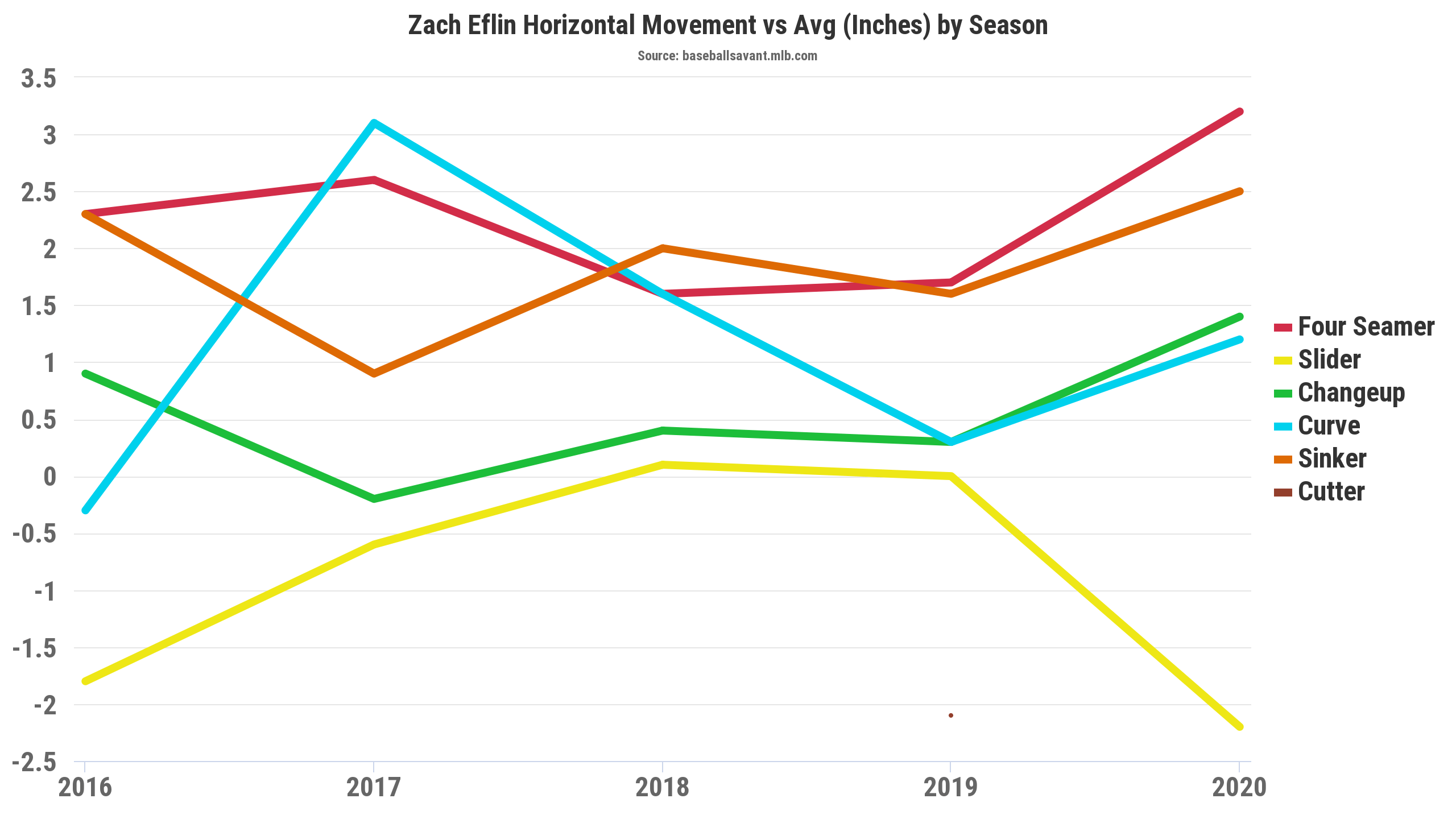 Zach Eflin rates well in many statcast metrics. He saw a lower average exit velocity at 87.4 miles-per-hour. Thanks to the increased sinker usage, Eflin’s average launch angle against dropped from 12 degrees in 2019 to 7.9 in 2020. His xBA of .224 and xwOBA of .271 also rated extremely well among pitchers.

Fangraphs and Baseball Savant both have a different measure of hard-hit rate. Using Savant, Eflin had a hard-hit rate of 32.7 percent, which rated better 76 percent of pitchers. Using Fangraphs Hard contact percentage, Eflin had just a 24.5 percent rate. That was quite a drop from his 2019 number of 37.9 percent.

Overall, the statcast data help support why Zach Eflin had an improved 2020 season. It looks positive heading into 2020 despite the small sample. What should you expect from him next season? Let’s find out.

In Justin Mason’s #2EarlyMock that involves nine different leagues, Zach Eflin has an ADP of 208.3. The high pick on Eflin has been 157 and the low being 241. It is clear people are unsure how to value him at this point. At that ADP, he is also the 70th starting pitcher off the board. This feels like a safe spot for Eflin, who could return solid value in 2021. I would not look to take him in the 150s as I do not think there is much room to profit in that spot.

If you can get Zach Eflin as your SP5 in 15 team leagues or SP6 in a 12 teamer, you should feel good. His projection hinges on innings pitched, which is extremely hard to predict after a shortened season. Outside of the innings, I feel comfortable projecting Eflin for an ERA between 3.80-4 with around a strikeout per inning. Getting that production after pick 200 is solid.

Wondering which breakout pitchers our FantraxHQ staff are not buying into? Check out our “Staff Roundtable” for in-depth analysis on those pitchers.