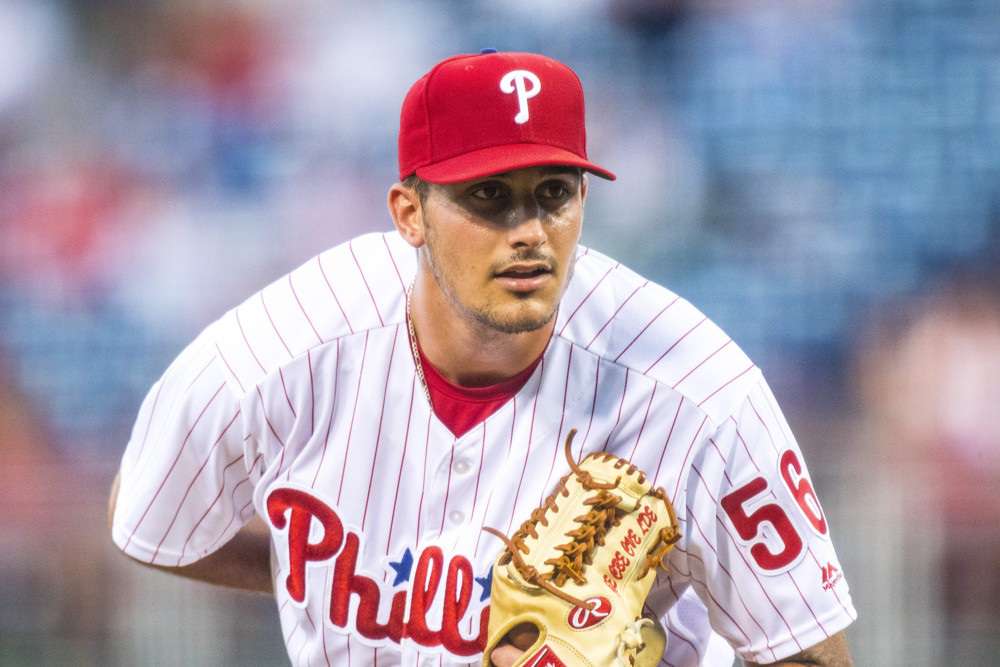 As we near the halfway point of the MLB season, Fantasy seasons are coming into focus. With trade deadlines approaching, buy-low and sell-high players are more important than ever. Today though we look at Zach Eflin and Ian Happ, a couple of buy-highs, whose projections indicate regression may be coming, but whose recent trends suggest might just be better players than Fantasy owners are giving them credit for.

Two Buy-High Players for the Second Half

Last week, I looked at a pitcher I would try to sell because of some discouraging Pitch f/x data. Today, the opposite.

Zach Eflin has been fantastic recently and his underlying numbers support a drastic improvement. Despite his mediocre projections (Fangraphs forecasts a 4.50 ERA from here forward), I’d buy Eflin as a player who has made legitimate strides that projections- by design- are slow to pick up on. This could be an opportunity to buy Eflin from owners who may think they’re selling high before he breaks out and cements himself as a true mid-rotation starter.

What they're saying: #Phillies wouldn’t give up Zach Eflin for Manny Machado, say asking price is 'too high' for a rental and they’re moving on https://t.co/e4x08VJ6OX pic.twitter.com/9Iz3fGX7u6

Eflin’s story has been told a few times, most recently by Matt Breen at the Philadelphia Inquirer. Pitching through a degenerative knee condition and struggling through a long recovery, Eflin’s poor early-career performance was impacted, in some way, by poor health.

Eflin is healthy now (save for a blister that pushed him early from his most recent start but isn’t expected to have lingering effects), and it’s showed this year. He’s nearly doubled his strikeout rate from last season, his walk rate hasn’t budged, and his 2.97 ERA is over three runs lower than the 6.16 mark he sported last season. Beyond the surface results, Eflin is working with significantly better stuff.

Most obviously, Eflin’s velocity is up this season. After sitting at 93.1 MPH last year (only slightly above-average for an MLB starting pitcher), Eflin’s four-seam fastball now sits at 94.6 MPH and the results on the pitch have changed accordingly. He’s getting more swings and misses and allowing significantly fewer home runs on the fastball, but more importantly, it’s allowed him to better set up his breaking pitches. The real key to Eflin’s breakout has been the development of his slider. Like his fastball, it’s a bit firmer this year, jumping half a mile per hour, and he’s been more consistent holding his velocity every start.

Even more importantly though, is the pitch’s movement. Relative to last season, the pitch has picked up an extra two inches of glove-side run, as well as two inches of drop. As Breen notes, Eflin’s spin rate on the slider is up by nearly 100 RPM.

While interpreting slider spin rate data remains a work in progress, the increase in velocity, movement, and spin all point to the same conclusion. Eflin’s slider is now a true out pitch and hitters have been flummoxed by it all season. Last season, according to Statcast, opposing batters were expected to hit .351 against Eflin’s slider, based on their exit velocities and launch angles. This year, it sits at .205.

Even Eflin’s command of the pitch has gotten sharper. He’s better clustering his sliders at the bottom of and just below the strike zone to the glove-side after too often missing well out of the strike zone with the pitch last season. Velocity, movement, and command are the three traditional ingredients of pitching. Eflin’s improved all three for his slider this year, and the results have shown.

It may seem too easy to call Eflin a completely different pitcher because he’s healthier than ever. Perhaps these bursts of performance are too easy to buy into. There is a reason the projections remain bearish on Eflin moving forward. After all, he’s never sustained anything like the performance he’s shown these past few months. His current 24.3-percent strikeout rate is the highest of his career at any level and his pre-2018 performances cannot be disregarded entirely.

All that said, Eflin’s never worked with this level of stuff before and he’s never pitched with as much strength before. So, it’s not too difficult to explain his improvement either. Eflin’s not likely to be a sub-3.00 ERA pitcher moving forward, but I would project him closer to his current mark than to his projected 4.50. I think it’s an opportune time to buy high on Zach Eflin before everyone fully believes in him.

Happ’s early-season strikeout woes had him on the verge of a demotion. The Cubs stuck with him and Happ is now sitting on a .252/.375/.452 line which is significantly above-average. His unsustainable .404 BABIP is obviously a big reason for that and Happ won’t continue to hit .250 while striking out at nearly a 40-percent clip. Understandably, some owners may sell, anticipating the inevitable regression. (No qualified hitter over the past five years has posted a BABIP north of .400, so, yes, regression is coming).

That BABIP regression might be offset, though, by an improved strikeout rate. Consider Happ’s rolling chase and contact rates. Happ simply no longer looks lost at the plate. He’ll never be a high-contact hitter, but his approach at the plate has improved significantly.

The player himself agrees. “I’m doing a better job controlling the strike zone, really only offering at pitches I think I can do damage on,” he recently told the Daily Herald.

Indeed, Happ can do damage. Consider Statcast’s expected weighted on-base average on contact, a metric that evaluates a hitter based only on their exit velocities and launch angles with no regard to their strikeout or walk rates. Happ ranks 11th by that metric, sandwiched between Matt Kemp and Paul Goldschmidt. Obviously, a player’s strikeout rate matters and Happ isn’t nearly the complete hitter that someone like Goldschmidt is, but Happ has shown special batted ball authority. Couple that power on contact with a better approach, and Happ has a chance to be one of the better offensive second basemen in baseball.

The batted ball results will regress, but Happ’s long-term profile looks a bit more stable than it did a month or so ago. If owners shop Happ for fear of the strikeouts, he could be an opportune buy, a player whose strikeout rate should fall into order in the coming weeks.