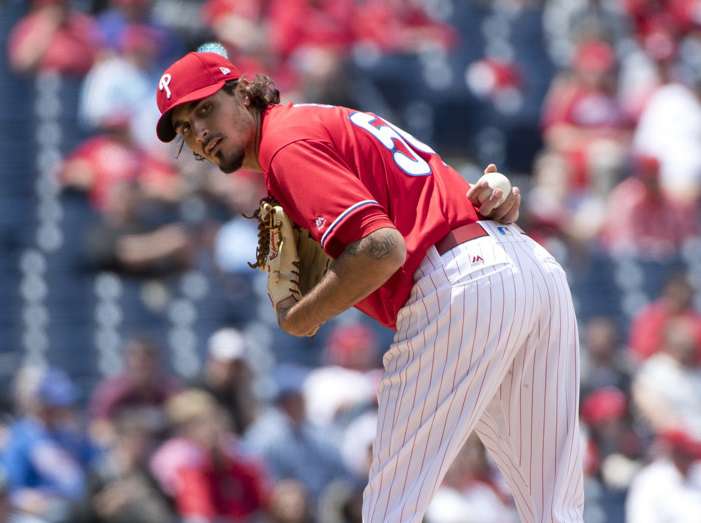 This week we’re traveling to the city of brotherly love! We’ve got not just one, but TWO starting pitchers from the Philadelphia Phillies staff. It’s an incredibly interesting staff there overall these days, and both of these starters are relative newcomers to the team. While Jake Arrieta was a big signing this offseason, Zach Eflin has spent around 60 innings with the team in each of the past two seasons, mired by ineffectiveness. The 2018 season has sent these two starters in unexpected directions, however, so let’s look a little deeper at these guys.

Alright, I’ve gotta give in. Back in the year 2017, I enjoyed the Zach Eflin suck train. Potentially just because it allowed me to establish the phrase “No Eflin Way” when offering up my opinion on rostering the young starter. That wonderful phrase no longer applies. On the bright side, it seems we have another fantasy-relevant starter to add to our rotations.

Eflin absolutely rolled in June, tossing 30.2 innings with a sterling 1.76 ERA/0.89 WHIP, 8.22 K/9, and 1.76 BB/9. It’s pretty impressive when your sub-two walk rate matches your ERA to the second decimal! He continued his dominance in his first July start, going seven strong innings with no walks, six strikeouts, and two runs allowed. Are we looking at a brand new Zach Eflin?

Eflin has always had good control, but where he is shining this year is in his new strikeout rate. In both 2016 and 2017, he posted sub-5.0 K/9’s of 4.41 and 4.90. Good luck finding a lower strikeout rate than that! So how on earth has he doubled his K%? First, we see increased velocity, which he attributes to strengthening his lower half over the offseason. The velocity on his fastball has jumped from 92.7 MPH in ’17 to 94.2 this year. He’s also managed to keep the velocity of his offspeed pitches about the same, creating a more effective velocity gap.

He’s also mixing his pitches differently. First, he’s been switching out his sinker for more four-seam fastballs. He’s using four-seamers 47 percent of the time this year, up from just 22 percent in 2017, with the sinker down to 12 percent from 45 percent. The batting average against on his four-seam has gone from over .330 in his first two seasons to .127 this year. While that is in no way predictive, it does tell us that his use of it has been effective.

That isn’t where the strikeouts have come from, however. He has also increased his slider and changeup usage to a combined 32 percent. Each pitch has over a 15 percent whiff rate, leading to a career-high 10.8 percent overall swinging strike rate (up from 7.3 percent in 2017). The whiff rate on his changeup, in particular, has skyrocketed from sub-5.0 percent to over 18 percent! This is where a larger velocity gap of over 8 MPH really helps.

Another area where Zach Eflin has excelled this year is in limiting hard contact. His 25.6 percent mark is the second-best mark in baseball among starters (min. 60 IP). He’s behind only Noah Syndergaard, and in the company of Aaron Nola, Chris Sale, and Justin Verlander. You may have heard of those guys. I’m certainly not saying he’s on par with those aces, but batters have been completely unable to square up Eflin’s stuff.

He has also trimmed his overall contact rate from 85.2 percent down to 77.9 percent. Opposing batters are making less contact in the zone, down to 84.3 percent from 90.3 percent. That’s important because even when Eflin is attacking hitters with stuff in the strike zone, he’s allowing less contact. This all adds up to a surprisingly legitimate emergence.

Of concern, however, is his 40.6 percent fly ball rate. Being a fly ball pitcher in Citizens Bank Park (a hitter’s haven) is no picnic, and Eflin thus far has managed to yield just a 7.0 percent HR/FB rate. League average this year is 12.6 percent, and his previous HR/FB% allowed were 13.5 percent and 18.8 percent. Everything points towards Zach Eflin giving up more homers moving forward, so he might be more of a 3.50 ERA pitcher than the 2.97 starter we’ve seen so far. However, that’s still a rock-solid starter when you factor in his K:BB rates, so he should be of use in all formats the rest of the way.

I mentioned in the intro that Eflin had been mired by ineffectiveness in his first two seasons. That also applies to Jake Arrieta’s tenure with the Orioles. Not once did he post an ERA under 4.60. Then, of course, he went to Chicago where he dined on bratwurst and deep dish pizza until he turned into a flat-out ace. He was the biggest signing of the offseason for a surprisingly formidable Phillies team, and to this point has been (mostly) a solid investment. His 3.54 ERA is nothing to sneeze at these days. So…why is he in the Ice portion of this write-up?

Well, since the start of June, Arrieta has tossed 30.2 innings and been knocked around to the tune of a 6.16 ERA/1.50 WHIP. His strikeout rate is a well below league average 6.2 K/9. Even his hard contact rate, which has always been stellar (sub-30 percent every season of his career) is at 32.7 percent over this span. What’s happening to Jake Arrieta?

Despite using his changeup more this year (9.4 percent) than any since his rookie campaign, the whiff rate has plummeted. 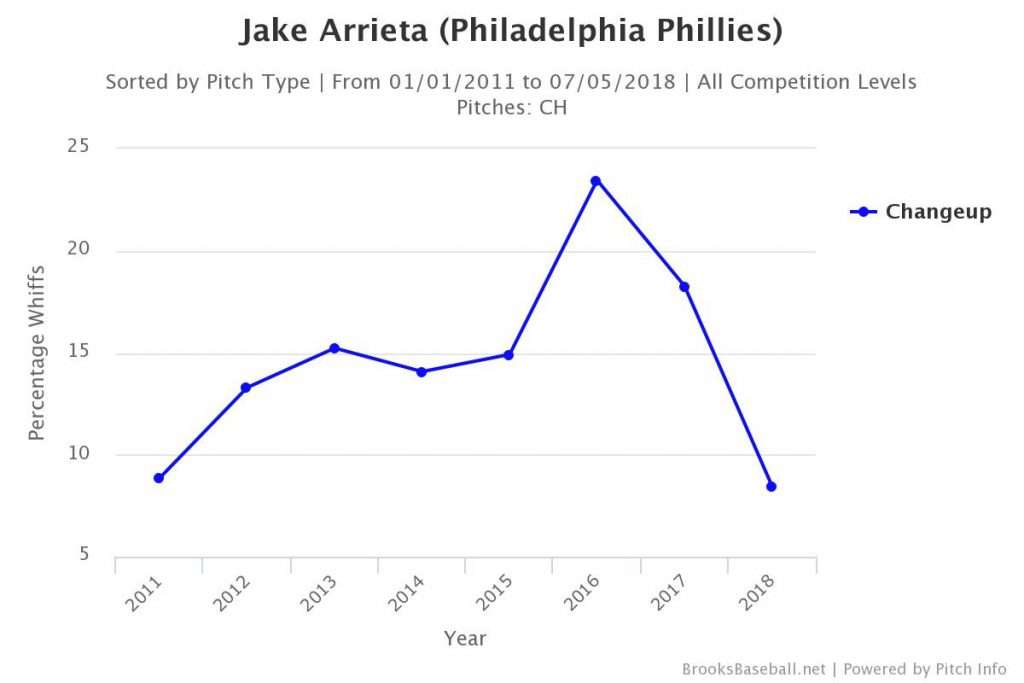 It’s been a very effective pitch for him over the last two seasons in particular, but this year isn’t missing many bats. It’s still a positive pitch per pitch values (1.20 pVal), but even the batting average against is nearly .100 points higher than it was two years ago.

Whereas Eflin has improved dramatically at missing bats, Arrieta has gone the other way. His contact rate is up to 84.5 percent from 80.1 percent last year (way up from 76.8 percent in 2016) and his 91.1 percent zone contact rate is way above the league average 87 percent. It’s not just a blip on the radar that his strikeouts are plummeting.

You could point to his very low 63.8 percent strand rate and weave a tale of better times ahead. While I don’t disagree that there is some positive regression coming in that regard, you have to take his newfound strikeout rate into consideration here. It’s a lot harder to strand baserunners when your strikeout rate is 16.4 percent. None of this is to say “Mother of Pearl, sell at all costs!!”. No, this is an adjustment period. We need to set new expectations for Arrieta. He’s more likely a high-threes/low-fours ERA type of starter these days, and one with a pretty awful strikeout rate. He can still be useful in fantasy, but not in the way we’ve come to expect. He looks like more of a back-end fantasy option moving forward unless he can make some bigtime adjustments.

We’d never tell you to abandon your fantasy baseball teams, but when you’re ready to get started on your fantasy football prep please check out the FantraxHQ Fantasy Football Draft Kit.