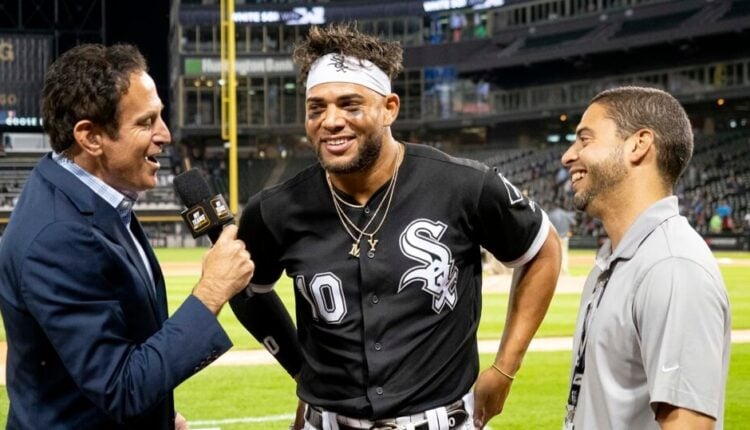 What is your opinion on Yoan Moncada heading into the 2021 season?

As can be seen, the consensus is that he is being drafted right around where he should be. Is this the correct approach? Or should fantasy managers be drafting the former stud prospect higher with the acceptance that 2020 was simply a lost season? Put your opinions aside for a minute and we’ll dive into his profile and examine what went right and wrong. Let’s get to it.

Despite his fellow teammates enjoying good to great seasons on their way to the playoffs, Yoan Moncada did not live up to par. In particular, he had career lows in terms of barrel rate, average exit velocity, xwOBA, Hard Hit %, Pop Up %, and Poorly Weak %. Consequently, he produced the worst numbers we have ever seen from the typically hard-hitting third baseman. The sharp decline that is the 2020 season is eye-popping. How does a hitter go from being one of the hardest hitters in all of baseball (90th-percentile Hard Hit%), to one of the worst (23rd-percentile)? 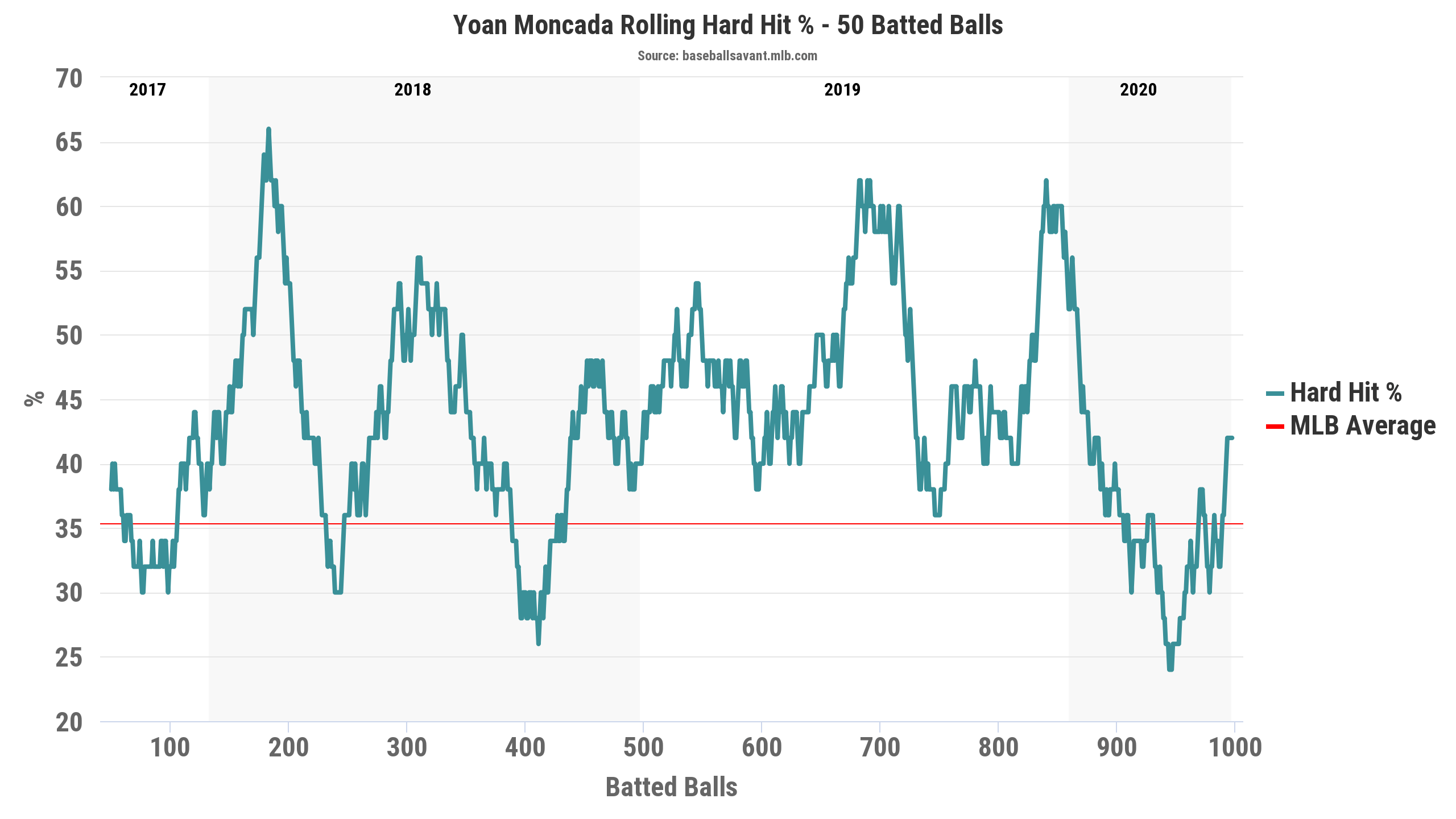 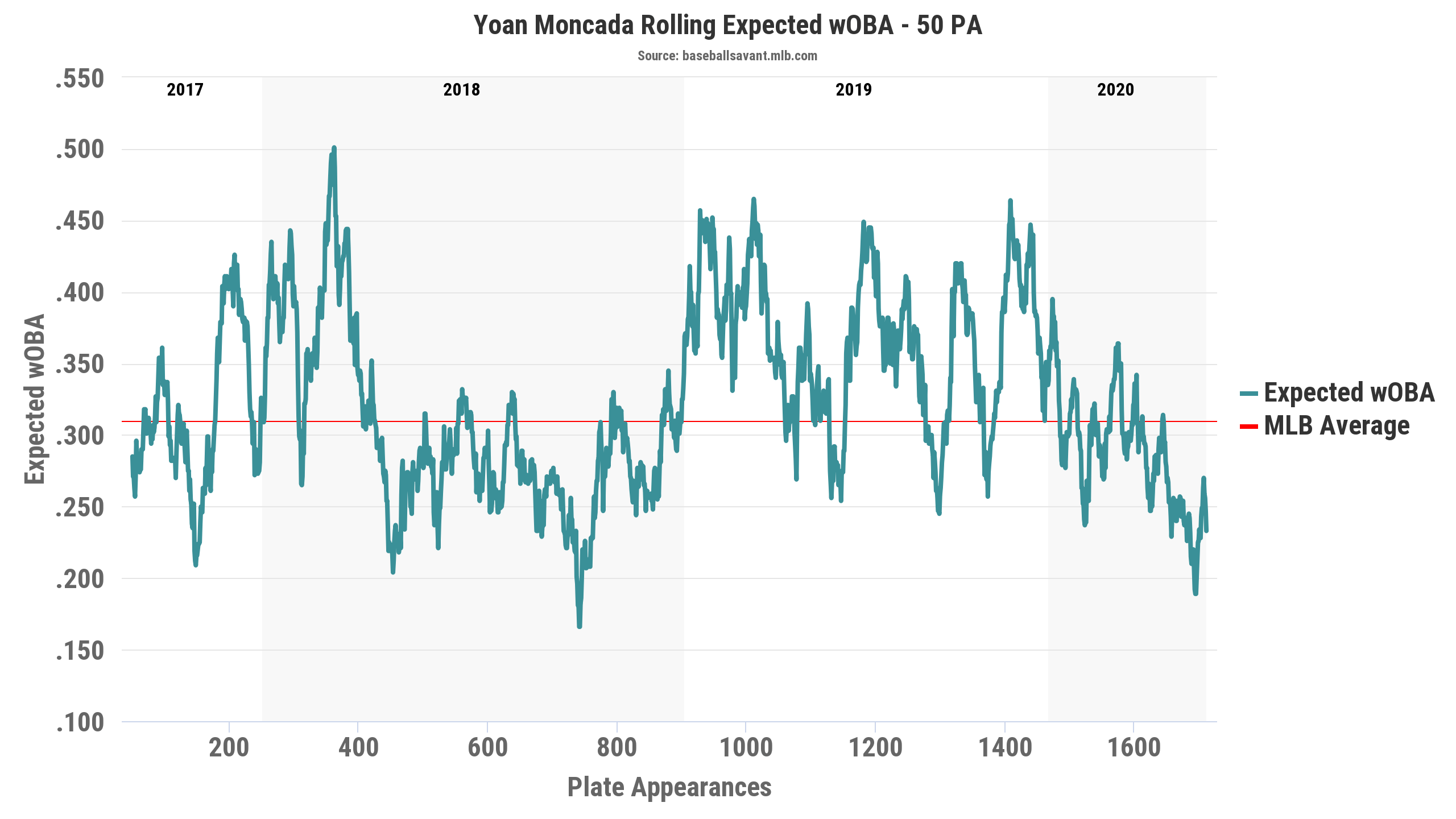 First, let’s not beat around the bush. Everyone knows what 2020 brought as it affected everyone single one of our daily lives. COVID-19 hit Moncada over the summer, right before players reported to their shortened spring training. Now he was behind a few weeks already. He was reportedly symptomatic, and it drained his energy throughout the entire season. While it may not be apply for some, this instantly validates 2020 being an outlier season for Moncada. While some players like Freddie Freeman enjoyed stellar seasons despite coming down with the virus, the fact we know so little about Covid-19 brings the question, why should we doubt Moncada was ever where he should have been physically?

Now that it is understood the primary reason for his struggles, the obvious first step is to look at his plate discipline. Were there any changes to his profile from previous seasons? First, and perhaps most surprising, is recognizing that his Swinging Strike rate, and Whiff rate were actually at a career-lows. 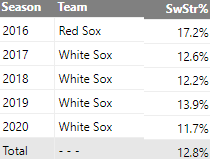 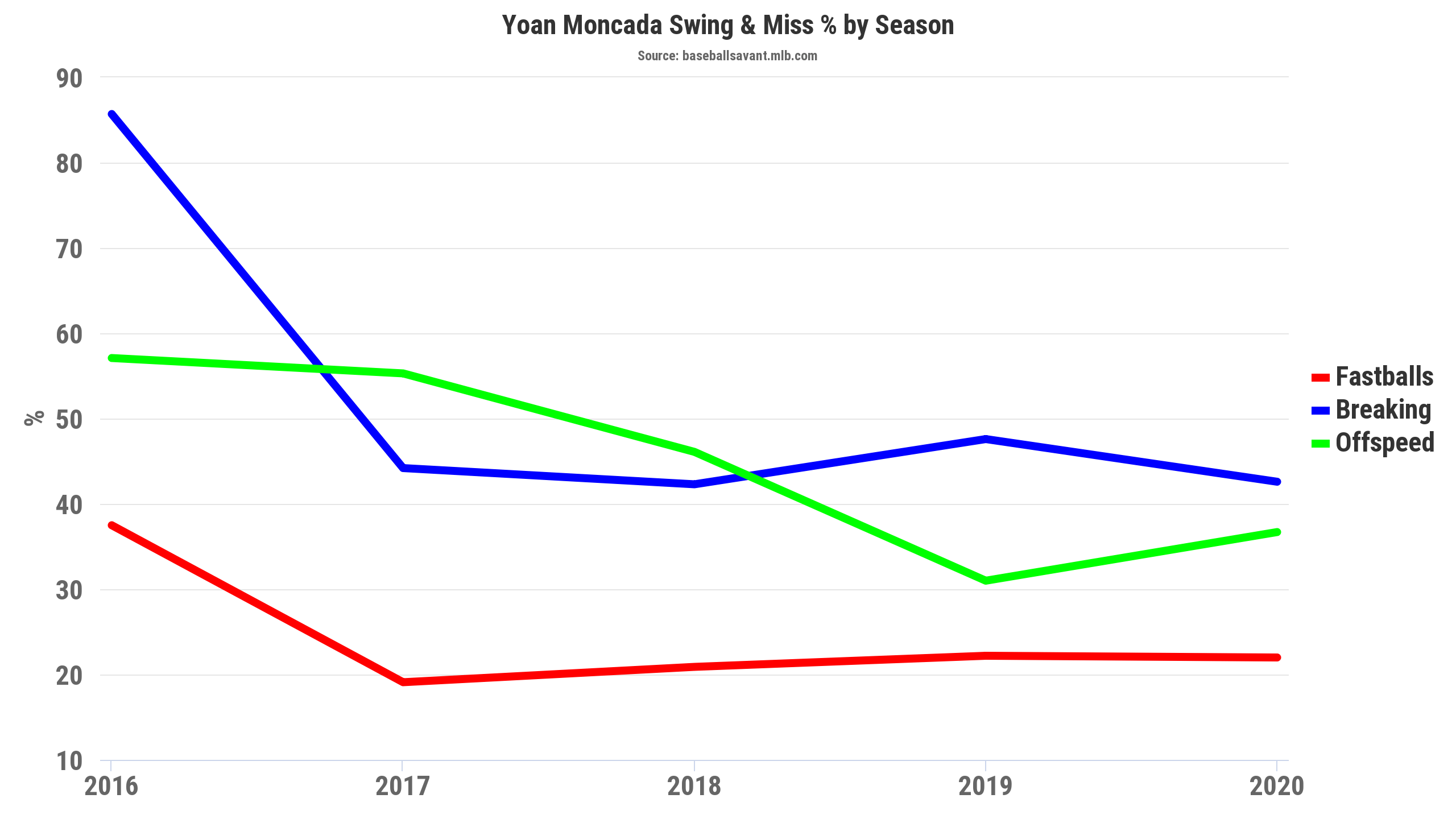 That is not normal for hitters who go through slumps like Moncada. While by no means is he a low swing-and-miss hitter, his swinging strike rate was down over one percent (11.7%), and his whiff rate was down nearly another percent at 30.8%. These rates are no not good by any means, but for a hitter that hit .315 across 559 plate appearances in 2019, one would expect him to have hit better than .225, even in a small sample.

His strikeout rate did take a bump up from 2019 to 2020, which explains the dip to an extent. He sat at an ugly 31.2% strikeout rate, while drawing a solid 12.1% walk rate. Those indicators perhaps showed one change in Moncada’s profile, that being that he was taking more pitches.

Looking further into his plate discipline, and the data 100% verifies this assumption. Look at Moncada’s career highs-and-lows in terms of plate discipline (highlighted in yellow, 2016 not counted):

That is a career-low Zone % (percentage of pitches thrown in zone), with a career-low Zone Swing %, and a significant decrease in 1st Pitch Swing %. This gives us a few possibilities to consider. First, Moncada simply wanted to be more patient at the plate. After all, he did draw a 12.1% walk rate, which was up from 7.2% in 2019. Second, he simply wasn’t seeing the ball well. Moncada himself even stated that after suffering from COVID-19 prior to the season, that he never got his energy levels back to where he was at in spring training. For those of you that have ever played sports, if you aren’t 100% committed and amped up, you can forget about being successful. And last, maybe the “juiced” ball in 2019 played a huge role in his hard-hit profile. Let’s examine his batted ball data to search for an answer.

When trying to understand why this happened, there was a noticeable factor involving his launch angle. First, as most anyone likely already knows, there are certain launch angles that are ideal for a batter to hit if they are to find success. Typically, a hitter wants to stay somewhere between 0-degrees and 40-degrees if they want to have their highest odds of reaching base. Of course that varies, as faster hitters can get into the negatives and still reach base at a high pace. But for this article, anything below 0-degrees, and above 40-degrees is a bad thing. Take a look at Moncada’s “poor” launch angle totals:

While 2018 sat in the middle, 2019 and 2020 are stark differences. The combined total of poor launch angles in 2020 was 49.2% of all batted ball events or half of his total BBE’s. In 2019, that number was at 35.2%.  Another scary outlier number was the fact that in 2020, Moncada actually had the highest batting average of those three seasons on negative-launch angle BBE’s. That was with the lowest average exit velocity on those BBE types.

Simply put, there are a lot of weird things going on in his profile that we aren’t used to seeing. He hit more popups than ever before, as noted by the rise in above 40-degree launch angle BBE’s. Also of note, his sprint speed was down and has been declining every year since 2018. Heck, even his average home run trot was down two seconds! Kidding aside, his sprint speed wasn’t significantly down relative to his own speed, but it did drop relative to his league mates.

Another eye-popping number is how bad he was batting right-handed. He had a 37.0% strikeout rate, a 25.0% soft-contact rate (on Fangraphs), and a .111 ISO. While he wasn’t much better batting left-handed, these numbers are downright grotesque. Moncada has always been better as a lefty, but these numbers were all time lows. If this trend continues, it’s time for the switch-hitter to consider pulling the plug and taking on lefties left-handed.

Overall, his batted ball data screams 2020 being an outlier year. Even 2018, where he struggled throughout the year, didn’t compare to 2020. Something wasn’t right with Moncada in the small sample that was 2020, and I’m willing to wager a drop in his energy level played a massive role in never finding his groove.

Let’s circle back around to the introduction, and tackle that tweet that asked whether or not Yoan Moncada is a value at Fantrax ADP 80.7. Simply put, I believe he is. If you combine 2019 and 2020, Moncada comes in ranked roughly around hitter 51 in terms of rotisserie leagues. Are there 39 better pitchers to draft than Moncada? No way. One could argue his 2019 season was not repeatable from a hard hit and batting average standpoint. But to counter, 2020 is not going to happen again. So even if we met in the middle, Moncada is already a value.

Now we factor in the fact that he is better than his 2020 version. He will run more, as he didn’t steal a single base last season. Another factor, the White Sox simply love the guy. He will hit at or near the top of the lineup against right-handed pitchers, and will have elite bats hitting behind him. Factoring in Nick Madrigal likely hitting 9th to start the season, and he is even going to have plenty of opportunities to drive him in as well. I would expect his counting stats to look something like .280 / 100 / 28 / 95 / 10. If we can get that sort of production, he will smash his ADP.

From a dynasty standpoint, I am willing to take Moncada with confidence before pick 50. He is still only 25-years-old, and while 2019 was a great season, we possibly haven’t seen his best season yet. As Moncada continues to grow, mature, and be a leader in Chicago, he should be the face of what could be the most exciting team in baseball over the next 5 to 10 years. If you can find an owner looking to sell low, take it and run. Yoan Moncada is a star in this league, and while his light is currently faded, it will ultimately shine through loud and bright for all to see.