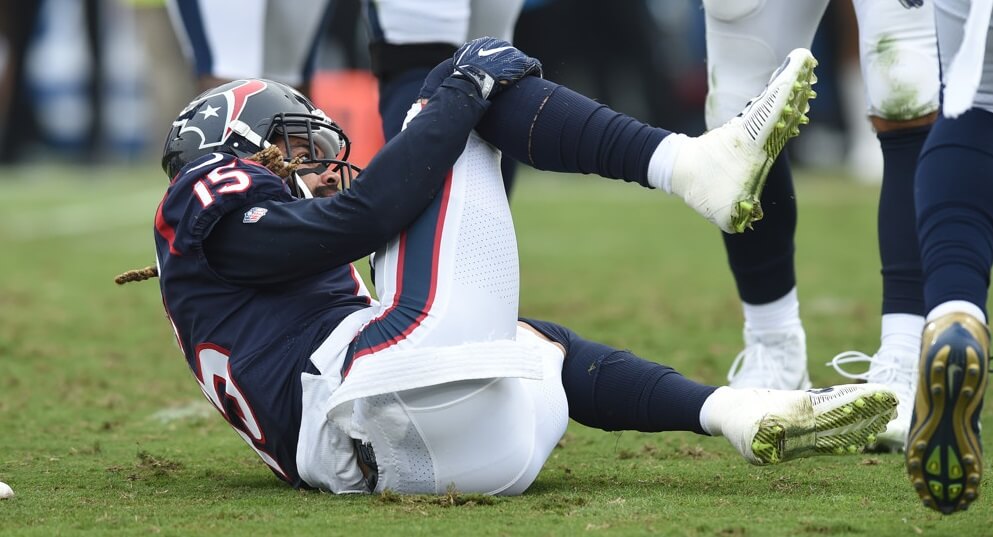 Chris Allen sorts through ADP and other historical data to identify potential wide receiver busts to avoid in your 2019 fantasy football drafts.

Wide receiver busts happen every season. That guy you spent all off-season touting just didn’t pan out. The talent may be apparent and all the news might have pointed towards opportunity. There’s always just…something we’re missing. It’s part of why we draft so many. The weekly target floor changes for ancillary receivers, but we still expect them to produce. When that doesn’t happen, we’re forced to reevaluate our draft process.

The term ‘bust’ gives off the wrong connotation. Especially for wide receivers. Talent or an assumed lack thereof isn’t always the explanation. A drop in quarterback play, a change in offensive scheme, or injuries to either the offensive line or other receivers could all contribute to receivers finishing below their ADP. So the task in identifying wide receiver busts isn’t solely about comparing ADP to year-end finish. There are some traits that we can use to identify potential busts in the upcoming season.

To get an idea of some potential 2019 wide receiver busts, let’s look back at some of the previous outlier seasons. A painful walk down memory lane, but it’s a necessary one to start the discussion.

Top-30 wide receivers over the past 4 seasons by ADP were compared against their seasonal finish in PPR formats. The delta is how we measure value. Ideally, this value would be positive. We want our receivers to beat their ADP. Projections and offseason news drive ADP, but we’re forced to adjust as situations deteriorate. From these examples, a few traits can be extracted that can be applied to the 2019 pool.

Touchdowns are mostly random events. Totals from a single season reflect exactly that. What happened that season. That makes it difficult to project yearly totals based solely on past performance. Some of the best in the game can help illustrate this point.

The coefficient of variation shows the amount of variability in a data set. The greater the value, the greater the inconsistency. Touchdown rate measures how many of a player’s targets resulted in touchdowns. The average receiving TD rate has been 4.9% from 2015 to 2018. If A.J. Green and DeAndre Hopkins struggle here, the same or worse must be true for everyone else. It’s here where we must look deeper into a player’s situation before drafting them at cost. That’s how recency bias takes hold inflating a player’s value.

Donte Moncrief’s 2016 season emphasizes this point. His 8 touchdowns on 56 targets boosted his value while he was still in Indianapolis. Andrew Luck’s injury diminished Moncrief’s 2017 outlook, but his nearly 41% reliance on touchdowns was a clear red flag. Any reduction in touchdowns without a significant target boost would ensure a drop in value. Moncrief’s poor 2017 season exemplifies how this can affect fantasy production.

The symbiotic relationship that exists between quarterbacks and receivers can’t be underestimated. Unquantifiable, but it produces immeasurable value. With so much happening before the snap, both players must be on the same page. Greg Jennings (formerly of the Green Bay Packers) talks about the need to be in sync for even the most basic routes and passes. From the film room to the field, any misread results in a missed opportunity. Mark Schofield (formerly of Inside the Pylon) has consistently discussed the need for real-time adjustments to be made seemingly without thought by both players due to timing and re-routing. Even Kirk Cousins, a quarterback that’s fallen out of favor within the fantasy community, recognizes the need for understanding how a receiver processes each play.

Athletic talent isn’t the only variable here. Defensive reads, small hand gestures, or even a lingering gaze take time to develop. Free-agent acquisitions, trades, and drafted rookies all experience this. Large-scale adjustments (learning the playbook) to small-scale nuance (quarterback audible) move a wide receiver from good to elite from both a real and fantasy perspective. It’s been a footnote in Sammy Watkins’ story the past 3 seasons. Allen Robinson experienced this on his move to Chicago. Talent will force its way into existence at some point, but the ceiling must be lowered regarding their season-long expectations. When we don’t acknowledge the importance of these changes we label these players as wide receiver busts, even though we should have seen it coming.

Injuries force us to reevaluate a team’s target distribution. The target vacuum created by the loss creates a spike in opportunity for the remaining players. But the spike is (hopefully) only temporary. Ancillary receivers propelled into primary roles are less likely to maintain their spot once the injured player returns. While their on-field usage may differ, talent begets volume which drives fantasy production. So, while a player may shine in someone else’s absence, narratives of co-existence or similar target share must be adjusted to account for the team reverting to its previous state.

Chris Hogan’s 2018 season gives life to this necessary adjustment. Even with Julian Edelman sidelined in 2017, Hogan only amassed 439 yards as the WR63. Edelman still had to serve a 4-game suspension, but Hogan was still being drafted as the WR19. Edelman had long held an average 25% target share within the offense. This directly conflicted with Hogan’s 76.3% slot rate in 2017. If Edelman was returning to the position that Hogan was occupying, it’d be difficult for the former third or fourth option to retain value. Offensive situations are difficult to project, but looking into a team’s prior usage can give us a clue on how they prefer to operate under optimal conditions.

Are These Our 2019 Wide Receiver Busts?

These traits give us the red flags to search for in the upcoming season. The players listed ahead fit some of these. However, it’s less about the talent but the situation that should prompt a deeper dive into cost.

Williams essentially missed his rookie season but finished 2018 with nearly 700 scrimmage yards. The yards were a solid sign he was over his college injury, but his touchdown total was an even greater surprise. Operating as the third or fourth option in the passing game, 10 touchdowns looks like an outlier when reviewing his 2018 campaign. They all came from within the 20-yard line which was 5th most in the league. But, on the other hand, he ranked 60th in targets from the same area of the field. Nearly a third of his 180 PPR points in 2018 is just from touchdowns.

He should absorb a portion of the 65 targets left behind by Tyrell Williams. However, Hunter Henry has returned from his ACL tear and (for some reason) Travis Benjamin still has a role on the team. Without a greater target bump, Williams’ 2019 cost has some risk associated with it.

There’s no question regarding what Fuller can do on the field. We’d just like to see him there more often. He’s missed 17 of a possible 48 games with catastrophic injuries. The latest, an ACL tear, was sustained in late-October of 2018. His deep targets accounted for one-third of his volume necessitating a clean bill of health before he’s put into our starting rosters. While each ACL tear is different, his rehab process should be closely followed to ensure the player and team are confident in his return to play avoiding the risk of a setback. His reliance on touchdowns also makes him one of our potential wide receiver busts.

Jones put up 1101 yards only two seasons ago and finished as the WR12. Since then, Kenny Golladay has established himself as the primary receiver and the Lions hired a new head coach that invested in supporting the run game via the draft. This doesn’t do much to instill value in a receiver who hasn’t had an aDOT under 13.5 in the past 4 seasons. His 2018 season also throws up two red flags.

First, he posted an 8.1% touchdown rate. That’s 52.8% over the league average in 2018. He also missed nearly half the season due to a knee injury suffered in Week 10 that required surgery. He’s still the de facto WR2 in Detroit, but it’s hard to determine the value of that position. Matt Stafford’s total attempts have been on the decline for multiple seasons and his total air yards were 20th in the league. His lowest ranking in over 3 seasons. Jones presents a risk for multiple reasons requiring more knowledge on both the player and the team prior to drafting.

Who are your wide receiver busts for 2019? For more great analysis check out the 2019 Fantrax Fantasy Football Draft Kit.