Why Marcus Semien Is Overachieving & Why xStats Can Be Deceiving 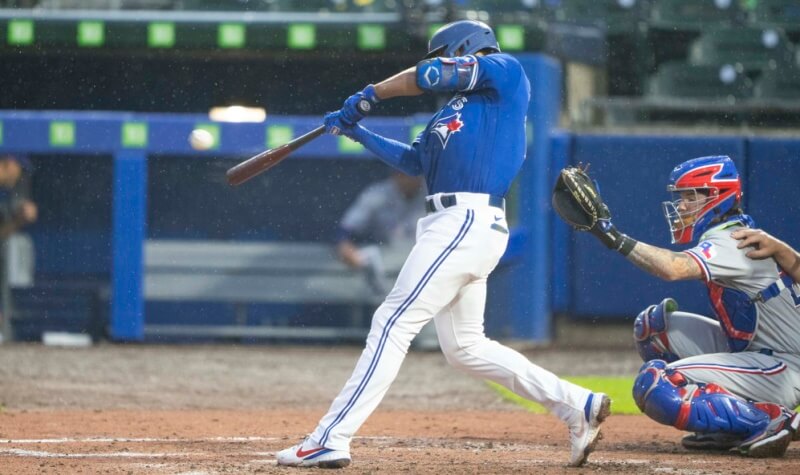 Can we sit back and appreciate how fantastic Marcus Semien has been this season? At the moment, the 30-year-old has a 137 weighted-runs-created-plus (wRC+), and ranks third in baseball in Fangraphs Wins Above Replacement (fWAR). Remember, this is someone who had to settle for a one-year contract last offseason!

Considering Semien ranked fifth in fWAR as recently as 2019, it’s not a shock to see him produce at such a level. At the same time, this was a player you could draft with the 121st overall pick in Fantrax leagues this past offseason. Now, per CBS Sports, he ranks second among all hitters in fantasy points. By this time next year, it’s safe to say that his average draft position will be cut in half, and then some.

Yet, to some, it will be difficult to buy into Semien’s outstanding season. His .375 wOBA is well ahead of his .331 xwOBA, while his 10.3% barrel rate wouldn’t suggest that he should be hitting for the power (.277 ISO) that he has thus far. However, that will just open up the value to draft him next year. There’s a method to his madness, and if you’re able to move past one expected stat, you’ll be able to benefit from his production in the future.

The Method To Marcus Semien’s Madness

There are more “easy-to-explain” reasons as to why Semien is producing at such a high level this season. His 10.3% barrel rate is the highest of his career, he’s hitting the ball harder (90.1 MPH) than ever before, and he makes great swing decisions (21.1% chase). Yet, there’s more to this.

At the end of every day, I like to watch every home run that was hit. Is this a strange habit? Perhaps, but who doesn’t love seeing great players accomplish great feats? Hitting a baseball traveling 95+MPH 400 feet remains one of the hardest things to do in professional sports.

Anyway, as you’d expect for someone with 38 home runs, Semien is one of the most frequent participants in those highlights. Sometimes, though, I have to check that I’m not watching the same home run over and over again; they all look the same! For perspective, here’s Semien’s hits spray chart for this season, courtesy of Baseball Savant: 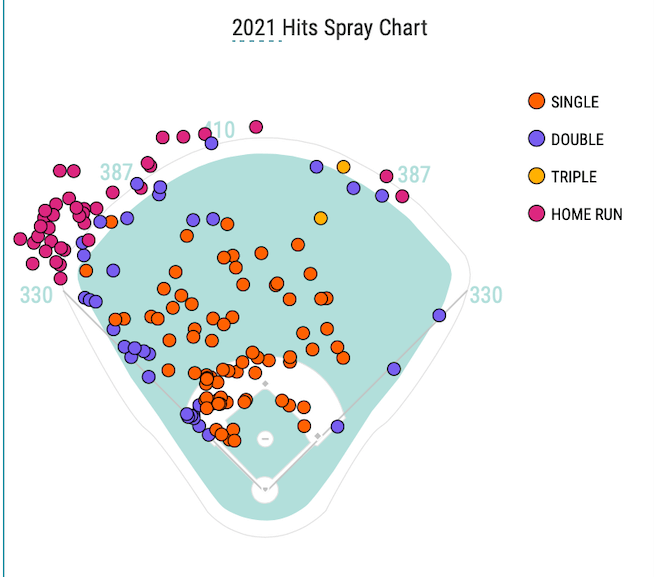 If he’s hitting a home run, it’s likely to be pulled right down the left field line, similar to this home run:

There are more numbers to back this up. Semien’s pull rate is up to 47.5% this year, while his flyball rate is up to 37.2%. Pulled fly balls have been found to produce better than other fly balls with similar batted-ball characteristics, so it makes sense Semien is manufacturing every little bit of power that he can. Hence, why his home/run fly ball is a career-high 18.7%.

So, problem solved, right? Semien is getting every little last ounce of his power by pulling his fly balls, which is why there’s such a gap between his actual numbers and expected numbers. Yet, while Semien may be one beneficiary from this line of reason, he isn’t the only one.

The Concept Of Overachieving Your Power Numbers

I referenced Semien’s high pull rate, which got me wondering; Is this a clear way to consistently overachieve your expected power numbers? After all, expected statistics don’t take into account where you’re hitting the ball, and if pulled fly balls perform better, then this would be a clear gap.

However, pulling the ball isn’t the only way to overachieve your expected power numbers. Currently, Baseball Savant has six batted-ball categories: barrel, solid, flare/burner, under, topped, and weak. For more information on these contact rates, I highly recommend reading Jonathan Metzelaar’s breakdown at Pitcher List. The one I wanted to focus on, though is “under” balls.

This trajectory of contact consists completely of higher fly balls (average launch angle 45.15, per Metzelaar), and generally doesn’t do well, especially for batting average (.072 BA). However, outside of the top-two batted ball trajectories, they’re actually the only one that produces home runs (1.1 HR/Batted Ball Event). If you can pull a batted ball in this category, it might have a chance to be a home run, as seen below.

This home run by Altuve was hit under 100 MPH (97.8 MPH) and at a very high launch angle (38 degrees) but manages to get out despite playing in a tough ballpark to hit home runs. Altuve, in fact, hit a home run with just an 89.4 MPH exit velocity on Wednesday. Thus, it comes as no shock to see he leads the league in “under” balls resulting in home runs.

A high under% has twice the correlation of overachieving your expected power numbers that pulling the ball does. While these balls don’t perform well on average, they can result in a home run under the right circumstances. For perspective, Altuve’s xwOBA on those six under% balls is .208. His actual wOBA? 2.011. Semien, meanwhile, has an even greater gap, with just a .141 xWOBA on these home runs. There’s not enough of a correlation to just say “high under% is good”, because that would be false. However, using context, we can see that certain hitters are quite strong when it comes to hitting for every little bit of power that they can.

If anyone has a better name for this statistic, feel free to rename it, but hey, Semien was the reason behind this study, right? Thus, the “Marcus Index” would appear to be an appropriate rate. For those who rank one standard deviation better than average (68th percentile), you’d expect their ISO to be 20 points higher than their xISO, a notable amount. Meanwhile, for those 1.5 standard deviations or better (about the 81st percentile), then that number goes up to 30. If you want to find out why a player is hitting for more power than they theoretically should, the Marcus Index is a great way to start.

NOTE: Only Players That Qualify For Batting Title In Terms of Plate Appearances

The #1 player on the Marcus Index? That would be Rhys Hoskins in 2019. His 98th percentile in under% and 81.5th percentile in pull% gave him a complete profile, and, what do you know; he overachieve his xISO by 27 points! Seven “under” balls were converted into home runs, and this was a similar case study in 2018. He’s cut down on his pull rate and under% since, but there was certainly a clear reason behind his success.

Another interesting deep dive here? Brian Dozier, whose 2015 season ranked 2nd in the Marcus Index. He overachieved his xISO by 50 points, in part due to an extreme pull rate (56.6%) and under% (33.4%); you wouldn’t expect a .208 ISO accompanied by a 5.9% barrel. From that point, Dozier continued to outperform his expected numbers, demonstrating that this can certainly be a sustainable ability. Batted-ball trajectory is relatively stable, unless there’s an approach change, increasing the predictive power here from one season to the next.

Current Examples (Every Player In the 81st Percentile In 2021)

Ranking high in the Marcus Index is certainly not a rarity for Jose Ramirez, with two top-10 historical finishes under his belt. He’s taken his pull rate (55.2%) to new levels this year, and although there’s a slight decrease in his under%, pulling his fly balls at such a high rate helps compensate for that. In fact, here’s a look at the players with the most pulled “barrels” for home runs this year:

Add in Adam Duvall (9th), and all of the top-five players in the Marcus Index, and six of the top-nine, appear on this list. It’s not just about “under%” balls; if your fly balls are pulled, there’s a better chance they will result in a home run, simply based on ballpark dimensions. This is the modern-day approach, and more hitters are likely to gear into it more over time.

To assess whether there’s some validity to the top-2o xISO overachievers in 2021, let’s see how they rate in the Marcus Index:

My main concern with Patrick Wisdom is his ability to continue to post a 16.7% barrel rate moving forward, but as long he’s pulling the balls he’s hitting in the air, he’ll at least continue to be a power bat off the bench. Meanwhile, Rafael Ortega has pulled eight of his 10 home runs, which explains why he’s overachieving his expected power numbers. In addition to Ortega, I’d as Josh Van Meter, Tony Kemp, and Francisco Mejia as xISO overachievers who at least look more interesting with this data point.

For more fantasy-relevant news, perhaps there’s hope for Mookie Betts despite his 7.8% barrel rate. He’s adopted a more pull-happy approach this year, and he’s still hitting for notable power (.233 ISO). I’d almost wish he’d have more even sprays and hit more line drives again to hit for more average, yet that’s neither here nor there.

The one player that I’d be worried about is Jared Walsh, but only to an extent. There doesn’t appear to be a reason that he’s hitting for so much more power than expected, outside of one factor: Angel Stadium. It’s the fourth-most friendly home run park for left-handed hitters, and, sure enough, he has an absurd 38.5% home run/fly ball rate at home this year; twice as much as it is on the road. Luckily, in fantasy, we only care about what his numbers are, and there’s reason to still be optimistic if he continues to take advantage of his home ballpark. There are concerns as to his struggles in the latter half of the year, though the ballpark seems to explain the discrepancy in actual stats and expected stats.

So, there you have it!

Marcus Semien is having a phenomenal year, and it’s time we don’t let expected statistics prevent us from acknowledging that. I’m perfectly okay with the jump in average draft position he rightfully should have, and frankly would be much more concerned about other factors (age, free agency) than the expected statistics.

Some players simply have the gift to maximize on their power by pulling balls in the air. This may not be reflected in expected statistics, but it is a skill. For the likes of Marcus Semien, Jose Ramirez, Nolan Arenado, and others, I’ll continue to believe that their ISO will be higher than their batted-ball quality suggests it should.

The more context we can add, the better, and it’s important that we tell the proper story of a player’s ability. Information like this is exactly why actual numbers correlate on a year-to-year basis better than expected stats, and why we shouldn’t settle for shortcuts in our evaluation process. Hopefully, the principle of the Marcus Index can be something you can utilize to gain an edge in your fantasy baseball leagues moving forward!