Which Hitters Could Thrive With Increased Playing Time? 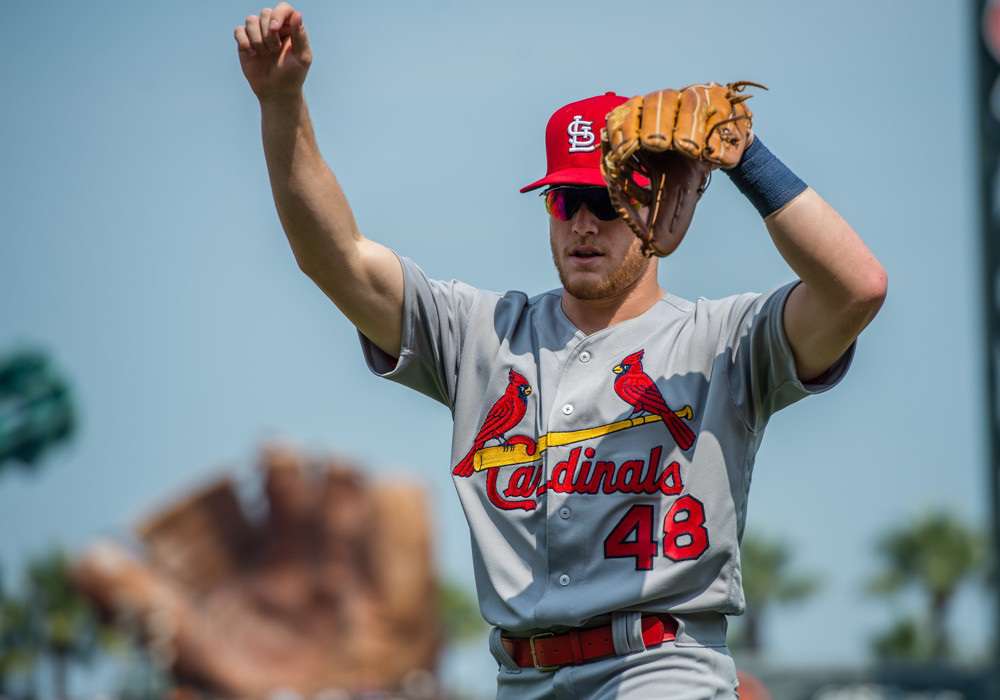 The non-waiver trade deadline is still several weeks away, but we’re seeing the first trickle of deals before the expected deluge in late July. Even relatively small trades like last week’s Jon Jay deal and Sunday’s Brad Miller-for-Ji-man Choi swap create new opportunities for players impacted by the fallout.

Then again, we don’t need to wait a month or more to see some skilled bench players get their opportunity for increased playing time. Injuries can open the door as well, as was the case when Yoenis Cespedes’ hip and quad injuries provided Brandon Nimmo with a chance to start every day.

In some shallower formats, the window has yet to close on picking up Nimmo from the waiver wire, as he is still available in about one-quarter of Fantrax and CBS leagues and two-fifths of ESPN leagues.

If you play in mixed leagues with 12 or more teams, who might be the next Nimmo? This was a question that on was on the mind of @AZsports73, as evidenced by this Twitter post.

@almelchiorBB Hey Al, how about an article or segment on players that COULD be very valuable IF they got the PT. Hansen SF, Marte AZ, Fowler Oak, Winker? Cin, Dahl Col?

Fine question, @AZsports73. It’s not too early to anticipate who might get an increase in playing time over the remainder of the season, whether because of a trade, injury or simply a level of performance that’s too good to leave on the bench. Ketel Marte and Dustin Fowler are already playing regularly, though both are worthy of picking up in most formats if they are available. David Dahl has upside, but not quite enough to stash while he is out with a right foot fracture. Alen Hanson and Jesse Winker appear to be on their way to becoming staples in their team’s respective lineups, and both are widely available, so they are ideal subjects for a column that focuses on hitters who are due for increased playing time.

And that’s exactly what this column is. Thank you for the idea, @AZsports73.

What follows are five hitters, including Hanson and Winker, who could have value for owners in mixed leagues with at least 12 teams if they can accrue regular playing time for a large portion of what remains in the 2018 season. Not all of them have a clear path like Hanson and Winker have currently, but all could put up useful fantasy numbers if they get the chance.

Note: Season-to-date stats are for games played through Sunday, June 10.

Alen Hanson did not play much when he was first activated off the 10-day disabled list on June 2, but he has now started three of the Giants’ last four games, each at a different position. That may be a signal that Hanson won’t need someone to get hurt or traded for him to stay in the lineup, as his versatility could allow him to serve in a super-utility role.

As a prospect, Hanson had appeal as a potential stolen base and batting average contributor, and in the latter part of last season, he delivered on the first part of that combination, stealing nine bases in 69 games with the White Sox. This season, he has added power to his skill set, blasting five homers, six doubles, and a triple through his first 66 plate appearances.

While Hanson is in the lower third of the exit velocity leaderboard, he is backing up his power with strong pull tendencies — especially against righties — as shown in the graphic below. Even if his approach leads to a sharp drop in his BABIP rate, Hansen is a good enough contact hitter to maintain a batting average in the .270s while potentially providing a dozen or more home runs over the final three-and-a-half months of the season. 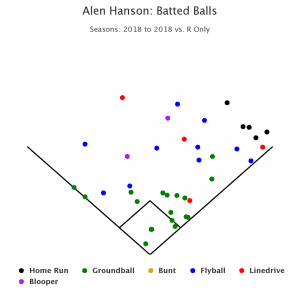 The power surge that Winker enjoyed down the stretch last season (five home runs in his final 60 plate appearances) is looking like a fluke. However, having homered in two of his last four games, he seems to be coming out of an extended power slump.

If home runs are what you need, you are probably better off picking up any of the four other hitters on this list, but if you need runs and on-base percentage, Winker is a fine waiver wire target.

He has only two more strikeouts (31) than walks (29) in his 214 plate appearances, and a history of strong plate discipline makes him a good bet to maintain an OBP close to his current .369 mark.

Winker has led off frequently this season, though Scott Schebler has topped the Reds’ batting order in the last four games. If interim manager Jim Riggleman reverts to putting Winker at the top, that could be a boon for his run-scoring.

Before going on the 10-day disabled list on April 21 with right elbow inflammation, Renfroe was platooning against lefties. He was activated on May 28 and has begun to pick up playing time in the last week, starting six of the Padres’ last seven games. Only two of those games featured an opposing left-handed starter.

While it may appear that Renfroe is already on the track to steady playing time, manager Andy Green will have a dilemma when Wil Myers (oblique) returns, possibly as soon as early July. Even before then, the potential activation of Franchy Cordero (forearm) could put a damper on Renfroe’s value.

It’s not clear how Renfroe will stay in the lineup, but if he doesn’t drop off much from his current .268/.351/.512 slash line, it’s hard to see how Green will keep him off the field. While he has pull tendencies that rival Hanson’s, Renfroe has a long track record of hitting with legitimate power, and he is just outside the top 10 percent of hitters with at least 50 batted balls in average exit velocity on flyballs and line drives this season. Even if Renfroe regresses in batting average and OBP, he could provide 15-to-20 homers over the rest of the season as long as he plays regularly.

Valencia’s career has seen its share of peaks and valleys, but it’s on the upswing again. His .198 Iso is his highest since his breakout 2015 season. His strikeout rate of 17.0 percent is his lowest in seven years, and his walk rate of 9.2 percent is a career-high.

Valencia has the most experience of any player on this list by far, so his season-to-date stats are the most trustworthy. While he has been inconsistent from year to year, Valencia has displayed home run power previously in his career. If he were to maintain his current .286 batting average, it would mark the third time in the last four seasons that he finished in the .285-to-.290 range.

Valencia had started six consecutive games prior to Sunday’s series finale at Toronto, and that was the largest such stretch so far this season. With the Orioles reportedly on the verge of a sell-off, it would seem that Valencia’s place in the lineup would only become safer as the season wears on.

Tim Beckham could return in roughly two weeks, and while that could send Valencia back to a reserve role, that may only last until Manny Machado is traded. If (or more likely when) that happens, Beckham could shift from third base to shortstop, opening up the hot corner for Valencia again.

How hard is it to crack the Cardinals’ starting outfield? Remember that only 10 days separated Tyler O’Neill’s string of three straight games with a homer and his demotion back to Triple-A Memphis. That might seem discouraging for Bader, but bear in mind that he was part of the logjam that kept O’Neill from staying in the majors.

After a brief spike in playing time in late May and early June, Bader has started only one of the Cardinals’ last five games. However, he could be just a Dexter Fowler, Tommy Pham or Marcell Ozuna injury away from playing daily.

With a 35.8 percent hard contact rate and an average exit velocity on flyballs and line drives of 91.8 mph, Bader has merely moderate power, and his current .265 batting average may not be far from his ceiling.

Over the course of a full season, Bader has the skills to be a 20-20 player. He has the fifth-highest sprint speed (min. 25 qualified runs) in the majors, and with only 125 plate appearances to date, Bader already has six stolen bases.