Staff Rountable: Which 2020 Breakout Pitcher Do You NOT Believe In?

With only 60 games played in the 2020 MLB season, we witnessed a plethora of breakout performances. Now, we have to sift through them all and decide what breakouts we believe in and what ones we don’t trust. That’s what we’re going to try and do today as we discuss which breakout pitcher performances we don’t believe in. Let’s just say, we’re probably going to stay away from these guys in our 2021 drafts.

According to early 2021 ADP, Marco Gonzales is being drafted as an SP3 and a top-40 SP overall. I’m not buying that. Don’t get me wrong, Gonzales had a fine season with a 3.10 ERA, 0.95 WHIP, and a league-leading 9.14 K/BB rate, but his profile hints that he pitched a bit over his head this season. 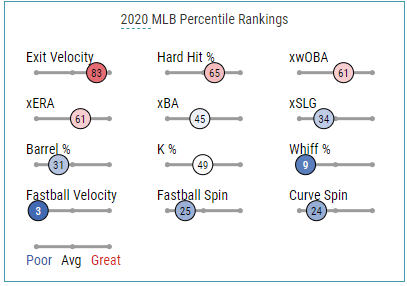 To start, Gonzales is far from a strikeout artist. Even his 8.3 K/9 and 23.1 K% seem unsustainable to me. As I’ve mentioned a million and one times with Dustin May, Gonzales has an arsenal that’s not indicative of higher strikeout rates. Gonzales features four pitches in his sinker, cutter, curveball, and changeup, with the sinker/cutter combination accounting for 69.6% of his total pitches thrown. Sinkers and cutters just aren’t big whiff pitches. Even Gonzales’ curveball and changeup didn’t garner a ton of whiffs, ranking 72nd of 90 (curve) and 102nd of 116 (changeup) for pitchers that threw enough of each pitch to qualify according to Baseball Savant.

When you only throw secondary offerings 30% of the time with well-below-average whiff rates, strikeouts just aren’t going to come easily for you. This arsenal is more in line with his pre-2020 strikeout numbers when he was around a 17% K rate and 7-7.5 K/9 for the most part. Gonzales has shown that he can keep his ERA in check in the 4.00 range, but he pitched a bit over his head this season as his xERA was 3.84 compared to his 3.10 surface ERA. A return to pre-2020 numbers is what I’m expecting. Is that good enough to be rostered? Absolutely. But is it good enough to draft as a top-40 fantasy SP as a SP3? Absolutely not.

I hope I am wrong about this because I enjoyed watching him pitch this season, but I think Kwang Hyun Kim is in for a bit of a fall in 2021. Kim is a crafty veteran who induces lots of weak contact, but his pitch-to-contact approach means that he will likely encounter more than a few bumps in the road in 2021. Of the 158 pitchers who threw at least 30 innings this year, Kim ranked 152nd in strikeout rate and 141st in K-BB percentage. Meanwhile, he had the 11th-lowest BABIP and the ninth-highest left on-base percentage. Kim’s 1.62 ERA is considerably lower than his xERA (3.81), his FIP (3.88), and his xFIP (4.52). Those metrics appear more indicative of the lefty’s real skill level.

Another factor to consider is that Kim (and many other pitchers in his division) had an incredibly favorable 2020 schedule. All seven of Kim’s starts came against divisional opponents. With apologies to Trevor Bauer, the NL Central sported some of the weakest offenses in the entire sport. All of Kim’s opponents ranked in the bottom 10 in the Majors in wRC+ and the bottom five in batting average. That will not be the case next season. Of the five teams with the highest wRC+ in all of baseball this year, four were NL teams residing outside of the NL Central. The line he posted against the San Diego Padres in the National League Wild Card Series (3.2 IP, 3 ER, 2 K) is the type of performance I would expect quite frequently out of Kim in 2021. I expect him to be no better than a streamer next season.

The breakout pitcher I do not trust is sure to ruffle some feathers based on some rankings and conversations I have seen on Twitter. Zach Plesac is the breakout pitcher I do not believe in. It was an interesting season for the 25-year-old pitcher, who was sent home from the team after sneaking out and breaking COVID-19 protocol. Despite the trouble, Plesac enjoyed a breakout season on the mound, posting a 2.28 ERA, a 0.80 WHIP, and 57 strikeouts in 55 IP. Do I believe that Zach Plesac can be a good pitcher in 2021? Yes. Do I think he is a top 10 or 20 SP like I have seen people pegged him? Definitely not!

What Zach Plesac has going for him is his ability to go deep into games. He went at least six innings of all eight of his starts and at least seven in five of those starts. Innings are valuable, so I do have to say Plesac will give you good volume. Diving into his profile, the first number that jumps out is a 91.7 percent strand rate. This is over 20 percent above the league average and is a completely unsustainable rate. Plesac’s BABIP of .224 was also well below the league average of .291. These rates likely would not have sustained over a full season and led to an inflated ERA. It is also worth noting that Plesac allowed nine earned runs over his final three starts.

Is Plesac’s command as good as we think? He made tremendous strides, seeing his walk rate drop from 8.4 percent in 2019 to 2.9 percent in 2020. A big part of this was Plesac’s major jump in his O-Swing at 36.9 percent. This 10 percent jump is likely to see some regression over a full season. The 8.4 percent walk rate in 2019 is an outlier compared to his Minor League numbers though. If hitters pick up on his pitches out of the zone, especially his slider, he could see the walk rate increase. I do not see a huge jump, but I could see Plesac walking five percent of hitters, which is still a good number.

Plesac also saw a huge jump in strikeout rate, from 18.5 percent in 2019 to 27.7 percent in 2020. His swinging-strike rate was encouraging at 14.3 percent and his CSW of 30.8 percent is good. Plesac did have a high contact rate on pitches in the zone at 82.8 percent. It will be hard for Plesac to sustain his high strikeout rate given his profile, but I would still expect between 20 and 25 percent.

It is also important to remember that Zach Plesac pitched in the central division where it seemed like every pitcher dominated. He faced the White Sox three times, Kansas City twice, Detroit, Cincinnati, and Minnesota. His big strikeout games of 11 apiece were against the two teams that struck out the most and forth against RHP, Detroit, and Chicago.

Don’t get me wrong, I do not hate Zach Plesac. I am just hesitant to put him in my top 20 starting pitchers after just 55 innings. I feel comfortable drafting him as a top 40 starting pitcher, which means I will have zero shares and that is okay with me.

We’ll also note that the velocity on his four-seam increased a mile per hour up to 97 mph in 2020. However, I prefer to see how Lamet performs over a full season and if the improvements even out. Unfortunately, Lamet also suffered a biceps injury in his last regular-season start. I hesitate with a two-pitch pitcher that typically struggled with command but then demonstrated a career-best walk rate. Thus, Lamet is the 2020 pitcher breakout I don’t believe in.

Marco Gonzales is my pick here. Now let me first say that I think Gonzales is a solid real-life pitcher and the type of pitcher that we don’t have enough of in today’s game. He goes deep into games, and he throws a lot of strikes. Surprisingly, if you run the numbers in 2020, Gonzales was a top 15 starting pitcher. It kind of came out of nowhere, seeing he has a career 4.05 ERA and 1.29 WHIP.

Looking deeper into his numbers, there were some things that changed. His strikeout rate did increase to 23.1%, which is still very low. He threw his sinker and cutter more while throwing his changeup less. His changeup has been a bad pitch throughout his career, so this led to more success as well.

However, looking at his baseball savant profile, it does not indicate a pitcher who is coming off a sub-3.00 ERA type of year. He was hit fairly hard, didn’t strike out a lot of people, and actually gave up a career-high line drive rate. There are just too many supporting metrics that don’t buy Gonzales. If he is a middle round draft pick like I’d project, I’m not touching him.