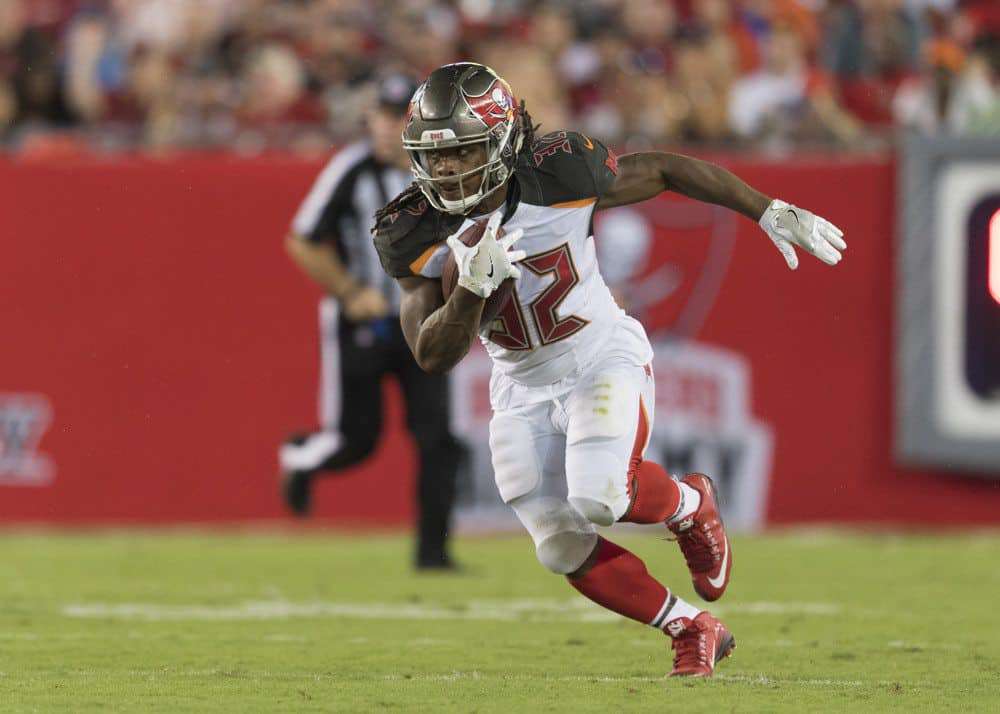 Last week in the Fantrax weekly top-10, we covered the top rookies for the upcoming season. This week we focus on some potential star running backs just waiting for their opportunity to shine.

We’ve all had to deal with a top running back going down for a period of time. It sucks, but it’s part of fantasy football. That’s why top running back handcuffs are so important. They’re basically the equivalent of top prospects in baseball, to a degree.

Whenever a running back gets injured over the weekend, you know damn well that his backup is going to be one of the most added players on waivers the following week. Staying ahead of the curve and drafting a top running back handcuff can sometimes pay huge dividends, especially if own the starting back as well.

There are three main things you should look for when looking to draft a handcuff in the late round.

All three of the above play a huge role in how the below list was assembled.

Should Already Be Drafted in Most Leagues Due to Current Role

Anyone on the Jets – This team is going to be a dumpster fire.

Now that all of that is out of the way, here are the top 10 handcuffs for the 2017 season.

Listen, when it comes to running backs, Frank Gore is like 100 years old. Compared to most running backs, Gore is a dinosaur. I know, I know, respect your elders. I do, just not running backs in fantasy football. Gore is now 34 years old and honestly looks about 50. With all that being said, durability has never been a concern over Gore’s 12-year career. However, age has got to catch up with him sometimes. That very well could be this season.

Behind him on the depth chart are veteran Robert Turbin and rookie Marlon Mack. Turbin has been a serviceable back over his career, but the name to note here is Mack. He had a highly productive three-year tenure at South Florida University, capped off by 1,187 yards and 15 touchdowns last year. The Colts offensive line has struggled the last few years, so don’t go hog-wild on Mack if he becomes the starter, but he should definitely enter the RB3/Flex discussion if Gore goes down.

Though I like Ty Montgomery’s talent, he’s still never been a full-time starting NFL running back. Green Bay converted him from wide receiver so he’s still learning the role. On the other hand, Jamall Williams knows the running back role quite well and has the talent to succeed as an NFL back.

After missing the 2015 season, Williams capped off his collegiate career at BYU rushing for 1,375 yards and 12 TD while averaging 5.9 YPC. The Packers liked his playmaking abilities and took him in the fourth round this spring. Williams has already impressed during training camp and in the pre-season and was even pushing Montgomery for starter reps in practice. If Montgomery proves he can’t handle the feature back role, expect Green Bay to turn to WIlliams rather quickly. He’d be a solid RB2 if that does happen.

[the_ad id=”384″]Let me start off by saying that I’m a HUGE believer in the abilities of Leonard Fournette. I’m trying to get him in as many leagues as possible. However, the one downfall to him is his propensity to get injured. He was limited to only seven games last year at LSU and has already been dealing with a foot injury during the preseason.

If Fournette is forced to miss any time this season, the Jaguars have a more than capable back waiting to step in. Over his six seasons with the Saints and Jets, Ivory averaged 4.6 YPC and has turned into a decent pass catcher as well over the past three years. There’s not a ton of upside here, but due to his experience and the workload he would receive as the starter if Fournette goes out, Ivory would be a low-end RB2.

For some reason, I just don’t fully trust Melvin Gordon. It could be the fact that he’s already missed five games over his first two seasons. It could also be the fact that I don’t think he’s that great of a running back. Sorry if his career 3.7 yards per attempt doesn’t inspire much confidence in me.

Oliver has his own injury demons to worry about. He missed all of last season with an Achilles tendon injury but appears to be fully healthy entering the season. You don’t draft handcuffs because of their health; you draft them because of their starter’s health. I’m simply not that confident that Gordon is a productive back for a full 16-game season. Oliver is built like a freight train and should have no issues handling a full-time workload if called upon.

Ah, New England running backs. Such a scary thing to say in fantasy. Whether you live in New England or not, you know how Bill Belichick operates. This year isn’t any different. There are a lot of bodies in this backfield, which would usually shy most fantasy owners away, but only two Patriots backs are going to be relied upon heavily as red zone and goal line backs. One is projected starter Mike Gillislee, and the other is Burkhead.

GIllislee got a late start to camp and hasn’t impressed that much on the field. If you don’t impress in New England, you don’t play. If Gillislee doesn’t start making some progress, Burkhead is going to jump over him on the depth chart and, given his size and strength, could be a touchdown scoring machine in the starter’s role. Don’t expect a lot of yards from any Patriots back, but the touchdowns should be bountiful. One of these two backs is going to score 8-12 touchdowns, and right now it looks like Burkhead might be the one. Keep an eye on this situation.

When given the chance last year, Booker didn’t do much with it. Most had him a borderline RB1 when he got the starting job midseason, but he vastly underperformed expectations. However, when you look at his overall season stats, they don’t look that bad. Booker tallied up 877 total yards and five touchdowns. That might not have been what we expected, but it’s still pretty solid for a rookie.

C.J. Anderson is currently the lead back in Denver, but he’s far from a sure thing. What is a sure thing is the mediocre batch of quarterbacks in the mile-high city. Denver is going to run the ball frequently this season making any starting running back valuable. If, more like when, Anderson coughs up the job, be ready to scoop up Booker, who has RB2 upside.

After undergoing wrist surgery in July, it’s still unsure when Booker will make his season debut, but the fact that he wasn’t put on the PUP list signals that he should be back within a few weeks. Until his return, Jamaal Charles is the handcuff here. Many might be tempted to go with Charles regardless due to his name and past success. But don’t let that fool you. His best years are firmly behind him.

It’s becoming apparent that the Chiefs are cursed at the running back position. They’ve been blessed with plenty of talented backs, but none can seem to stay on the field for an extended period of time. We haven’t played one regular season game yet this season, and that statement already holds true. Starting back Spencer Ware is scheduled to miss the entire season while recovering from a bad knee injury suffered last week. That has moved rookie Kareem Hunt into the starter’s role, and Charcandrick West once again into the handcuff role.

We’ve been here before with West. He was one of the most sought-after waiver wire additions in 2015 when the Chiefs turned to him to be their starting back. He performed admirably to with 848 combined yards and five touchdowns. If Hunt proves to not be ready for feature back work, the Chiefs shouldn’t be gun shy about turning to West. Be ready to pounce.

Add DeMarco Murray to the list of running backs that I don’t fully trust. After averaging 4.8 YPC in Dallas, that number has dropped to 4.1 in two seasons with Philadelphia and Tennessee. His 2014 season was one for the record books, but we have to forget about that now. It’s 2017, people.

Henry was a 2nd round pick last year and impressed during limited action. He averaged 4.5 YPC over 110 attempts and reached the end zone five times. That small sample size shows why Tennessee thought so highly of him coming out of Alabama. If Murray were to falter this season, Henry has back-end RB1 potential for an up-and-coming Titans team.

This one is pretty obvious. Ezekiel Elliott is one of the top three running backs in this league but has some difficulties off the field. As we speak, Elliott is currently in the appeal process to try to have his six-game suspension either overturned or reduced. While we don’t know exactly how that will play out, we do know who will be starting games for Dallas in his absence. That man is Darren McFadden.

McFadden has been a mixed bag over his nine-year NFL career but has proven to be a decent back when given the chance, averaging 4.2 yards per carries and 28 catches per season. He definitely needs to be owned given the fact that he should start at least a few games at some point this season assuming Elliott is still suspended. Don’t forget the massive Dallas offensive line he’ll be running behind, too.

This is another suspension based ranking. With Doug Martin suspended for the first three games of the season, Jacquizz Rodgers is going to have a substantial workload. In fact, if he performs well enough, it’s certainly possible that he keeps the job even after Martin comes back. If that were to happen, Rodgers would be a borderline RB1 in all formats.

Even if Rodgers does lose the job to Martin in Week 4, how confident are we that Martin will keep it for the rest of the season? For various reasons, he’s managed to play in only 71% of his team’s games over his five-year career. It’s not like he’s a superstar, either. A strong three games out of Rodgers could mean the end of the Martin era as Tampa Bay’s starting back. Rodgers needs to be owned in all formats.

Thank you for reading another edition of the Fantrax weekly top-10. I hope you can use this article to your advantage and get a leg up on your fellow league members. This is the last installment as we will be transitioning into a set NFL coverage schedule. Check back on each Friday for my weekly Quarterback report. Got a question about a player not covered here? Ask in the comments below or follow me on Twitter @EricCross04 and ask there.