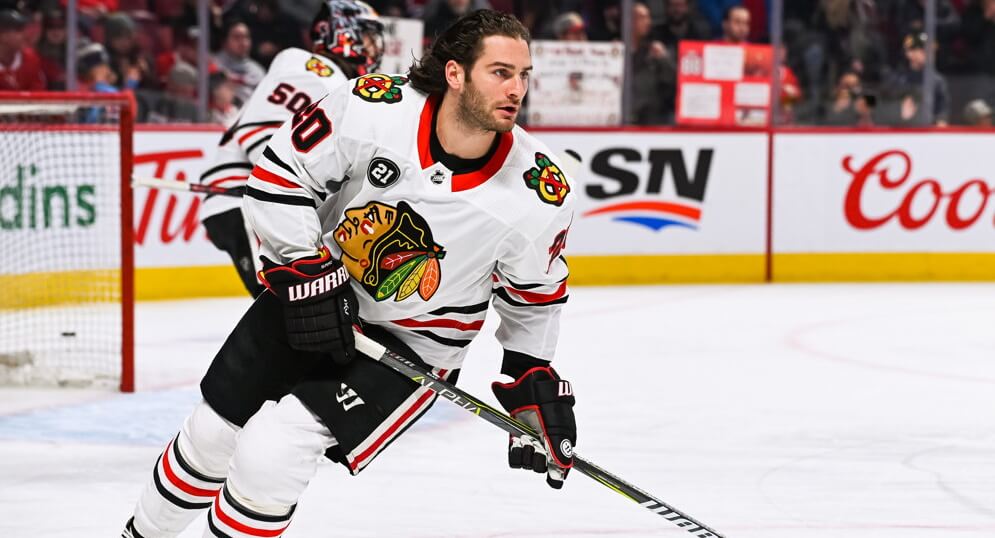 If you are in the United States, you have devoured your turkey and shopped for your gifts.  Now it is time to devour some information and shop for your streamers.  The week 9 Fantasy Hockey Planner will guide you through your lineup decisions and also steer you toward the right H2H streamers.  All streamers listed below are below 50% fantrax owned as I write.

There are nine teams with four-game schedules.  Oddly, none of them play more than half of the four at home.

Brandon Saad (LW – CHI) is the prodigal winger.  So many fantasy players had faith in him for so many years and ended up so disappointed.  Chicago once traded Artemi Panarin to get him.  Saad “rewarded” the Hawks with seasons of 35 and 47 points in his first two years.  This year Saad is playing with Jonathan Toews and the surprisingly spry Alexander Nylander.  In his last 11 games, he has had 4 goals and 5 assists.  He throws a few hits and his shooting percentage is a modest sub-10%.  While he does not play much with the man advantage, his even-strength play is encouraging enough for a stream.

Jeff Carter (C/RW LAK) is a surprising 5th in the NHL in shots this year.  He is more of a mid-40s scorer these days with about a hit, half a block, and half a PIM per game.  He is worth a stream in a 4-game week.

Blake Coleman (LW/RW – NJD) had a 2-goal, 2-assist outburst on Thanksgiving Day which will get him attention in your fantasy league.  That big game will inflate his averages a bit.  To be clear, I am not calling an offensive breakout in the making. He does already has had 6 points in 7 games prior to Thursday, though.  Coleman’s biggest asset is his 2 shots, 3 hits, and 3/4 of a block per game.  Coleman, Zajac, and Gusev scored three points on the ice together Thursday.  I would love to see Coleman get in on the long-anticipated Gusev breakout.

Ryan Reaves (RW – VGK) has been mentioned before as a player who is format-dependent.  If your league emphasizes physical peripherals he will likely be owned, if you are in a scoring-only league he will surely be a free agent.  I need to mention him for his recent stretch of 7, 9, 12, and 8 hits in a run of four games.  If you play in a points format with half a point per hit, he might be startable for that alone.

“Quality” is relative this week.  If you have a shallow bench, there will likely be blank spots in your starting lineup every night of the week.  Each day has a minimum of 9 teams off.  If you only maintain one streamer spot, you will be able to pick from among many options each night.  If you can still make adds for Monday when you are reading this, hit a streamer early and keep the churn going all week.  Coleman and Reaves are as attractive here as above because they have the Monday-Tuesday back-to-back.

Wayne Simmonds (RW – NJ) is another bet on a New Jersey resurgence.  Simmonds gets to stand in front of the net and try to deflect pucks at Buffalo Monday and home against Vegas on Tuesday.  He has a role in the power play but it has been a slog this year.  Still, Simmonds has half a point per game and deserves more according to expected goals measures.  When New Jersey broke out for six goals against Montreal on Thanksgiving, none were on the power play.  If that part of the offense can kick in, Simmonds’s physical game could be aided by a point or two at the beginning of the week.

Nick Ritchie (LW – ANA) has been racking up a lot of hits and a few shots in recent weeks. His scoring has been ice cold.  In the last few games, he seems to have stabilized on a line with Sam Steel and Ondrej Kase, probably the best-case scenario for an Anaheim forward.  I’ll hope he can sneak one by Jon Quick or Jack Campbell on Monday, then I will likely cast him aside for someone else on Tuesday.  A big game would be unusual given what Ritchie has been able to accomplish this year, but not surprising given Ritchie’s talent level.

Ilya Samsonov  (G – WSH)  is a bit of a longshot selected because there are not a lot of interesting backup options for the week.  Ilya Samsonov, who has been less frequently used in recent weeks, has probably been dropped in a shallow league.  While adding an east coast player in the middle of a west coast road trip is not a great scenario, the matchups against LA and San Jose are not unreasonable.  This is a soft recommendation if you think you need a lot of goalie help next week.  With the Capital skaters in front of him, Samsonov seems a solid candidate for a win at least.

For more Week 8 Fantasy Hockey talk be sure to tune into my weekly podcast Fantasy Hockey Life right here on FantraxHQ for more streamer suggestions, great guest interviews, analysis, and general fantasy hockey tomfoolery.  Find it wherever you download podcasts.