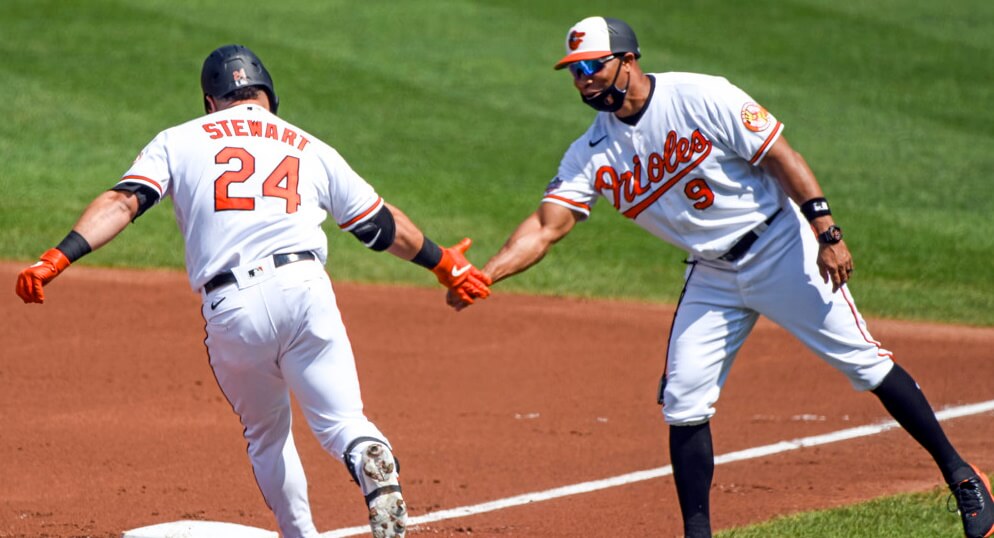 We waited a long time for baseball season, and now we’re down to the final two weeks. Minor tweaks down the stretch can help win fantasy baseball leagues, and thus we bring you the Week 8 hitter matchups. A handful of teams play 8-10 games this week, and a few teams face some of the worst pitchers. As always, check out Eric’s waiver wire article, the two-start pitcher piece by Chris, and Mick’s streaming pitcher article as you prepare for the week ahead. Let’s look at the week 8 hitter matchups.

Most of the easier Week 8 hitter matchups include teams playing more games than most this week. The Marlins arguably have the juiciest matchup facing the Phillies, Red Sox, and Nationals pitchers that rank in the bottom five in wOBA allowed. Orioles hitters play eight games at home this week, and their hitters should feast with the hitter-friendly environment. Partly an honorable mention, but the Pirates play nine games, and it’s mostly about the higher volume with at-bats. As a team, the Pirates rank dead last with a .277 wOBA on the season. The Rockies play all six games at home this week, but the Athletics and Dodgers pitchers present a tough matchup.

The Giants and Cubs play five games this week, and they are the only two teams playing less than six games. Indians and Twins pitchers rank in the top-6 in wOBA allowed, meaning Cubs hitters may struggle in the week 8 hitter matchups.

Start Them in Week 8

Over the last 14 days, D.J. Stewart is dominating with five home runs, nine runs, and seven RBI while slashing .500/.652/1.438. That OPS isn’t a typo. He’s hit a home run in five out of the last six games. In the small sample, Stewart is rocking a 50% hard-hit rate, 92.4 mph average exit velocity, and 27.8% barrel rate. Although it’s unsustainable, ride the hot hand since the Orioles hitters have one of the easier week 8 hitter matchups.

Another Orioles hitter Ryan Mountcastle has been on fire with four home runs, eight runs, and 13 RBI with a .386 batting average over the last 14 days. Although it’s a small sample, Mountcastle has a 38.8% hard-hit rate, a 10.2% barrel rate, 85.1 mph average exit velocity, and .444 wOBA. Most of the underlying metrics provide reasons for concern, but he’s still producing. Similar to Stewart, ride Mountcastle’s hot bat in the easier week 8 hitter matchups for the Orioles.

Adam Duvall smacked three home runs against the Marlins earlier this week, and that’s his second three-homer game on the season. So far, Duvall has 13 home runs, 27 runs, and 29 RBI with a .261 batting average. Braves hitters play three games each against the Orioles and Mets, and both teams pitchers rank in the bottom ten in wOBA allowed. Duvall has shown to be a sneaky source of power with a 41.8% hard-hit rate (54th percentile) and a 15.4% barrel rate (87th percentile).

The righty slugger Jesus Aguilar is on a tear in September with three doubles, two home runs, 11 runs, and five RBI while slashing .300/.417/.525. His 28% line drive rate increased from 20% last year with a similar batted ball profile to his breakout 2018 season. Aguilar’s 17.1% strikeout rate dropped almost 5% from 2019 while he also increased his contact rates across the board. Even though he currently has a below-average hard-hit rate and barrel rate, Aguilar’s expected stats look promising. His .293 xBA, .491 xSLG, and .359 xwOBA all rank in the 70th percentile and above. With one of the best week 8 hitter matchups, start Aguilar with confidence.

In the last 14 days, Garrett Cooper has three home runs, nine runs, and ten RBI with a .277 batting average. Cooper missed a ton of time in August but logged a hit in four of the last five games. It’s a small sample, but he has a 40.3% hard-hit rate, 90.7 mph average exit velocity, and a 13.3% barrel rate. Marlins hitters face several weaker pitching staffs, and Cooper should continue producing with their week 8 hitter matchups.

Veteran Miguel Rojas is hitting well in September with four doubles, three runs, two RBI, one steal, and a .333 batting average. If you need help with batting average, then start Rojas because he also chips in a few stolen bases. On the season, Rojas has a .343 batting average, which is likely driven by the .383 BABIP. However, he has a decent 22.9% line drive rate and an above-average 78.8% contact rate. Similar to Cooper, Rojas faces juicy hitter matchups this week.

In a full season, Jeimer Candelario would be on pace for career highs across the board. He currently has seven home runs, 26 runs, 28 RBI, and one steal with a .327 batting average. Before this point, he never had a batting average above .283 in any season, and he is one home run away from tying his home run total from last season, which he reached in 94 games. The .402 BABIP is out of this world, but Candelario improved his 28.7% line drive rate with above-average Statcast data.

With a 90.1% Z-Contact & 25.5% O-Swing over that span, Jeimer is honing in on pitches he likes in the zone & mashing them 💥#FantasyBaseball pic.twitter.com/mJPPObJDxp

Candelario is rocking a 45.9% hard-hit rate (80th percentile), 90.8 mph average exit velocity (76th percentile), and 11% barrel rate (73rd percentile). His expected stats rank in the 72nd percentile and above with a .303 xBA, .537 xSLG, and a .381 xwOBA. At this point, Candelario is arguably a must-start with his .400 batting in September with three home runs, ten runs, 13 RBI, and one steal. It’s a safe bet to start him even with more difficult week 8 hitter matchups.

After returning from the injured list, Dylan Moore picked up where he left off for the Mariners. In September, Moore smacked two home runs, three doubles, six runs, five RBI, and four steals. Similar to Candelario, Moore is on pace to set career highs in a full season. His Statcast page is all red across the board, and Moore is crushing the ball with a 45.2% hard-hit rate (85th percentile) and a 15.1% barrel rate (89th percentile). The Mariners play the Padres, who rank 8th, and the Athletics that rank 3rd in wOBA allowed. With the power and speed that Moore provides, he is worth starting regardless of the matchup at this point.