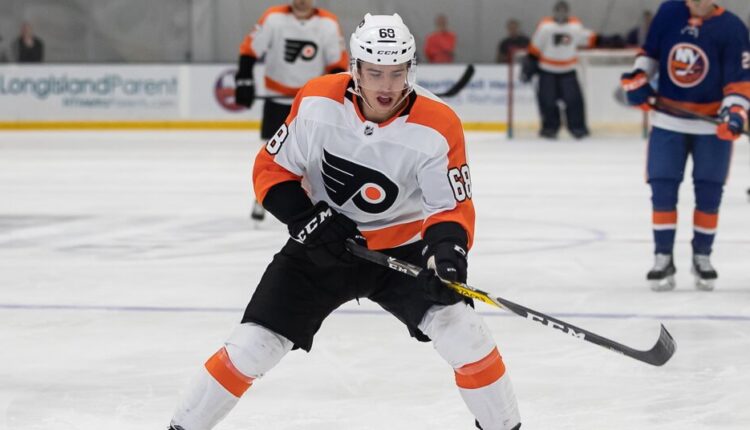 Just like for NHL clubs, every point matters in your fantasy hockey league.  Some of your league-mates may be starting to lose hope.  Whether you are 2-5 or 5-2, you can build your case for the playoffs this week by streaming hard and making good lineup picks for weekly leagues.  The Week 8 Fantasy Hockey Planner is here to help with those tough lineup decisions and also highlight some nice H2H streamers.

The majority of NHL teams have 4 game weeks in week 8. Week 8 has more NHL games overall than any week so far this season.  In weekly lineup leagues, there is no excuse not to load up with heavy schedules to pile up stats.  Only Florida has a two-game week.

Morgan Frost (C/LW – PHI) is finally breaking into the NHL two years after he was drafted in the first round.  Others should be so lucky as to play with Claude Giroux and Travis Konecny right away.  Koncecny assisted on Frost’s first career goal while Giroux assisted on his second.  Frost returned the favor for Giroux for his third point in 2 NHL games.  While he is not listed on Philly’s power play on some websites, he has definitely been playing power-play minutes.  Frost dominated for several years in the OHL and was hot at the start of the AHL season before this call, so anything is possible. Some players we grab to ride a hot streak or exploit some expected regression.  Frost, we grab to try to get in on the ground floor of something that could be big.

Brandon Tanev (LW/RW PIT) is a player I’ve owned all year in my experts’ league because of his game-changing 4 hits and 1 block per game.  This week he lucked into a 2-goal game against the Islanders.  Tanev is playing next to Jared McCann, the center who “replaced” Sidney Crosby in the Pens’ lineup.  Whether you believe in Tanev’s 13% shooting or not, his 5 goals and 6 assists on 1.5 shots per game are very respectable for a peripherals guy.  Tanev is not killing the Penguins in real life either.  His even-strength possession numbers are on the right side of 50% and he draws a ton of penalties.

Alex Killorn (LW/RW – TB) sits at 5 goals and 10 assists in 19 games this year.  3 of those goals and 6 assists have come in his past 6 games alone (albeit 3 points were in the 9-3 drubbing of the Rangers on November 14.)  Killorn is listed with a sketchy even-strength line on the major lineups sites, but what really matters for your team is his current role on Tampa’s PP1 unit.  At 44% IPP at even strength and 67% IPP on the power play, there is an opportunity for Killorn to luck into even more assists.

Radim Simek (D – SJ) is a guy guest of the podcast Victor Nuño has talked up to me in the past.  In his first 8 NHL appearances of the year, Simek has managed a goal and 3 assists to go with 11 shots, 16 blocks and 23 hits.  When targeting hits and blocks streamers, I love getting a player with a chance at a point every other game.  Playing next to Brent Burns on the Sharks’ top pairing is a nice way to pick up an occasional secondary assist.  Playing nearly 20 minutes per game will give ample opportunities to get peripherals.  Simek’s performance sample this year is tiny, but I won’t be surprised if he gets a point in at least one of the two week 8 matchups against the Kings.


Week 8 features a very unusual schedule.  Tuesday and Thursday are very light days while normal quality game nights Monday and Wednesday are busy.  This is no doubt related to US Thanksgiving on Thursday when lonely New Jersey travels to Montreal for the one game of the day.  A whopping 19 teams play a Friday-Saturday back-to-back.  The international brotherhood of backup goalies will be busy on Saturday.

Teams with three quality games are Dallas, Minnesota, and Montreal.

Tanner Pearson (LW – VAN) is on a bit of a tear.  In his last 5 games, he has potted 3 goals to go with 3 helpers.  4 of those 6 points were on special teams – 3 on the power play and 1 shorthanded goal.  On the year, he averages 3 shots, 1.5 hits, and 1 block per game.  In the last two games, he has been deployed with Pettersson and Boeser, which certainly gets my attention.  While his power-play time has been uneven, I am starting to believe this might be the year the 27-year-old surpasses his typical half-point-per-game pace.  His even-strength shooting percentage is only 5.5%, leaving a lot of potential to increase goals.

Jason Zucker (LW/RW – MIN) has mysteriously dropped below 50% owned.  An admittedly high 16.7% shooting percentage has started Zucker at 6 goals and 8 assists in 21 games.  If that pace maintained, Zucker would put up something in the mid-50s for the year.  The Wild have not been great this year, and Zucker’s 14 points trail only Eric Staal among team leaders.  The durable Zucker should be a solid top-line, top-power play guy all season.  Less than two shots per game is well under Zucker’s career pace, but his pace of a hit per game gives some sneaky peripheral value on the side.

Brendan Lemieux (LW – NYR) was last seen in a drag-out brawl with Tom Wilson.  The repeated favorite of this column put up an assist against Washington, the only game he’s played this week.  Lemieux’s formula remains the same: play even strength with Kakko, sneak onto the power play with Chytil and Buch, hit a lot of people.  I expect a point every other game with 2 shots, 2 hits and a block per night.

Mats Zuccarello (RW – MIN) has not been impressive this year.  When I dig into the stats I find nothing to convince me he has been unlucky.  He was hurt for a stretch early in the season and is fitting into a third team in less than a year.  If you get the Zuc from the first 18 games you will not be pleased streaming him.  On the other hand, I have been watching for signs of life all year.  We are starting to see them.  Zuccarello had points in his last two games and on both nights bested the highest number of shots on goal and minutes on the power play of any of his first 16 games.  He plays at even strength and the power play with the best linemates Minnesota offers — Staal and Zucker.

For goalies, we typically focus on back-to-backs because they give the opportunity to pick up a competent backup goalie on the back half of a back-to-back.  It helps when the second game of the back-to-back is a quality game night. There are a lot of back-to-backs next week, most of them on Friday-Saturday night.  In fact, 19 of the 26 teams playing on Saturday night will have already played on Friday.  This is important because in a lot of cases while you might own starters with a game on their schedule for Saturday, it seems likely many will be rested on Saturday night.  Long story short, the field is quite wide open for streaming backups in week 8.  My recommendation is someone who might be a backup or might be in the first position by next week.

Juuse Saros  (G – NSH)  Nashville plays four games next week against teams higher than them in the standings.  They have allowed the 7th most goals in hockey while their games feature the second-most goals scored for the two teams combined.  On the other hand, the Preds have allowed the second-fewest shots against in the NHL.  While three lousy games from Saros at the beginning of the year hurt, Saros has had 4 straight quality starts since.  Pekka Rinne has been the opposite.  In 6 games since Halloween, Rinne has had 5 disasters, getting pulled in 3 of those.  This year, Rinne leads the NHL in starts with a below-.850 save percentage with 6.  With Nashville’s season slipping away, it may be time for Rinne to take a rest.  Saros would have an outside shot at a 3-game week if so.

For more Week 8 Fantasy Hockey talk be sure to tune into my weekly podcast Fantasy Hockey Life right here on FantraxHQ for more streamer suggestions, great guest interviews, analysis, and general fantasy hockey tomfoolery.  Find it wherever you download podcasts.