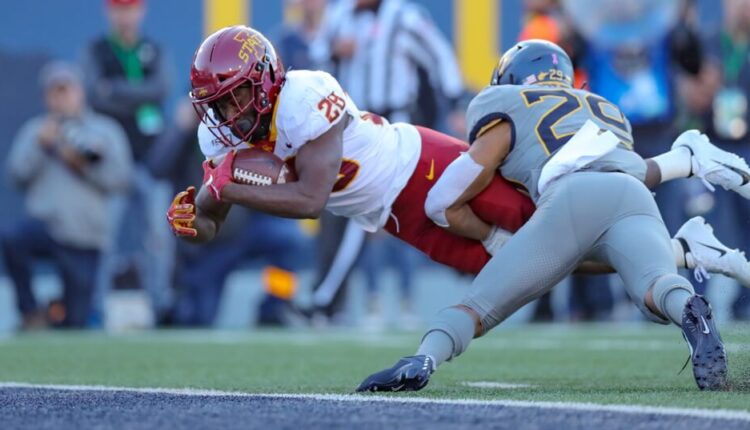 I am not a Tar Heels fan, but I have watched many of their games this season. After last season’s 2-9 record at Chapel Hill, I have been captivated with Coach Mack Brown’s turnaround of the program. The Tar Heels are only 3-4; nonetheless, the team is playing much better.

One of the keys to the about-face has been freshman quarterback Sam Howell. Against Virginia Tech on Saturday, he tossed five touchdowns, which equaled a single-game mark at North Carolina. Howell has now been named ACC Quarterback of the week three times.

With 20 touchdowns, Howell has established a freshman school record. “So impressed with Sam, especially on third and long and fourth and long. He doesn’t seem to know what down it is, he just goes and plays. We have a great future ahead with him. He has a tremendous amount of confidence, and also, he’s a gym rat, so he studies and knows exactly what things are there…” Coach Brown said two weeks ago on 247sports.com by Sam Marsdale.

Coming out of high school, Howell was a consensus four-star recruit, who was the No. 2 pro-style quarterback in North Carolina and No. 3 in the country. He concluded his career with 13,415 yards passing and 145 touchdowns. He also rushed for 3,621 yards and scored 60 times. At 6-foot-2 and 225 pounds, Howell owns a big arm and throws well on the run.

He opened the campaign behind center for the Tar Heels and has improved throughout the crusade. He has passed for over 300 yards in three of the last four games and totaled 1,893 yards on the season. Over the next two weeks, North Carolina hosts Duke and Virginia, and Howell will surely continue to impress. — John

When Kent State hired Sean Lewis away from Syracuse and landed Auburn-transfer Woody Barrett, it appeared that Barrett was on the verge of fantasy stardom similar to that of Eric Dungey, whom Lewis made a stud in the seasons prior. Barrett has since been benched in favor of junior quarterback Dustin Crum, who appears to have broken out last week against Ohio with four passing touchdowns and 96 yards on the ground.

Crum has 10 touchdown passes and zero interceptions this season and leads the Golden Flashes in rushing yards with 310. The Flashes have Miami OH, Toledo, Buffalo, Ball State, and Eastern Michigan left on the schedule and all of those matchups spell great games with prodigious offensive showings for both teams. — Justin

Ignoring the incredible Illinois victory over Wisconsin, identify the biggest upset of the weekend:

Identifying Breece Hall as the key pickup of this week’s college fantasy football waiver wire might be the easiest advice that I provide all season. How can Hall not be owned on over 90% of rosters by the end of the waiver wire process? He might be the checkmate move required to win fantasy championships.

Over the past two weeks, the freshman has scored more fantasy points than all ball carriers other than Kenneth Gainwell. He has totaled over 70 fantasy points with 315 yards rushing, four catches for 78 yards and five touchdowns.

When researching for my DFS lineup on Saturday morning, I identified Breece as an undervalued asset and placed him in my cash game lineups…he did not disappoint. The Cyclones’ game-breaker rushed for 183 yards on 18 carries and scored twice. “Whenever Breece touches the ball, especially when everyone’s blocking and makes blocks, he can do amazing things. To be able to stiff-arm a guy and stay in bounds and take off like that is special,” quarterback Brock Purdy proclaimed after the victory over Texas Tech on desmoinesregister.com by Tommy Birch.

Iowa State has sought a replacement for David Montgomery all season and finally, found its man in Breece. It is a no-brainer to procure the rising CFF star this week. — John

Texas Tech running backs have been one of the most untrustworthy fantasy positions in all of football for a while given that they usually rotate three or four and most owners play the wrong one. Not anymore though. Matt Wells made Darwin Thompson a stud last year, and it now appears that SaRodorick Thompson has taken over the lead spot in the backfield with double-digit carries over the last four games.

Thompson’s recent resume includes 210 yards and four touchdowns with 10 receptions for 30 yards. Thompson is the back that Wells will run for years to come, and with a more consistent workload, he seems to be a safe bet to start moving forward. Especially this week against Kansas who allowed 192 rushing yards to Keontay Ingram and Sam Ehlinger last week. — Justin

Miami of Ohio hasn’t looked paramount after losing most of their offense to the transfer portal over the offseason. It actually wasn’t until recently that the RedHawks found an identity in their offense, and the gatekeeper is running back Jaylon Bester.

Bester has gone three consecutive weeks with scores on the ground and has been heavily targeted in the receiving game as well with nine receptions. Although he hasn’t topped 100 yards since doing so three weeks ago, he managed to score twice last weekend against Northern Illinois to cap off his third straight 15-plus, fantasy-point game. — Justin

As the playoffs are just around the corner, running backs are always in demand on the waiver wire. Identify the most interesting ball carrier to acquire this week:

“History tells us that once Iowa State has a bell-cow back, they want to ride him. Now that Breece Hall has emerged for the Cyclones, what a great time to snatch him up and ride him into the playoffs.” @JustinNottingh6

Tucker is prototypical in size at 6-foot-2, 190 pounds but that hasn’t stopped him from amassing 200 yards on 14 receptions with a score over the last two weeks. Tucker’s fantasy point totals in the last two weeks are 19 and 20 and that won’t change on Saturday against Akron that has virtually no positives on either side of the football. — Justin

Back in early September, I introduced readers to Ball State quarterback Drew Plitt, who now ranks 27th among CFF signal-callers. The Cardinals are 3-0 in conference play (4-3 overall) and in first place in the MAC West Division. When I analyzed Plitt’s playmakers, I focused on RB Caleb Huntley and WR Riley Miller.

Regrettably, I did not focus on Justin Hall. Very quietly, the junior wideout has risen up the CFF rankings over the past two weeks, scoring over 45 fantasy points. He is now the 36th most productive receiver in college fantasy football with 40 receptions for 423 yards and three touchdowns.

At 5-foot-9 and 181 pounds, Hall has dominated opponents over the Cardinals’ past four games, notching 23.5, 22.6, 2.8 and 19.5 points. Other than the dud showing against Northern Illinois, Hall has deserved a spot in starting lineups for fantasy fanatics. In the last month, he has outproduced many well-known players: Cedric Byrd, II, Tyler Johnson, Tylan Wallace and Marquez Stevenson to name a few. I am targeting Hall on many of my teams this week as Ball State hosts Ohio and travels to Western Michigan in the next two weeks. — John

Kendall Hinton’s playmaking ability was one I was looking forward to at the quarterback position, but the rise of John Wolford and Sam Hartman derailed any chance of that ever happening. This didn’t stop Hinton, however. After mulling over the idea of transferring, Hinton decided to switch to receiver. A move that has benefited his career heavily.

Hinton began the season with nine receptions for 66 yards and a score, which was a team-high in receptions before he fell injured against Rice in week two. After coming back against Boston College, Hinton has caught 20 passes for 227 yards against Louisville and Florida State. Hopefully, Newman can come back and get this man a touchdown. — Justin

Justin and I do not usually highlight tight ends, but every once in awhile, exceptions are made. With the season-ending injury to Jacob Breeland, Spencer Webb stepped into the vacant spot and took advantage of the opportunity versus Washington, catching two passes for 31 yards and a touchdown.

A four-star prospect from California, Webb was a top ten tight end by ESPN, Rivals and 247Sports. He finished high school with 23 touchdowns on only 61 receptions for 1,063 yards, averaging 17.4 yards per catch.

At 6-foot-6 and 246 pounds, the redshirt freshman had moved to wide receiver for the Ducks but was asked to play tight end again. “Coach [Jovon Boughknight] has helped me with technique. A lot of it is technique in college and making sure you’re technically sound. When you’re running routes at tight end, you’re going to have like a backer or a bigger guy on you, you need to use your technique and size against. It’s helped a lot,” he said on 247Sports.com by Erik Skopil. QB Justin Herbert spreads the ball around in the passing game and often targeted Breeland. If you need assistance at the position, Webb can provide relief as the playoffs near in college fantasy football. — John

As I sit down to compose my final Gemstones profile, I just finished watching two classes of sophomores making oral presentations on Civil Rights heroes in American History to complete our unit on Social Justice.

I am so lucky to inspire my scholars with the biographies and stories of Eleanor Roosevelt, Josephine Baker, Cesar Chavez, Thurgood Marshall, Josephine Baker, etc. I always tell my students to demand, and fight, for their Constitutional Rights.

TJ Simmons’ father inspired his son to succeed on the field and in life. “My dad always told me growing up big players make big plays in big games. So whenever the pressure is on I try to step up and make those plays, and be a guy who is always doing what he is supposed to be doing and lifting the team up,” Simmons stated after the loss against Oklahoma on bluegoldnews.com.

If you examine Simmons season totals (31 catches for 409 yards and four touchdowns), he might not appear to be a CFF asset. Nonetheless, it is important to scrutinize his production profile in more detail.

Over the past three weeks, the redshirt junior ranks fourth among CFF receivers with 18 receptions for 284 yards and four touchdowns. Simmons, 6-foot-2 and 199 pounds, leads the team in yards and touchdowns among the wide receivers and has become the alpha dog in the passing game. After the bye week, the Mountaineers play Baylor and Texas Tech and both games will produce plenty of points. — John

It is the year of the Freshman across the nation. Identify the most impressive first-year difference maker:

“How is anyone not voting for Kenneth Gainwell? He is sixth in the nation in rushing yards per game, has the best yards per attempt of any player with 100 rushes, and has the most receiving yards by a running back by more than 100 over second place.” @FBSFantasyFoot

“Memphis RB K. Gainwell: What a game this kid had last night with 300 yards of offense, three touchdowns and nine receptions, incredible.” @JustinNottingh6

Got some more names for the Week 8 College Fantasy Football Waiver Wire? Let John and Justin hear about it in the comments below. 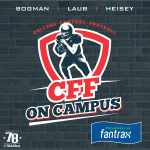