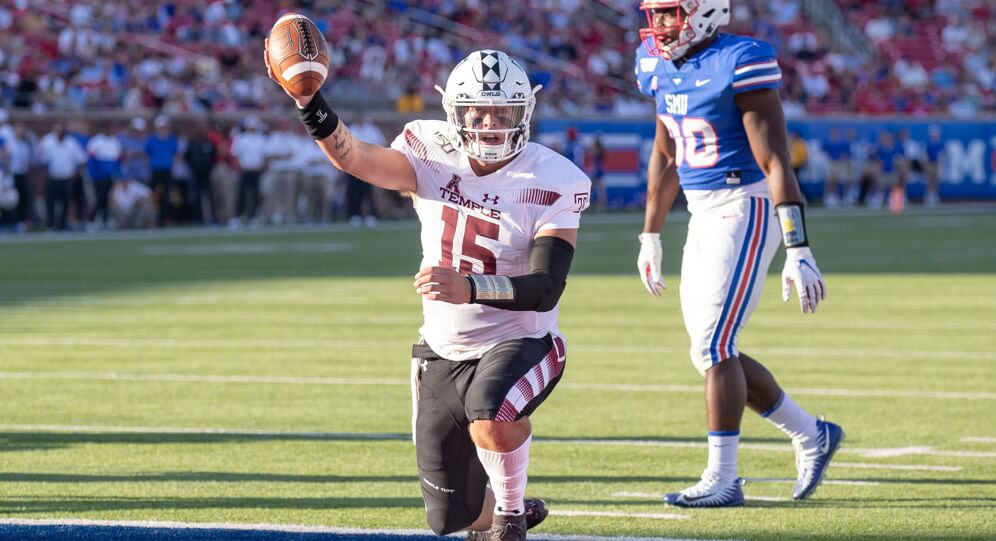 It is finally time for the Big Ten to kickoff. The Mountain West also opens its season. I can feel the excitement and electricity in the air with a full Saturday slate ahead. On the East Coast, hopefully, we get an after-dark game (Air Force-San Jose State) to conclude the day. If you love college fantasy football like me, you are scrutinizing the depth charts for hidden nuggets in both conferences. I pinpoint the best college fantasy football sleepers to attain and insert into lineups for Week 8.

Sherlock Holmes famously stated, “when you have eliminated all which is impossible, then whatever remains, however improbable, must be the truth.” Researching quarterback matchups this week reminded me of Holmes’ quote. I kept looking and searching all day Wednesday. Finally, the most obvious matchup provided my answer.

Troy hosts Georgia State in one of the highest-scoring projected contests, and I continually focused on Panthers’ quarterback Cornelious Brown, IV. I missed the sleeper on the other side of the gridiron…no longer.

Over the past two weeks, Gunnar Watson has been one of the most productive CFF quarterbacks. He has tossed seven aerial strikes and passed for 671 yards. Troy won both games and scored 68 points. After the victory over Texas State, he earned the Sun Belt Conference Player of the Week.

At 6’3” and 208-pounds, the Trojans’ triggerman is a confident and poised leader despite limited action during his first two seasons on campus. “The more I play the more comfortable I get. I thought our offensive line did a heck of a job of protecting. They brought a little pressure, but I felt like I had plenty of time today to sit back there and go through my progressions,” Watson proclaimed after the victory over Texas State (troymessenger.com).

There are so many great games this weekend, and one that I will focus on is the Sun Belt contest in Troy, Alabama. Both quarterbacks are dynamic, and should easily combine for seven total touchdowns. Grab Gunner now.

Last week, I promoted Anthony Russo as a last-second replacement at quarterback against South Florida. I started the Owls’ signal-caller on two teams, and he provided a nice stat line, completing 30 of 42 passes for 270 yards and four touchdowns with two interceptions. He produced over 24 fantasy points and finished as the seventieth-scoring CFF quarterback.

Temple fell behind by eleven points late in the third quarter. Nevertheless, the senior field general guided the Owls to a dramatic two-point victory over the Bulls. On Tuesday, the Johnny Unitas Golden Arm Educational Foundation added Russo to the 2020 Golden Arm Award Watch list.

In two games, Russo has completed 70.8% of his throws, logged a 5:3 TD:INT ratio, passed for 476 yards and rushed for 33 yards while scoring twice. Only the three interceptions are a concern for CFF owners, but all of the other numbers illuminate future success in 2020.

Russo and the Owls travel west to take on Memphis this week. Las Vegas projects over 70 total points with Temple scoring four touchdowns. Very few CFF managers took my advice last week and Russo is still wildly available in CFF leagues. He provides a great option as a starter this week against the Tigers.

In 2-QB leagues, identifying a quarterback in the free agent pool is always a challenge: Who Ya Got in Week 8 on the waiver wire?

“Pick a sleeper…any sleeper! I am a Russo man.” @aceholesrule

“If you can still grab Virginia Tech QB Hendon Hooker off the wire, he has a nice matchup vs. Wake Forest this weekend.” @JustinNottingh6

After the firemen left our house last Saturday night, I finally sat down to watch the evening games. I turned on the North Carolina-Florida State contest while looking forward to scouting the Tar Heels’ aerial assault. To my surprise, the Seminoles led 24-0 behind freshman QB Jordan Travis.

Inserting Travis into the starting lineup illuminates only half of Florida State’s recent success under first-year coach Mike Norvell, who previously led the Memphis program. The offense has been aided by a more productive running game with La’Damian Webb earning more touches.

Over the past two games, the JUCO transfer has carried the pigskin 25 times for 168 yards and a touchdown. Webb has out-touched teammate Jashaun Corbin, former Texas A&M runner, 25 to 9 and outgained him 168 to 36. I always follow touches and production; Webb is now the guy in Tallahassee.

More importantly, coach Norvell appreciates the sophomore game breaker. “I think La’Damian’s come in and done an extraordinary job…he’s had a lot of big runs, been very productive with the ball in his hands. But probably my favorite thing to do is watch No. 8 (Webb) when he doesn’t have the ball in his hands when he’s asked to protect, whether it’s being a lead blocker or just whatever. In all aspects of his game, he’s a true competitor,” coach Norvell affirmed (tallahassee.com).

Both Cam’Ron Harris, Miami (134), and Kyren Williams, Notre Dame (127) surpassed the 100-yard barrier against the Cardinals, and Louisville ranks in the middle of the pack defensively against the run. Webb is largely ignored by the CFF community, and sharp managers will acquire the Seminoles’ running back ASAP.

I always tell new educators that the key to classroom success is the ability to listen to your students. Far too many teachers want to talk instead. I apply the same philosophy to fantasy football: I listen to intelligent people.

My CFF: On Campus teammate Eric Froton named Jordan Byrd among his Fantastic Four sleepers on our last show. Afterward, I immediately researched the Aztecs’ running back, who had been listed among the co-starters earlier this week.

Over the past decade, Ronnie Hillman, Donnel Pumphrey, and Rashaad Penny all became CFF luminaries on the San Diego State campus. Nonetheless, the Aztecs tweaked their offensive scheme in the offseason to implement a more wide-open attack. The fullback has been eliminated, and the smash-mouth approached replaced.

Now, Byrd has the opportunity to take the reins of the backfield for new coach Brady Hoke. In 2018, Byrd was named the SDSU Co-outstanding Freshman Award, playing in 11 games and scoring a 72-yard touchdown. Last year, he started six games at running back and returned kicks on special teams. He gained 355 yards on 78 carries and scored three touchdowns and added 16 catches for 64 yards.

Byrd is listed among three runners with the dreaded or designation on the depth chart. At 5’9” and 170-pounds, the junior speedster owns a skill set that should thrive in the new offense. He has been named to the Paul Hornung Award Watch list as one of the elite versatile players in the nation. Seize Byrd before your league mates learn about the Aztec’s game-breaker.

There are still quality running backs on the waiver wire in CFF leagues: Who Ya Got in Week 8?

“Kevin Harris has been $$$ and a huge surprise for the Gamecocks this year.” @JustinNottingh6

Anyone who has followed me over the past six years on Twitter knows that I am a diehard UConn season-ticket holder. Unfortunately, the Huskies are not playing this season, and I needed to find a new team to follow. In 2020, it is the Cougars.

BYU has been featured three times as stand-alone games on TV in the northeast, and I picked up QB Zach Wilson early in the season on three CFF teams.

Quietly, the Cougars employ one of the more dynamic pass-catching duos in the country with Gunner Romney and Dax Milne. BYU averages 541 yards and 43.6 points per game, and Milne is on pace to produce a record-breaking campaign on campus among receivers.

Last Friday against Houston, Milne snatched nine passes for 184 yards and three touchdowns. “That dude (Milne) is a playmaker. He’s one of my best friends. I’m so happy for him and what he’s gone through in his life with ups and downs where no one really thinks you can do it. I’ve believed in that guy since day one. I’ve always known he was going to be a big-time player,” Wilson proclaimed after the game (deseret.com).

A walk on, Milne is an outstanding athlete, who runs great routes, and uses tremendous hands to corral the ball in flight. The Cougars’ home run hitter must be acquired on all CFF rosters and inserted into lineups this week.

Over the last decade, one of my memorable West Virginia pickups is receiver Kevin White in 2014. The former Mountaineer dominated opponents, and the Big 12, before being a first-round selection in the 2015 NFL Draft. Also, both Gary Jennings and David Sills produced exceptional fantasy numbers on the West Virginia campus in 2017-18.

In 2020, the Mountaineers are 2-1 after three games and the offense is scoring over 30 points per game. While watching running back Leddie Brown bludgeon Kansas, I noticed wide receiver Bryce Ford-Wheaton, who corralled five passes for 89 yards and a touchdown. In the past two games, the redshirt sophomore has eight receptions for 117 yards and two touchdowns on 15 targets.

“[Ford-Wheaton] has got talent. He’s got the size and the speed and he’s just got to put it together. I knew he was going to be a really good player here, I just didn’t know exactly when it was going to happen,” coach Neal Brown indicated as camp came to an end in August. (wvsportsnow.com).

At 6’3” and 218-pounds, Ford-Wheaton earned three-stars as a prospect out of high school and was ranked as the No. 27 best prospect in North Carolina by 247Sports in 2017. Wheaton provides a nice under-the-radar waiver wire pickup if a CFF manager needs a starter tomorrow.

Do you need an emergency starter at WR (or Flex): Who Ya Got in Week 8?

“Heiligh! 15 catches and 200 yards the past two weeks for a nice offense and soft schedule?!?!?  Sign me up.” @aceholesrule