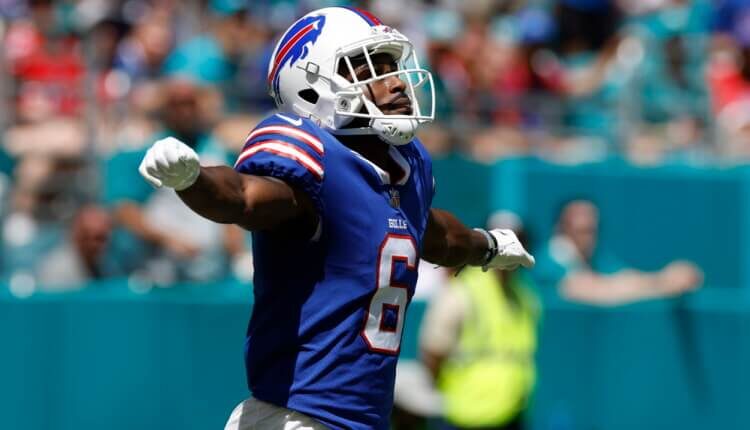 When identifying potential sleepers, snap count and target share is the name of the game. The difference between a player being a sleeper or just some bench piece is a very fine line. It is all about how productive a player can be with the limited looks that they receive. It is also important to consider their matchup and their team’s offensive scheme. The conclusion of Week 5 has left us with some more useful data points. Based on that, here are four Week 6 Sleepers who could pay off big for your fantasy football squads.

Week 5 would have been a great time for McKenzie to pad his stats. The Bills absolutely destroyed the Steelers in this one. The Steeler’s secondary couldn’t cover a baseball diamond with a tarp. Gabe Davis went for 171 yards and 2 TDs, Diggs went for 102 and 1 TD, and McKenzie’s replacement in the slot, Khalil Shakir turned in 75 yards and a TD. Before a concussion sidelined McKenzie, the breakout Week 6 sleepers candidate had been enjoying steady targets (12 in the last 2 weeks) from Josh Allen.

In addition to receiving these targets, McKenzie has been productive with them. In the four games he has played so far, McKenzie has scored three touchdowns. Although his replacement did a great job, I believe that McKenzie had done enough in his first four games to secure his role on the team. The Bills get the Chiefs this week. A team that just played last night, so they’re coming off a short week. Doesn’t help either that the secondary isn’t very good. This has all of the makings to be another shootout-type game. You can start Isaiah with confidence.

The Denver Broncos snagged Murray from the New Orleans Saints practice squad and played Thursday night’s game with him on the inactive list. I don’t believe that Murray was ever going to play anyway. A Thursday night game would have been a pretty quick turnaround, even for an experienced veteran. Not to mention what kind of message that would have sent to the rest of the RBs on the roster. Probably not the best for team morale. The way that the Broncos are playing, they can’t afford to have any issues off the field.

Yesterday Latavius Murray was scoring touchdown for the Saints.

The Broncos have been relying mostly on their defense to keep them in games. It would be wise of the coaching staff to run the ball more to keep their defense off the field and resting longer. If there’s any question of whether or not Murray still has any juice, he answered those in his cameo with the Saints in Week 4. Against the Vikings, Murray toted the rock 11 times for 57 yards and a touchdown on the ground. He also added one catch for 8 yards. Murray is one of the riskier Week 6 sleepers as he hasn’t taken a snap for his new team yet and there’s no telling what his role will be. Neither Melvin Gordon nor Mike Boone did much with their carries last week, so that early down role seems to be up for grabs.

The Arizona Cardinals running back room was decimated in last week’s game against the Eagles. The team started the game with a healthy James Conner, Eno Benjamin, Darrell Williams, and Jonathan Ward. When the final whistle was blown, the team was down to just Benjamin. In fact, the only other healthy running back on the roster is rookie Keaontay Ingram, who has yet to make his debut after a productive preseason. Even Eno Benjamin had to tough out the rest of the game. The third-year running back was reportedly dealing with cramps the entire second half.

If James Conner is out, then this Week 6 sleepers pick become an absolute slam dunk. The team trusts Eno enough to give him carries between the tackles and in the red zone. He’s also a very capable pass catcher. So as long as Benjamin is able to stay on the field, he’ll get all that he can handle. Against a Seahawks run defense that refuses to tackle, Benjamin should add a good chunk to his season total this week.

Thanks to a high ankle sprain, the Baker Mayfield experience (sounds like a crappy band name) may very well be over. Thank God for that. Baker Mayfield has been flat-out awful. And not the kind of awful that is still good for fantasy, he was the kind of bad that makes the glorious game of football hard to watch. Enter PJ Walker. Replacing Baker late in the fourth quarter, Walker completed five of six pass attempts for 60 yards. He only got that one drive and was not able to put any points on the board before time expired.

PJ Walker has started two games for the #Panthers, who won them both. There was a chance that a QB change was coming regardless; Mayfield's injury makes it an easy call as they move forward with Steve Wilks as interim coach. https://t.co/HZFgOcRvcD

Unlike Mayfield, Walker is not afraid to air the ball out. In fact in the XFL Walker was known for his big-play ability. That ability has not yet translated to the NFL yet, but Walker gets his chance this week with a start against the Los Angeles Rams. A tough matchup on paper, the Rams have actually been very friendly to fantasy quarterbacks. Obviously, Aaron Donald can wreck any football game, but it helps that Walker has great mobility. Walker is the deepest of the Week 6 sleepers, he’ll need to show off his legs and big arm if he’s going to prove my prediction correct.

Be on the lookout for our Week 6 Rankings which are released on Wednesday mornings: QB | RB | WR | TE | Flex Rankings

2023 Fantasy Baseball: Projecting The First Round