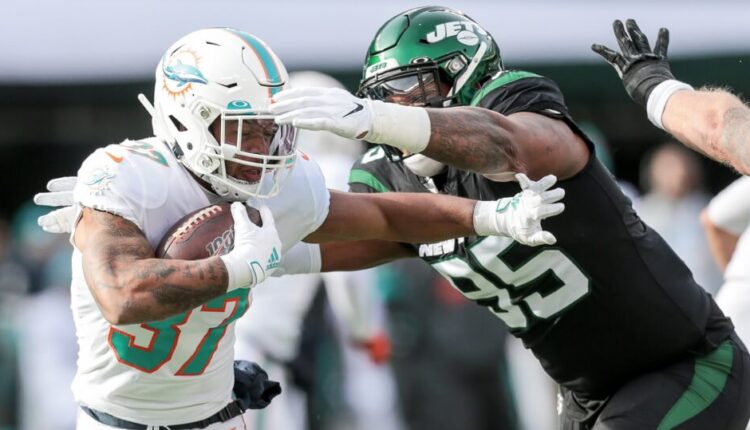 Week 6 is the first week of the 2021 season in which fantasy managers will have to navigate those pesky bye weeks. We will not see all 32 NFL teams in action again until Week 15. On top of that, fantasy managers are dealing with a seemingly neverending list of injuries. With so many variables in play, there is plenty to get into as we prepare for the week ahead. So let’s get right to it. Below are my Week 6 Flex rankings based on half-PPR scoring. These will change a bit as we gather better information as the week progresses, so keep on top of the latest news before locking in those lineups. I also added some notes on players at each position that you may be considering for your Flex spots.

Last week was another which featured some wacky production from some rather unlikely sources. Myles Gaskin authored my least favorite breakout performance of Week 5. I was fortunate enough to avoid facing him in any of my head-to-head leagues, so that was nice. On the flip side, however, I did offer this piece of sage advice to one of my best friends on Sunday morning:

Perine did post an overall RB17 performance in half-PPR leagues, so at least my recommendation was not completely disastrous. But Gaskin went ballistic on his way to a top-four weekly finish. Gaskin parlayed 10 targets into 10 catches for 74 yards and a pair of touchdown receptions in Miami’s loss to Tampa Bay. He appears, for now, to have regained control of Miami’s backfield. That is good news ahead of a meeting with the Jacksonville Jaguars. Jacksonville has allowed a league-high eight rushing touchdowns to opposing running backs. It may feel a bit counterintuitive to start a running back who has seen just 17 total opportunities (carries plus targets) over his last two games. But Gaskin should hopefully remain in the good graces of fantasy managers after this game.

Christian McCaffrey is 50-50 to play in Week 6, according to head coach Matt Rhule. This could be a situation akin to what we saw last week with Joe Mixon. The Bengals back saw a much-reduced workload on Sunday as he battled through an ankle injury. Mixon was fortunate to save his fantasy day with a late touchdown, but the opportunities (11) were way down from his normal volume. If McCaffrey is a-go on gameday, you have to start him. I do not think he will have the same workload he had during the first two weeks of the season, but he is still an easy RB1. McCaffrey should receive somewhere in the neighborhood of 20 touches assuming he is given the green light.

Saquon Barkley was carted off with an ankle injury after stepping on the foot of Jourdan Lewis on Sunday. Talk about your tough luck. It looks as though he avoided serious injury, but I would not expect to see him this week. Devontae Booker should get the bulk of backfield looks for New York, which puts him on the Flex radar this week. The Rams’ defense is in the middle of the pack in terms of fantasy points allowed to opposing running backs. Quarterback Daniel Jones is on track to play after suffering a scary-looking concussion last week. If Jones were to sit, Booker would see more touches but reduced efficiency, as Los Angeles would likely key in on stopping the run.

Clyde Edwards-Helaire will not be joining the Week 6 festivities after he sprained an MCL in Sunday night’s loss. The Chiefs placed the second-year running back on injured reserve. This injury will be tricky for fantasy managers to navigate. Edwards-Helaire is expected to be out a few weeks, and the Chiefs have a Week 12 bye. Kansas City may very well keep CEH on ice until then. They only have two games within the conference and one within the division before their bye. I would expect them to exercise caution with their young running back and save him for the latter part of their schedule. Besides, it’s not like he can help with their defensive woes. Darrel Williams was this week’s most popular add, and he will be Flex-worthy barring any other personnel moves.

Dalvin Cook and Chris Carson both sat out last week’s games for their respective teams. Both running backs are expected to return this week, though Carson did not participate in Wednesday’s practice. Cook’s return should push Alexander Mattison into a reduced role. However, I would not be surprised if Minnesota uses a more even split between their two backs than normal. I have Mattison right on the border of Flex consideration this week. Carson will also face a difficult Week 6 test against the Pittsburgh Steelers. I view Carson as more of a question mark this week than Cook. As of right now, I have him outside the range of recommended Flex plays. That may change if we get some good news on the health front, but he would still be a risky RB2 for me.

The breakout performer of Week 5 was Kadarius Toney of the New York Giants. Toney had a solid showing in Week 4 against New Orleans, catching six passes for 78 yards. But last week, he took it to another level. The Giants’ rookie receiver grabbed 10 balls for 189 yards in Dallas. He is now the overall WR9 over the last two weeks despite not scoring a touchdown. Before we dub Toney the next big thing, there are a couple of things we should consider. First, last week was a bit of a perfect storm for his production. Besides Barkley suffering an early injury, Kenny Golladay also left Sunday’s game prematurely after hyperextending his knee. The Giants trailed Dallas by a considerable margin for most of the second half. This led to a pass-happy game script as the game wore on, and Toney was the primary beneficiary.

While Golladay is out for Week 6, Sterling Shepard and Darius Slayton are expected to return after missing the last two games. Yes, the same two games where Toney thrived. Toney is also dealing with a mild ankle injury that he suffered in the loss. Add in a difficult matchup against the Rams and their vaunted secondary, and there are causes for concern. The Rams did place standout corner, Darious Williams, on injured reserve this week. But Jalen Ramsey still looms, and there are questions about where Toney sits in the wide receiver hierarchy with Shepard and Slayton back in the fold. I do not mind a speculative add (Toney is still available in over 30 percent of Fantrax leagues), and he may be a Flex consideration depending on your other options. I have Kadarius Toney as a highly volatile WR4 in 12-team leagues this week.

The Arizona Cardinals have four wide receivers who have scored at least 46 fantasy points (half-PPR scoring) through five weeks. All rank inside the top-45 based on year-to-date scoring in half-PPR scoring. The issue has been their wild swings in production. To say consistently has been lacking from the quartet would be an understatement. Below are the weekly finishes among wide receivers for each of the four Arizona wideouts.

Even perennial WR1 DeAndre Hopkins has not been immune to wild fluctuations in his weekly production. Having said that, he is still far and away the most trustworthy option each week. The floor for the remaining trio may be raised a bit in the wake of the recent injury to tight end Maxx Williams. Williams will miss the remainder of the 2021 season after suffering a serious knee injury. Williams had a healthy 14.7 percent target share over three weeks beginning in Week 2. His absence may mean more four-receiver sets for Arizona in Kliff Kingsbury’s Air Raid offense.

I don’t normally buy into snap rate as much as some do, but it would stand to reason that Rondale Moore could be the biggest beneficiary of Williams’ absence. The rookie has only been on the field for 39.6 percent of Arizona’s offensive snaps. Meanwhile, the remaining trio of receivers have all been on the field for at least 60 percent of offensive plays. Cleveland’s secondary has graded out pretty well thus far this season, led by third-year cornerback Greedy Williams. But we also saw them allow 47 points (including four fourth-quarter touchdowns) in last week’s defeat. I think it is worth chasing a potential uptick in opportunity with Moore, and I would not be opposed to starting any of Christian Kirk, A.J. Green, or Moore in the Flex spot this week depending on your roster construction.

Four tight ends had at least 100 receiving yards and a touchdown last week. None of the four were named Travis Kelce or Darren Waller. Mark Andrews and Kyle Pitts showed why fantasy managers should never bench them, and Dawson Knox continued his breakout season. I am still not buying Knox (or Dalton Schultz for that matter) as a top-five option going forward. And I never advocate for starting a tight end in the Flex spot with all other things remaining equal. However, I can see a scenario where you could have conceivably paired Knox or Schultz with an elite tight end on draft day. I still consider both riskier than their year-to-date production would suggest going forward, but I can understand the desire to ride the hot hands. I have them both as top-seven tight ends this week.

David Njoku totaled five targets, four receptions, and 35 scoreless yards in a three-game span from Week 2 through Week 4. Then last week he erupted for a monster 7-149-1 line in last week’s shootout in Los Angeles. Cleveland does run a ton of two-tight end sets. They have used multiple tight ends on over 70 percent of their offensive snaps. However, this feels like a one-off despite Njoku’s renowned physical gifts. The Browns are still very much a run-first offense, and they will have to continue to get Odell Beckham more involved in the passing game. Jarvis Landry should also be returning to the lineup by the end of the month. Pat yourself on the back if you had Njoku in your lineup last week, but don’t go chasing last week’s points unless you are in a tight end premium league.

I did list Dallas Goedert towards the bottom of my Week 6 Flex rankings, but that is wishful thinking more than anything else. Goedert landed on the reserve/Covid list on Tuesday. If Philadelphia was playing this weekend, I could see him active this week. But considering the Eagles play on Thursday, he will most likely have to miss this contest. It is too bad, because the matchup is pristine against the Tampa Bay Buccaneers. The Bucs have allowed an 81.8 percent catch rate and three touchdowns to opposing tight ends through five games. This game also features one of the highest implied totals of the week, with the Eagles expected to play from behind. Zach Ertz is a solid streaming option this week for those looking to fill a void left by an injury or a tight end on a bye this week.