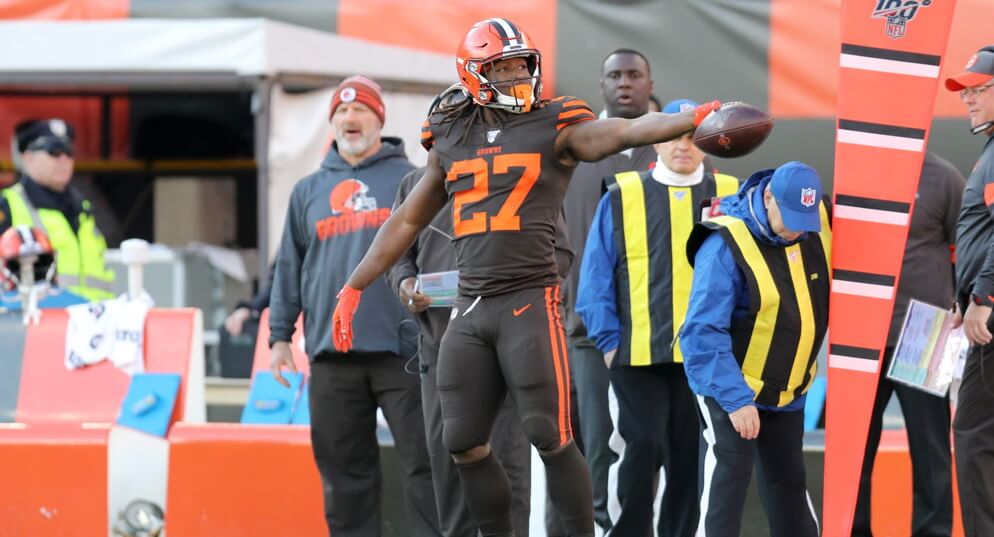 To say my Week 5 Flex rankings are a bit tentative this week would be a bit of an understatement.

Last week, we saw a lot of variables change in a short period. The game between the Tennessee Titans and the Pittsburgh Steelers was rescheduled for Week 7, while the contest pitting New England and Kansas City took place on Monday, sans Cam Newton.

If you thought last week was crazy, buckle up. The Tennessee Titans have had more positive COVID tests this week, putting their Week 5 game with Buffalo in jeopardy. New England cornerback Stephon Gilmore also tested positive, which could raise concerns for both Patriots and Chiefs players. And, oh, by the way, there is another major hurricane scheduled to hit the Gulf Coast. Hurricane Delta could, at the very least, change the location of the upcoming Saints-Chargers tilt.

Fantasy managers will have to consider these potential monkey wrenches into the Week 5 schedule when setting their lineups. For example, I currently have Scotty Miller ranked 48th among wide receivers. That is outside of the standard starting range, both as a WR3 and a Flex. However, a fantasy manager with a WR3 or Flex player in one of the above situations may prefer to start Miller, who plays on Thursday.

That would enable him or her to reassess their matchup come Sunday morning once we (hopefully) have a bit more clarity on the goings-on regarding some of these potential postponements. Besides, plenty else can happen between now and the weekend. For the record, Miller is questionable with a hip/groin issue, so he is no sure thing either. But at least we will know Thursday night whether he will be active. And knowing is half the battle.

Several injuries that occurred last week will have an impact on the fantasy landscape. Nick Chubb and Austin Ekeler both suffered injuries that should keep them out of action for about a month. As was the case with the injuries to Christian McCaffrey and Saquon Barkley after Week 2, there is no easy way for fantasy managers to replace the production of the injured star running backs.

Chubb’s injury opens the door for Kareem Hunt to go from weekly Flex play to potential RB1. The biggest boost in the Week 5 Flex rankings goes to previously unheralded D’Ernest Johnson. Johnson ran for a total of 26 yards in 19 career games before being pressed into action on Sunday. The second-year back responded with 95 yards on just 13 carries. I would not rush to start him as a Flex quite yet, but fantasy managers need to add Johnson in all leagues.

The situation in Los Angeles is a bit less clear. Joshua Kelley was already getting plenty of run in the Chargers backfield and leads the team in carries. However, he has not done a whole lot with his opportunities. Kelley has averaged just 2.85 yards per carry over his last three games and has lost a fumble in back to back games. His lost fumble last week changed the entire complexion of a game the Chargers would go on to lose in Tampa Bay.

Justin Jackson recently returned after missing two weeks with a quad injury, but he may get a bit more work moving forward, especially if Kelley’s struggles continue. Kelley is still the preferred play for Week 5, but this may be a fluid situation in the coming weeks until Ekeler returns.

The news is not all bad on the injury front. Some of the names that are hoping to return in Week 5 include Michael Thomas, Le’Veon Bell, Raheem Mostert, and Alshon Jeffery. They still have some hurdles to clear, so you will not see them atop my Week 5 Flex rankings quite yet. I will update these over the weekend, so expect to see plenty of names jump (or dip) significantly in the next few days. In the meantime, you can comment below or on Twitter if you have any pressing questions before setting those Week 5 lineups.

If you found Mick’s Week 5 Flex Rankings helpful, you’ll definitely want to check out all of our Week 5 Fantasy Football lineup!