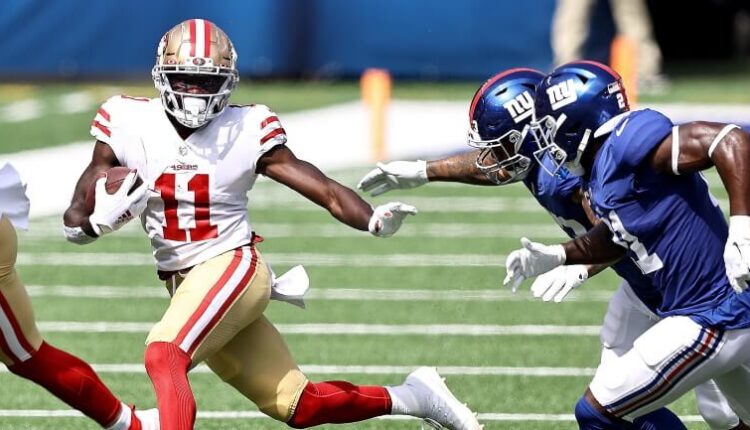 We’ve made it through three weeks of football and now we’re really starting to collect some of the data points we need to make informed decisions. It’s virtually impossible to watch every second of every game, so naturally there are things that you might miss from week to week. This article aims to name mostly under-the-radar, mid-tier, but fantasy-relevant players that are trending up or trending down. You’ll never see me mention that Cooper Kupp is trending up because that’s a headline you can read just about anywhere. You’ll also never see me slap a player like Matt Breida with a “trending down” label, because (with all due respect) who cares? But you will see me hold “star” players to a higher standard by occasionally featuring them in the trending down category.

With Christian Watson and Sammy Watkins both out of the lineup for the Green Bay Packers, Romeo Doubs had the best performance of his young career. Early on this season, Aaron Rodgers has struggled to find a reliable target. This is why Doubs’ performance should catch his eye. The sensational rookie turned in a perfect eight-catch day on eight targets. He turned those targets into 73 receiving yards and his first NFL career touchdown.

Trust is so important to Aaron Rodgers. “It’s going to be the most reliable guys that are out there. If you’re going out there and dropping the ball and somebody else behind you is in the right spot all the time and catching the ball, that guy’s going to play.” I think it suffices to say that a perfect eight for eight counts as being in the right spot. With a great showing on Sunday, Doubs may just have put himself in the position to receive significant snaps even when Watkins and Watson return to full health. Doubs got hot in the preseason, he appears to be trending in that same direction heading into Week 4.

Through the first three weeks of the season, it seemed that every time Herbert touched the ball he was breaking a big gain. He averaged 5 yards per carry in Week 1, 9.5 in Week 2, and 7.85 in Week 3. He was always trending in the right direction. Only getting 9 and 4 carries in Week’s 1 and 2, all he needed was the extra touches to finally make his presence truly known. David Montgomery exiting Sunday’s game provided that opportunity. And believe me, 157 yards on 20 carries is more than enough to catch everyone’s attention.

Khalil Herbert bulldozed his way to a TD 😤

David Montgomery has already been ruled out of this week’s game against the New York Giants. If Khalil Herbert is able to produce on this level again, that should merit more touches going forward, even when Montgomery returns. Montgomery missed four straight games last season, so the team could decide to divvy up the touches more evenly to keep both guy’s fresh. If Herbert is able to consistently be the more electrifying runner then he could wind up the leader of a 60-40 split to end the season.

The return of Jimmy G saw Aiyuk snag his first touchdown of the young season. It is no coincidence that the route-running specialist was able to find paydirt with an experienced pocket passer under center. Aiyuk stands to benefit the most from having Jimmy back under center. Eli Mitchell and Trey Lance were both threats on the ground. With them both gone, and the team still searching for a reliable backup RB, Deebo Samuel will likely be asked to run a ton. With Deebo in the backfield, it leaves Aiyuk as the clear number one wide receiver.

The first game of the season was forgettable for Aiyuk with Lance as QB. Brandon only caught two balls on four targets. Since Lance’s departure early on in the Week 2 matchup, Brandon’s targets have increased. Against the Seahawks, he was targeted 8 times and he matched that mark again this past week against the Broncos. With things seemingly beginning to fall into place, Aiyuk is trending up.

Raheem Mostert is trending up, I assure you. It may not be as obvious as all of the others, but the proof is in the numbers. Mostert has seen his snap percentage rise each week this season. In Week 1-4 his snap percentage was as followed: 42%, 55%, 56%, and 72%. Since Week 2 Mostert has out-carried Chase Edmonds 34- 16. That is night and day from the 5-12 split we saw in Week 1. But lo and behold, Chase Edmonds isn’t a 3 down running back, go figure. Only on the field for 28% of snaps on Thursday Night, Edmonds appears to be relegated to obvious passing down work, although he was able to find the end zone.

With Mostert beginning to dominate the work on the ground, I was curious about his upcoming schedule. His matchups are green as far as the eye can see. He gets soft RB matchups in his next five weeks! He’ll get the Jets, Vikings, Steelers, Lions, and Bears all in a row. If he manages to stay healthy during that run, I’d recommend flipping him. Mostert could make for an interesting piece to include in a blockbuster trade that puts your team over the top.

When word came out in the offseason regarding how much time Justin Fields and Darnell Mooney were spending together, one couldn’t help but get visions of Matthew Stafford and Cooper Kupps’ “Breakfast Club”. Mooney and Fields have been more like the “Leftovers Gang” more than anything else. To be honest, the production has been borderline embarrassing. Mooney is virtually always on the field, playing at least 90% of snaps in every week so far this season. He doesn’t have much of anything to show for it. In fact, he actually finished Week 2 with negative four receiving yards. It’s gotten so bad that the only way for him to get the ball in his hands is to wait until after the game.

For some crazy reason, I actually have Mooney as a sleeper pick this week. I can see him busting out of this slump this week against a stingy New York Giants secondary. I just have to think that the buck stops here. Everyone inside the Bears’ organization has to see that the passing game is pathetic and needs to be addressed. That’s just the way I see it. But until then Mooney is trending down. That will more than likely stay the case if the Bears don’t let Fields throw the ball more than 17 times, a number he hasn’t surpassed yet this season.

Well, it was nice while it lasted. In Week 1 it looked like the Rams had given Henderson the keys to the offense. Cam Akers was nowhere to be found and Henderson looked, well, good. But of course, McVay and the Rams’ coaching staff was just attempting to light a fire under their preferred RB Akers. Unfortunately for Henderson, he’s seen his snap percentage decrease each week this season. 82% in Week 1, followed by 56% and 50% in Weeks 2 and 3.

It would be one thing is the Rams were just giving Henderson less carries. But they seem to be phasing him out of the game plan completely. He went 5 for 5 through the air in Week 1 and hasn’t caught a ball on one target since then. Henderson is actually a receiving threat out of the backfield, so it’s disappointing to see him not being used in that regard. Darrell will be trending down for as long as McVay and Akers’ love affair lasts.

Through no fault of his own DJ Moore is trending down. The star WR has not been able to get anything going with Baker Mayfield. Moore doesn’t leave the football field. He’s been out there for at least 97% of snaps each week this season. You’d never suspect that he’d only have seven catches to this point. He’s been targeted six times each game so far, a number that is less than he is used to, but a number that most WRs can work with. It’s the QB that he can’t work with. It may be time for Moore to hire OBJ’s father to make a video compilation of Baker’s missed opportunities to get him the ball.

I mean, my goodness, Moore hasn’t had more than three catches in any game so far this year. That is clearly not going to get it done. You can sense his frustrations in the video above. But then again there really aren’t that many receptions to be had in this anemic offense. Baker has yet to surpass 16 completions in a game this year. In fact, his completions have gotten lower each week. 16 in Week 1, 14 in Week 2, and a pathetic 12 last week. Until Baker proves why he’s better than Sam Darnold, Moore will be in for more of the same.

Here’s a shocker. Ekeler hasn’t found the end zone yet this season. It certainly doesn’t help that he’s seriously giving up red zone looks to Sony Michel AND Joshua Kelly. I mean make it make sense. Ekeler is not seeing the field as much as he did in previous seasons. 63% represents the largest share he’s gotten so far this season. We should have known that something was up when he was only on the field for 49% of snaps in Week 1. He got up to that 63% in Week 2, but dropped right back down to 56% this past Sunday. His usage has not been what fantasy managed envisioned when they selected him in the first round of drafts.

Austin Ekeler’s lack of usage is blowing my mind

Not only has his usage been down, but his production has also been pedestrian at best. On the ground, he’s been below average. 36 rushing yards in Week 1, followed by a 39-yard game on the ground. And get this, just last Sunday, 5 yards! His only saving grace has been his work as a receiver. In the young season, he already has 21 catches for 139 yards. God forbid Ekeler gets shut down through the air, I don’t want to know what that stat line looks like. He’s trending down and I can’t seem to pinpoint exactly why. Perhaps there are health concerns that are being kept on the hush? That is the only thing that makes sense to me. Otherwise, you’d run your more talented guy out there. If you’ve got him, your playing him, but good luck with that.