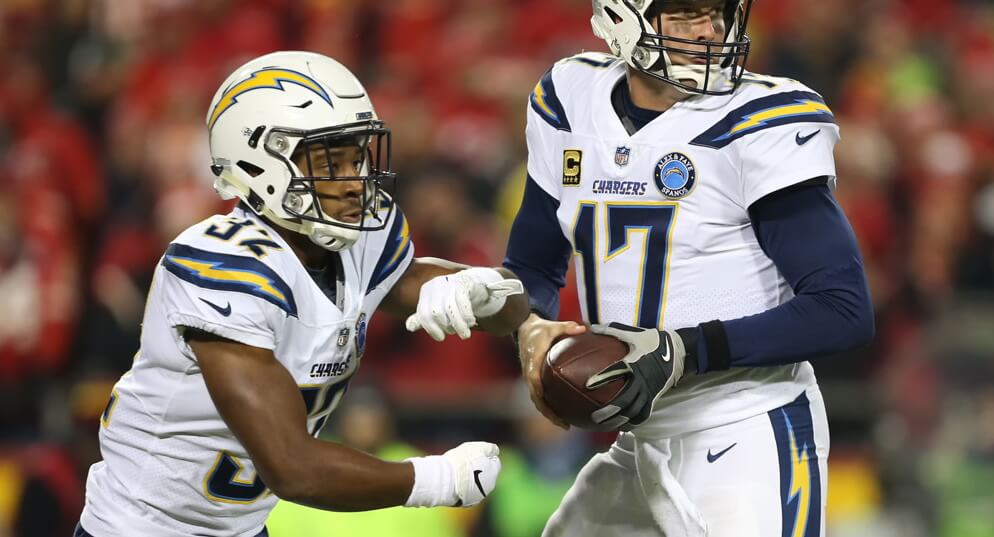 Mike Kurland takes the same great analysis you know from his fantasy baseball Deep Dives and applies it to football in his Deep League Streamers.

Hello and welcome to my new weekly article! Some of you may be familiar with my work if you’re into fantasy baseball because I write a weekly article for Fantrax on the baseball side of things. Well, now it’s time to bring the writing to what the masses really care for and that’s fantasy football!

The idea of this article moving forward is in giving you a player worth streaming at every position that is owned on average in 35% of redraft leagues or less.

At the end, I will give you what I deem “Deep League Dart Throws.”

This will feature a few names owned on average in less than 10% of redraft leagues. These players are a true Hail Mary. So if you’re playing from behind after Thursday night or just ravaged with injury and you need a miracle you could look their way.

I was very surprised to see Kyle Allen was owned in so few leagues. He really came to play last week in his pro debut. I understand the apprehension but he really did look the part. He had all of us saying “Cam who?” I know it’s been a few days, so here is a little reminder.

This is great analysis by @PhilSimmsQB and @BMarshall, re: Kyle Allen.

“That was an experienced play.” #Panthers #KeepPounding pic.twitter.com/tUgHTgDbPT

Allen was able to pick on a weak Arizona Cardinals defense. Well, his confidence is up and he gets to take on the Houston Texans defense that has shown to be a bit vulnerable to the pass.

The Texans D has also allowed the sixth-most receptions and sixth-most air yards to opposing teams!

This has been a very drawn out way to say there is a good opportunity here for Kyle Allen and company to keep the good start rolling. Unfortunately, the Texans have been a bit greedy and have only given up 16.1 fantasy points per game to opposing QBs. With all the yards and passes they allow, that feels flukey and it wouldn’t take much for Allen to fall into two touchdowns.

With just about EVERY running back worth a lick being rostered these days, Justin Jackson just sneaks in under the 35% owned mark and is the highest owned player on this list.

This is one of the easier streams to suggest this week. Jackson and the Chargers get to take on the Miami Dolphins. The Dolphins allowed Tony Pollard just last week to run wild on them. Pollard, the SECOND STRING running back for the Dallas Cowboys, ran for 103 yards and a touchdown on just 13 carries. With that said, I expect more usage and more opportunities this week than Jackson typically gets.

Since I brought it up, let’s discuss that horrendous Dolphins defense just for a brief moment.

The Dolphins have allowed a league-worst 624 yards on the ground already on the season. The next worst team has allowed 118 less yards. They’ve also allowed a league worst 6 rushing touchdowns vs running backs. I see a lot of opportunity for Justin Jackson to have a field day. I’d start him with confidence as a flex this week.

Paul Richardson, even before Scary Terry popped onto the injury report, is my FAVORITE deep league stream this week. He’s a solid WR3 with WR2 upside as is, and if McLaurin is out or limited this week I’m all over Richardson. It doesn’t hurt that a matchup vs. the New York Giants is on the menu. That is as good as it gets for an offense.

The Giants D has given up the most passing yards and the most air yards in the league through the first 3 weeks. 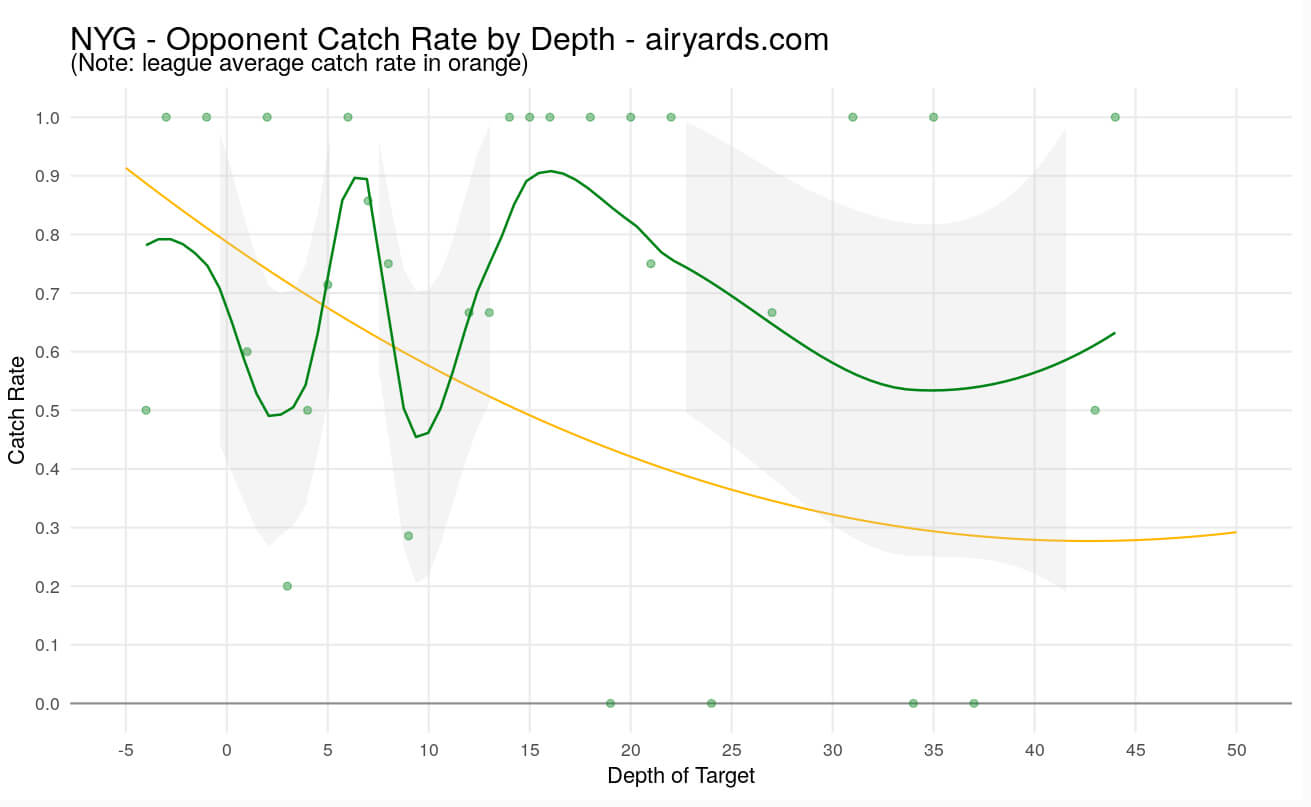 As you can see, the catch rate for deep passes is above the league average. This could or SHOULD mean big things for the Redskins wideouts come Sunday.

Lastly, it’s worth mentioning Paul Richardson has had his utilization increased every week. Outside of the target total in week 2, the rest has been trending upward.

As I said at the top of the of this breakdown. He’s my favorite streamer this week!

The picture and stats are a bit outdated but it’s all they had so we’re going to run with it.

The tight end position is so volatile from even the mid- to upper-tier guys, it was truly a challenge to choose a streaming tight end. Well, I managed to. This is a complete desperation move but this week I’d take a shot on Tyler Eifert.

There is a good chance for a touchdown this week. He’s facing a Steelers defense who’s allowing the fourth most points per game to the tight end position at 14.7 points per game.

Although Eifert hasn’t seen many targets or receptions, he has received at least one red-zone target and one red-zone catch each of the last two games. This contest is a great chance for a touchdown in what should be a solid offensive outing for the Bengals. Unless Andy Dalton goes full Andy Dalton during prime time.

Anyone who has followed fantasy football for a while knows exactly how bad he’s typically been in prime time games.

These are just a few names worthy of mention available in most redraft formats.

QB: Case Keenum, Redskins – I love the matchup against the Giants. He’d be a higher priority if it weren’t for the potential for Haskins to come in at any moment. Keenum isn’t great in real life but has been great for your fantasy teams I’m the past and if you’re in a pinch, roll him out there.
RB: Giovani Bernard, Bengals – If Mason Rudolph doesn’t show up to play in this matchup, then there’s a great chance Mixon will get some rest as the Bengals cruise to victory. That’s where Gio comes in for the garbage time production. There’s also the chance Mixon aggravates his injury. You can’t project injury but it is possible. This is for the deepest of deep leagues and an absolute Hail Mary as an RB play this week.

WR: Preston Williams, Dolphins – Yes, I’m suggesting a Miami Dolphins player. Yes, I’ve likely lost my mind. Just hear me out. Williams had 12 targets last week with Rosen and has seemed to emerge as a go-to wideout. He’s even getting targeted in the red zone. Yes, the Dolphins have been to the red zone… I think…

WR: Trey Quinn, Redskins – Surprise, surprise, another Redskin. This is mostly contingent on Terry McLaurin being out. If he’s out, Quinn becomes a very intriguing dart throw.

That’s going to do it for this week’s Deep League Streamers! Thank you so much for taking the time to read this. Any feedback in the comments is appreciated or just hit me up on Twitter to let me know your thoughts. Let me know if you used any of these players and if you found this helpful. Also, let me know what I could do to make it better or more helpful.

As always, I appreciate you reading and good luck with your week 4!