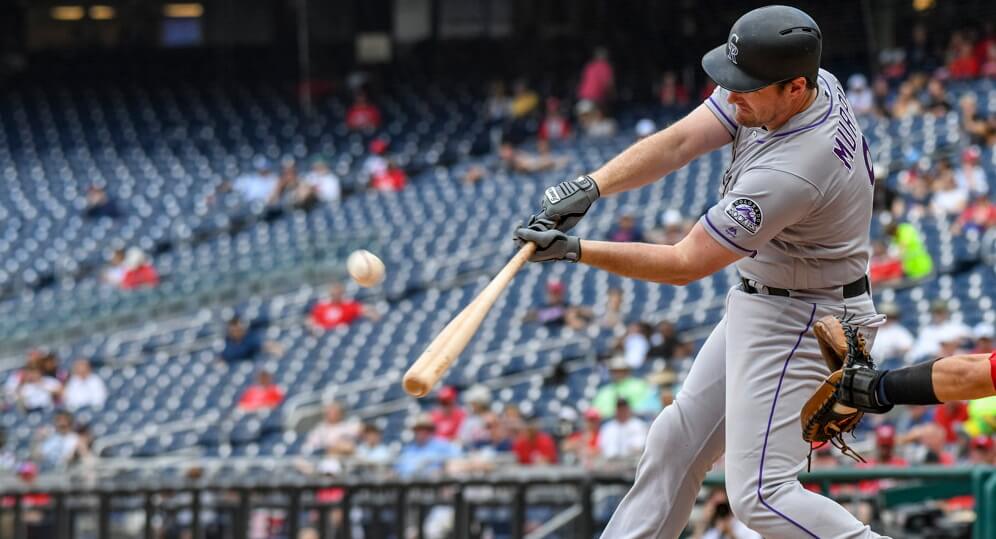 We’re almost into Week 3 of fantasy baseball leagues. Monitor the news and schedules, especially with delays and postponements for weather or COVID-19 concerns. Last week the Trout family welcomed their baby boy, and he returned to action on Tuesday only to hit three home runs in two games. As always, we’re listing the teams with easier and tougher week 3 hitter matchups. Also, we’ll look at favorable hitter matchups for several players that you’ll want to plug into your lineup this week. Last week I suggested to start your Rockies, and guess what they play all their games at home this week. Don’t forget to check out Eric’s waiver wire article and the two-start pitcher article by Chris to plan for Week 3.

The Red Sox, Phillies, and Diamondbacks pitchers rank in the bottom five of the league in wOBA allowed. Outside of Jacob deGrom and Seth Lugo, Mets pitching needs help. Surprisingly the Orioles rank middle of the pack in ERA (21st) and wOBA (12th) allowed. Regardless, the Phillies bats project for fruitful week 3 hitter matchups. The Rockies play six games at home this week – start the studs and plug in the fringe guys in deeper leagues.

The Angels face the Athletics and Dodgers, and their pitchers rank in the top five in wOBA allowed. There’s only been one postponed game for Indians and zero for the Royals. The Indians played a doubleheader the following day after the postponed game in week one.

There are several postponed games yet to be scheduled for the Yankees and Marlins, meaning they’ll likely play more games in week 3. If they play doubleheaders in week 3, then scratch them off the tougher week 3 hitter matchups.

The Tigers and Cardinals hitters have the potential for additional plate appearances with the doubleheader. However, with doubleheaders, we’ve seen hitters play in one game while sitting in the next. The Phillies have a full slate of seven games scheduled but had several of their games postponed.

Renato Nunez smacked two home runs against the Marlins on Thursday. On the season, he’s hit five home runs, 13 runs, and 11 RBI while slashing .292/.382/.688. Nunez hits in the middle of the Orioles’ lineup while providing a serviceable source of batting average. He’s rocking a 45.5% hard-hit rate with a 96.7 mph average exit velocity on FB/LD that ranks 37th. However, Nunez’s expected stats show he’s likely outproducing with a .237 xBA (36th percentile) and a .544 xSLG (72nd percentile). With three games against the Phillies, Nunez looks to ride the hot start into week 3.

Let’s try this again with JaCoby Jones. With eight games scheduled due to the doubleheader against the Cardinals, start Jones in week 3 as he continues his hot start.

Howie Kendrick and the rest of the Nationals haven’t played many games recently due to postponements. However, the Nationals play the Mets and Orioles this week, meaning Kendrick should eat. On Tuesday, Kendrick smashed his first home run on the season against the Mets. Although it’s a small sample, Kendrick’s still crushing the ball with a 52.4% hard-hit rate and a 92.4 mph average exit velocity on FB/LD (No. 130) tied with Manny Machado.

Gio Urshela had a six-game hit streak from July 31 – August 6 with two or more hits in three of them. During this stretch, Urshela’s slashed .455/.478/.955 with three home runs, five runs, ten RBI, and one steal. On the season, his 58.1% hard-hit rate ranks in the 95th percentile paired with a 95.8 mph average exit velocity on FB/LD (No. 57) tied with Matt Olson. Although the Yankees only play five games this week, ride Urshela’s hot streak.

Daniel Murphy and the Rockies play all six games at home this week. This season, he’s provided a healthy source of batting average with a hit in eight out of 11 games. Murphy’s slashing .342/.390/.632 with three home runs, five runs, and ten RBI. On Roster Resource, he’s listed as a platoon bat against right-handed pitchers, but he’s played in 11 of 13 games with one as a pinch hitter.

Ryan McMahon isn’t hitting well so far with one home run, six runs, five RBI while slashing .214/.320/.357, and a 14% walk rate that’s keeping his OBP semi-afloat. With six games at home in week 3, let’s hope McMahon heats up. McMahon’s 25% line drive rate is up from his 21.7% career average. He’s also pulling the ball significantly more with a 45.8% pull rate when he typically sprays the ball all over the field. McMahon’s 89.2 mph average exit velocity ranks in the 83rd percentile, and that’s the only red section on his Statcast page. Also, McMahon’s 93.5 mph average exit velocity on FB/LD (No. 108) ranks him right behind Michael Conforto. Home matchups for Rockies hitters tend to be fruitful – start McMahon this week.

If you haven’t heard of Dylan Moore, then keep an eye on this dude because he’s off to a hot start. In ten games, he’s hit .289/.308/.553 with two home runs, seven runs, four RBI, and three steals. A few notable differences in his batted ball profile include an increase in line drives (25%), a drop in ground balls (29.2%), and an increase in pull rate (48%). Moore’s 56% hard-hit rate (93rd percentile) and 97.2 mph average exit velocity on LD/FB (No. 32) appears to back up the hot start. If he’s available on waivers, then grab him, especially in deeper leagues.

Chris Taylor’s better suited for daily lineup leagues since the Dodgers shuffle him in and out of the lineup. From July 31 – August 7, Taylor’s slashed .333/.391/.571 with one triple, one home run, four runs, five RBI, and one steal. He’s played in every game this season with one pinch-hit appearance. Taylor’s also rocking a 43.8% hard-hit rate (79th percentile) with an astounding 101.8 mph average exit velocity on FB/LD (No. 4). That’s not a typo, and there’s a picture below as evidence. The Dodgers have a full slate of games, and Taylor’s a sneaky sleeper this week. 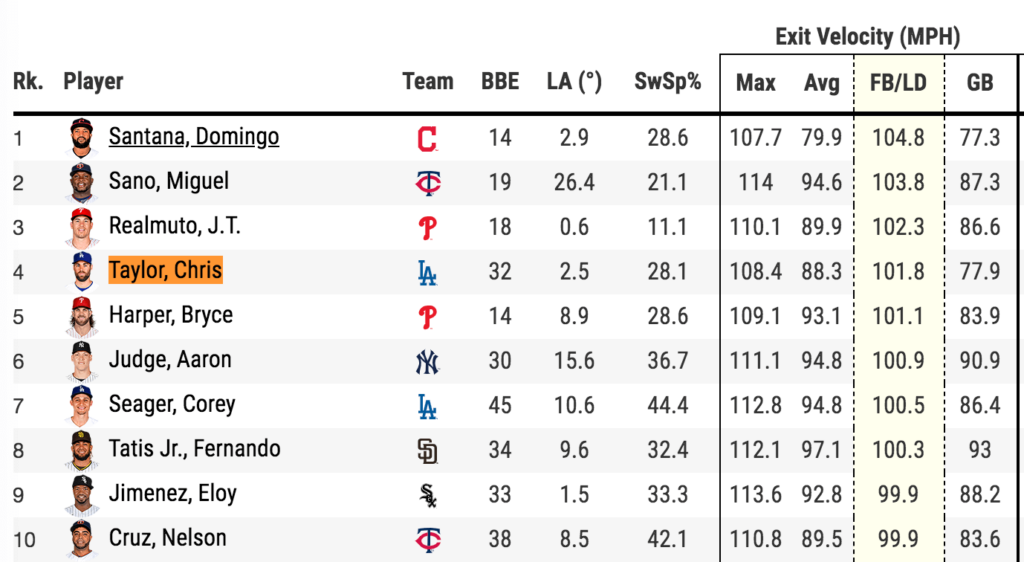 Matt Kemp’s playing all six games at home this week. He’s played in ten games, although only started in six of them with pinch-hit appearances in the other four. Kemp falls in the deep sleepers group because he’s not playing every day and better suited for daily lineup leagues. He’s not a league winner by any means, but he’s slashing .286/.394/.571 with two home runs, six runs, and eight RBI. In deeper leagues, Kemp could be a sneaky sleeper hitter this week.