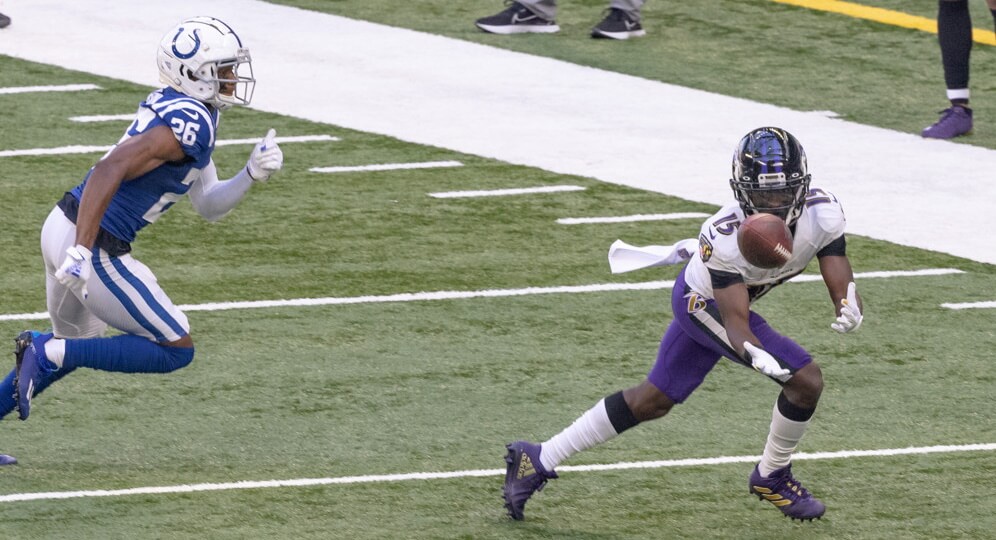 Liam Gibney tries to keep up with the ebb and flow of the NFL season with his Week 3 Fantasy Football Stock Watch.

Brandin Cooks has surprised a lot of fantasy managers this year. He is a wide receiver in one of the thinnest Receiving rooms in all of football. He has received 8 to 12 targets and each of his three performances so far this season and he has the clear-cut WR1 in this offense… Even when the opposing team plans their defensive game plan around him, he is still having success. The only concern for his fantasy stock would be if you were traded to a team where he became the WR2. This is pure speculation though, I would be targeting him everywhere via trade. He has a very safe floor up to this point.

As far as target shares go, TJ Hockenson has one of the best in all of football. He had a 25% target share in Week 2. There have been a lot of people that have called him this year’s Darren Waller, and they are not that far off. He looks to be Jared Goff’s top target and will likely score a ton of touchdowns this season. Production at the tight end position is hard to come by, especially with target shares like this, which make Hockenson special in 2021. He has seen 20 targets over the first two weeks. That is an insane target workload, especially for a tight end.

Before the season started the majority of the fantasy community assume; that this would be a Mark Andrews show. In fact the opposite has happened, as Marquise Brown has become the top target in this Ravens offense. Going back to his last eight games including last season Marquise Brown has been extremely productive. The speed, the deep threat potential, and the talent is all there. The biggest X factor is the target share and if he keeps up this pace he is due for a very good season.

I am concerned about Mike Davis to say the least. He entered the season as the lead back for the Falcons but has not done much with the role. Cordarrelle Patterson is far and away the better pass-catching running back at this point, plus Davis only out-touched him 9-to-7, which takes a lot of value out of Mike Davis, especially in PPR leagues. I don’t think he will lose this job but it’s hard not to acknowledge the fact that Cordarrelle Patterson and Wayne Gallman Jr. are sitting right behind him ready to take carries away from him.

Where are all the Ronald Jones truthers at? Ronald Jones has pretty much been a non-factor in this Buccaneers offense. It is clear that Leonard Fournette is the preferred running back in this offense, and after the Week 1 Ronald Jones fumble, we have not seen too much of him since. Not to mention, he does not really get the goal line carries that he would need would make him even an RB2. I would steer clear of him starting him for the rest of the season, but he should not be dropped in case Leonard Fournette goes down without injury.

The Dolphins are simply not using Gaskin in a bell-cow capacity, and likely never will this season. He only saw nine carries in Week 1, and five carries in Week 2, though he has seen five targets in both weeks. The issue here is that there is no real ceiling with Gaskin unless he is getting 15-20 carries a week. Maybe that day will come, but I am growing increasingly uncertain about it, and there is also the fact that Brian Flores likes to use Malcom Brown as a change of pace back. Lastly, because there haven’t been too many chances, there is still a bit of grey area surrounding the goal line back situation as well. I am selling Gaskin everywhere if I can, in an effort to not put myself through this headache of a backfield.