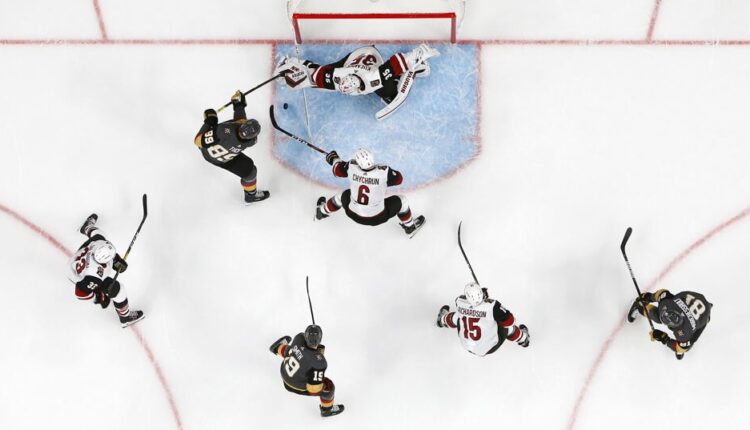 Last week on my FantraxHQ podcast “Fantasy Hockey Life” I went over how to win your playoff head-to-head matchups.  Hint: it involves a lot of preparation.  If you have made it this far in your season you probably have a very good team.  Nonetheless, you are probably going to want to throw some darts in week 23.  I am here to help you with that.  All streamers listed in the Week 23 Fantasy Hockey Planner are owned in less than 50% of Fantrax fantasy hockey leagues as I write.

In addition to our fantasy hockey planner, be on the lookout for our waiver wire column and all the rest of our Fantasy Hockey content.

Standard disclaimer: weekly leagues are not about what days games are on, they are about how many games your guys play.  A 4-game guy only needs to be half as good as a 2-game player to match the results. Your weekly roster moves and an open slot are as significant a resource for your team as a good player is.  Repeat after me: win most games played every week.

15 of 31 teams play 4 games this week.  Hopefully, a full half of your star players are ready to go.  14 play 3 games.  Only the Flames and Jackets have a 2 game week ahead.  If you are relying on a marginal player for one of those teams, you need to make a move.  It has come to the time of year where you do not owe, for example, Cam Atkinson anything.  He is a player you wanted on draft day and has had great performance over the years, but he is missing time and it is past time to stash players you hope will come around.  If you need a streaming starter, try one of these guys instead.

Nino Niederreiter (LW/RW- CAR) has underachieved this year.  While the 27-year-old Swiss winger has never been a star, 27 points in 63 games is a decline in his scoring rate.  All I can hope for next week is the pairing with Martin Necas and Vincent Trocheck we have seen in a couple of recent Canes games keeps happening.  Niederreiter gets plenty of power-play time.  He is a poor source for shots but dishes out almost a hit per game.

Jesper Bratt (LW/RW – NJ) is a first-liner on the Metro division’s last-place team.  Recently the Devils have been frisky, including a 6-game point streak at the end of February.  Bratt led the Devils in that time with 4 goals, tacking on 3 assists.  A couple of shots and half a hit, half a block per game are not exciting.  Still, they might be very useful to your playoff push.

Kevin Hayes (C – PHI) is the hottest scorer on one of the NHL’s hottest teams.  Philadelphia was thought by many (or maybe just me) to be an afterthought in the stacked Eastern Conference.  Instead, they are jarring with the Capitals for first place in the Metro division.  Hayes has 8 points, 20 shots, and 8 hits in the last 6 games.  Scott Laughton and Travis Konecny have proven very effective linemates.  While Hayes’s ATOI hovers around 16:30, he gets decent power play time.

Scott Laughton (C/LW – PHI) is evidence I am willing to one line twice.  Logically, Laughton’s point count has crested with Hayes’s over the past two weeks.  Laughton is not, however, as strong an option as his centerman.  While Laughton does not get a role on Philly’s power play, Laughton will add hits.  For the year he has averaged 2 hits per game.  Laughton’s shot count is lower – only 1.5 per game.

Week 23 is when I go off the grid and declare a different set of quality games.  Technically, Monday, Wednesday, and Friday are the only games with a minority of teams playing, with 10 per night.  Sunday has 18 but Tuesday has 16.  If I was not already a huge fan of early-week streaming, I especially am this week.  The bad news is there are no Monday/Tuesday back-to-backs to get your team off to a particularly strong start.  There are 7 teams with 2 games in the Monday-Wednesday stretch, though. More bad news is this week’s available streamers are not the strongest set.  Let the buyer beware that my 4 below are pure volume and upside plays. Here are the guys from those teams to get you an early lead next week in games played.

Tyson Jost (C/LW – COL) The second week of the great Avalanche schedule chase is on.  Like week 22, the Avalanche play the “traditional” 4 quality game schedule of Monday-Wednesday-Friday-Sunday.  This week I am rolling dice on Tyson Jost, whose 2 power play assists Wednesday night no doubt helped a lot of teams.  He has points in 4 of 5 games and recent playing time spiking over 17 minutes per game.  Line deployment is…not great.  Valeri Nichushkin, a past subject of this section, throws a hit per game, as Jost does.  Third wheel Martin Kaut just rolled back down to the minors, leaving a vacant wing spot.

Zach Sanford (C/LW – STL) That insanely hot Perron/Sanford/Thomas line has cooled considerably since mid-February.  In the past 3 games, Sanford’s contributions add up to 3 shots, 5 hits, and a block.  Power Play time has become more irregular.  Still, that perfect 4 game schedule next week is very tempting.  I will not say this play is a great one, but it is a direction to look if you are very hard up.

Nathan Beaulieu (D – WPG) is your bruiser of the week.  Paired mostly with Dylan DeMelo, Beaulieu’s ATOI has spiked to top-pair levels.  That has come with very healthy peripherals numbers.  In the past 6 games, Beaulieu has gone for 13 shots, 7 hits, and 16 blocks.  If you are targeting the physical stats as the key to winning your league, this is a man who should be on your streaming radar.

What else would you like to see in our Fantasy Hockey Planner? Let us know in the comments below.

Fantrax was one of the fastest-growing fantasy sites of 2019 and things are just starting to heat up! With multi-team trades, designated commissioner/league managers, and drag/drop easy click methods, Fantrax is sure to excite the serious fantasy sports fan – sign up now for a free year at Fantrax.com.