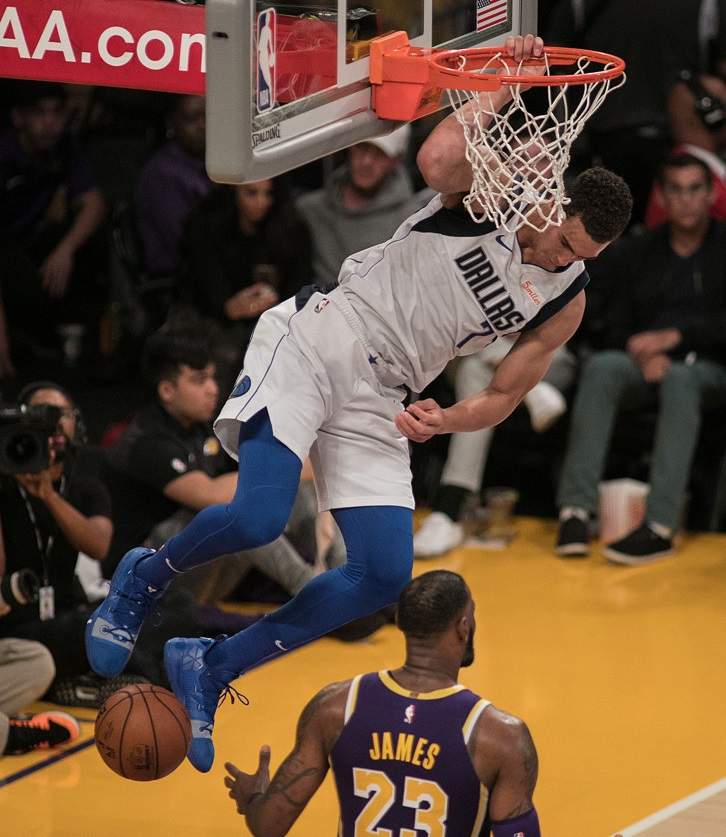 Well, we knew the Knicks were trying to go young but no one expected younger than Kristaps Porzingis. Lots of moving parts mean new roles, and that’s especially true in Dallas. New Orleans finds themselves in a somewhat similar situation as New York. Anthony Davis is still on the team, but do they shift into rebuild mode at the trade deadline and see what they have in their young assets? One youngin’ has definitely put himself on notice as of late. What about returns from injury? LeBron James and Chris Paul are back but still no word on Deandre Ayton or Jamal Murray who are still MIA.

Dwight Powell is the big winner from the Porzingis trade in Dallas. He’s fully expected to step into DeAndre Jordan’s role as the starter for the remainder of the season. Expect his minutes to jump into the mid to high 20’s. He won’t score 20 a night, but Powell’s strengths revolve around rebounding and FG% in terms of fantasy. Powell can also stretch the floor with 1.4 three-point attempts per game. With the bump in minutes, it’s not out of the realm of possibility that Powell becomes a solid fantasy contributor for the rest of the season.

While Powell’s minutes are expected to see a nice bump, so are Maxi Kleber’s. Kleber, on the other hand, brings a bit more to the table with more consistent 3-point shooting and defensive contributions. I expect Powell to get the first crack at major minutes due to his synergy with Luka Doncic, but Kleber will be the man coach Rick Carlisle goes to when using small ball rotations. Kleber’s versatility gives him the advantage over Powell long term, but Powell’s tenure and familiarity will give him the early nod. Both Mavs big men are solid adds in week 17.

Pretty good week 16 from Napier who is averaging 19.7 points, 5.3 assists and 1.3 steals over his last three. It’s too bad his shooting percentages are still awful but we know what we signed up for. Nevertheless, Napier should continue to backup the Nets’ All-Star until Spencer Dinwiddie’s return. If you’re punting FG% there’s no better pickup right now than Bazz heading into week 17.

The Cavs may have found their center of the future in Zizic. He hasn’t slowed down in his past 8 games, averaging 14.6 points and 9.5 boards. His game right now might be too one-dimensional with a lack of defensive contributions. But he’s going to provide owners a nice boost in FG%, points, and rebounds for the rest of the season.

Morris has taken full advantage of the injuries in Denver. Gary Harris has been in and out with injuries, and now Jamal Murray caught the bug. Rumors are swirling that the Nuggets could be in play for Anthony Davis, and Monte Morris’ emergence is one of the reasons why. The Nuggets have assets in Jamal Murray and Michael Porter Jr to entice the Pelicans. If Murray is a part of a deal, Morris instantly slides into his role. He’s averaging over 38 minutes in his last two games, both starts, and flirting with triple-doubles. Morris is a worthy pickup while Murray and Harris are out, with a chance to snatch a starting spot if the Nuggets make a splash at the trade deadline.

Much like Morris, Beasley has taken his opportunity and run away with it. Beasley’s sharpshooting is an upgrade over Harris and it was on full display Friday night. Outside an 8-minute outing against Utah, Beasley has chained together 11 games of at least 13 points on nearly 60% shooting. He’s knocking down 3.2 threes and 17.1 points over his last 12 and is just 4% away in free throw percentage from joining the 50-40-90 club. But Beasley hasn’t been able to chip in other areas. It looks like the production will continue to close out the season, but his categorical impact across the board is limited.

Bridges keeps finding himself on the waiver wire list week after week. It’s understandable because, on the surface, his numbers aren’t eye-popping to fantasy owners. Yet, Bridges continues to be a premier source for steals just sitting on the waiver wire. He’s also nailing 1.5 treys on 51% shooting over his last 10 games.

Who? Williams seemingly came out of nowhere the past couple of games with 30 and 38-minute outings. New Orleans is set to be a seller at the trade deadline, so a bigger role could open up for him. Williams will mainly contribute in scoring and rebounding with some defensive upside. He’s been contributing right now too, so he can be a nice streaming option so long as Mirotic, Randle and Anthony Davis are out.

A couple of Grizzlies round out the top 10 waiver wire adds for week 17. Rabb is getting some run of late and has played well. His 12.5 points and 7.5 boards will make it hard for coach Joerger to keep him out of the rotation in the future, especially with the trade deadline looming. The Grizzlies are going to be sellers this week, and the departures of Marc Gasol and JaMychal Green would signal big minutes for the 2nd year big man.  He’s a nice flyer for week 17 with the potential of a bigger role by the end of the week.

While Caboclo has seen more consistent minutes as of late, I have him behind Rabb because he’s on a 10-day contract. Caboclo has seen 26.6 minutes per game over his past four, so it’s likely he gets another 10 days. Whether it’s before or after the trade deadline on Thursday remains to be seen, so Bruno would only really be an option in 14-team leagues or more. He’s getting real close to his “two years away from being two years away” timeline.