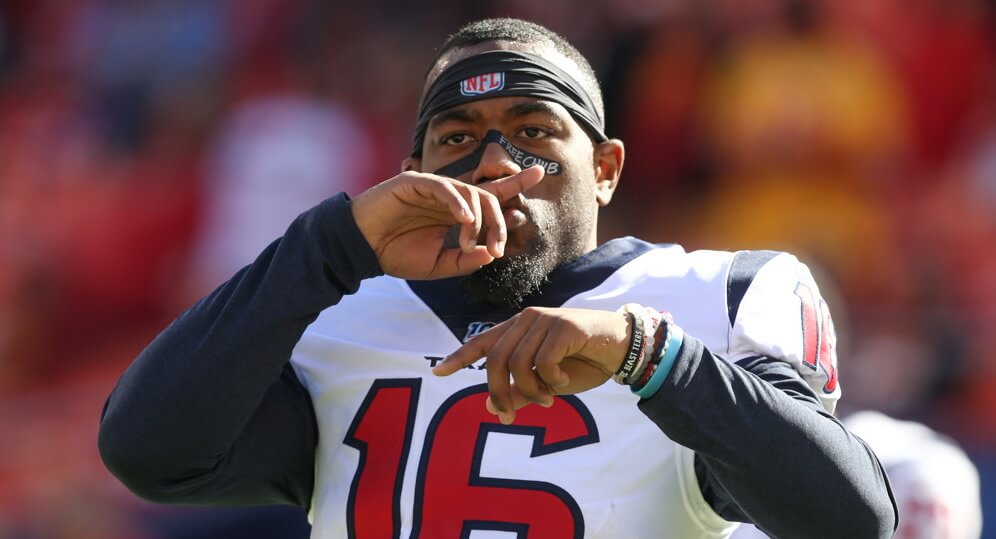 Happy Holidays! Have you made it to the fantasy championship game this week despite having had to overcome injuries or suspensions or just plain duds in Week 15? Perhaps you lost Antonio Gibson to injury and are forced to start some iffy options at RB2, or maybe you’ve been streaming at WR2 since Will Fuller‘s suspension. Whatever the case might be, don’t despair. There are still potential gems to be mined from the list of available free agents if you need some desperation Week 16 flex plays.

Before we get to the list of players who could help win you a fantasy championship, here’s a quick suggestion and what you might do with some of your winnings if you do end up victorious on Tuesday morning. A few years ago, Julio Jones helped me overcome a large deficit in Week 16 to win a fantasy championship. Exuberant at the win, I looked up what causes he supported and donated a portion of my winnings to the International Justice Mission, a charity which is working toward ending human trafficking and modern-day slavery.

Since then, I’ve made it a point to donate 10 percent of fantasy championship winnings each year to a charity supported by my top-scoring player from that week. I’ve seen similar proposals on Twitter and elsewhere, so I will in no way take credit for this, but I do staunchly support it. If you’re reading this and are in a stable financial situation playing fantasy mostly for fun and not the money, then please consider donating a portion of your winnings. Whether it’s 10 percent or even just $10, whatever you feel comfortable with giving could go a long way to helping good causes and those in need. And if anything, consider it good fantasy karma for next season as well.

That’s the end of my spiel. First things first, you have to win the fantasy title to donate a portion of the prize! So let’s get to the fantasy advice that will hopefully lead your team to victory this week. If you need some fill-in Week 16 flex players, here are a few names who might still be available in your leagues. Remember that these are all low-key options (rostered in fewer than 50 percent of leagues even after this week’s waiver run), so obviously add guys like Le’Veon Bell and Tony Pollard over this list if they’re somehow available in your league. Congrats if you’ve made it to the fantasy championship game, and best of luck in your match-ups this week!

In the two games since Will Fuller‘s suspension with both Brandin Cooks and Keke Coutee active, Coutee has seen 16 targets to 15 for Cooks. And yet, Cooks is rostered in far more leagues. The Steelers imploded against the Bengals on Monday night, but outside of that game, Cincinnati’s secondary has been mediocre at best. Coutee remains on the WR3 radar with touchdowns in back-to-back games, and he was close to a third score last week were it not for a goal-line fumble.

Since Mitch Trubisky‘s return as the starter in Chicago after their bye, Darnell Mooney has been the clear no. 2 receiver with 22 targets over the last four games behind only Allen Robinson. Mooney has scored touchdowns now in back-to-back games, and he’ll face a Jacksonville secondary this week that’s top-10 in fantasy points allowed to opposing wide receivers and top-five in receiving yards allowed to opponents this year.

Although Greg Ward scored two touchdowns against Arizona last week, it was Jalen Reagor who tied for the team lead in targets with eight alongside Dallas Goedert. The ankle injury is a concern, but with Reagor already practicing on Wednesday, there’s a fair chance that he could play. If not, both Ward and Alshon Jeffery could be desperation flex options with upside against a Dallas secondary that’s top-five in fantasy points allowed to opposing wide receivers.

The Dolphins are dealing with a plethora of injuries to their pass-catchers. Lynn Bowden’s production this week would be dependent upon whether DeVante Parker, Mike Gesicki, and Jakeem Grant are able to return from injury. But if one or more of the trio are unable to play, Bowden could again lead the team in targets and receptions as he did against New England last week. It helps too that an already struggling Raiders secondary is also dealing with injuries, and this could be a rare rookie revenge game.

With Todd Gurley playing limited snaps due to his arthritic knee, Ito Smith has been declared the lead back. The Chiefs have struggled to stop the run, but more importantly, expect Kansas City to jump out to an early lead in this game. Smith led the backfield last week against Tampa Bay with three targets even when Atlanta was leading for most of that game. If the Falcons are facing a multi-score deficit in the second half against the Chiefs this week, Smith could see even more receptions, boosting his PPR floor and ceiling.

With Raheem Mostert having been placed on injured reserve, Jeff Wilson Jr. and Jerick McKinnon should both see increased roles this week. Wilson is likely to see most of the rushing attempts, but McKinnon should get some carries as well as increased targets out of the backfield as the preferred pass-catching back, especially with Arizona favored in this game. Plus, Wilson is dealing with ankle and hamstring injuries of his own, and there’s a chance that he could exit this contest early if he gets banged up again, giving McKinnon some added upside.

Green has been awful this year, and Ryan Finley‘s 89 passing yards on Monday night against the Steelers gives the entire Cincinnati offense a dangerously low floor. That said, if Tyler Boyd remains in concussion protocol and misses this week’s game, both Tee Higgins and A.J. Green should see increased target volume. If you’re desperate, Green does has some upside this week with Houston’s secondary top-10 in fantasy points allowed to opposing wide receivers, and they’ve given up four touchdowns to wide receivers over the last two weeks.

If you have absolutely no other options, Rodney Smith worked in as the complementary back alongside Mike Davis last week. With Carolina trailing Green Bay for most of the game, Smith played on a season-high 35 percent of the offensive snaps and saw four targets as a receiver out of the backfield. If the Panthers struggle to get things going on offense against a tough Washington defense this week, Smith has some PPR upside if Carolina were to fall behind again this week.

Like Meng’s Low-Key Week 16 Flex Plays? Check out the rest of our Week 16 Fantasy Football lineup!