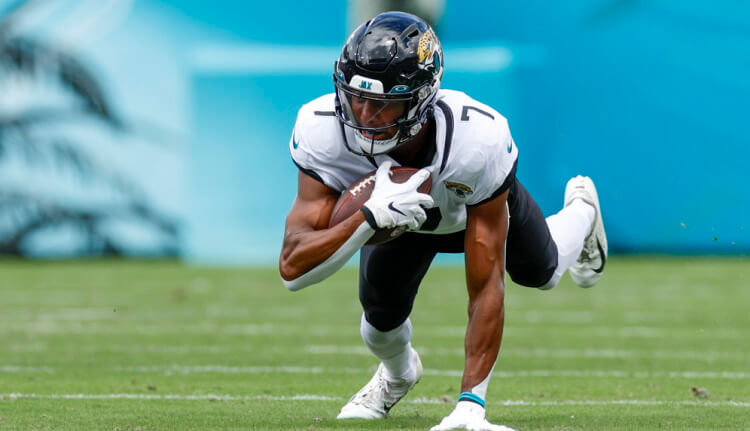 The calendar has flipped to December and the fantasy football playoffs are within reach. With just two weeks left in the fantasy regular season, this is a pivotal week for that playoff push. Only two teams are on a bye this week, which should give us a fair amount of Flex options. As we all know, however, we still have to push the right buttons. That means starting the players who can lead us to the promised land. I’m a “start your studs” kind of guy in most situations. You do not want to watch one of your heavy hitters go off from your bench while your season hangs in the balance. Still, there are plenty of tough decisions to be made this week. Here are my Week 13 Flex rankings, which should assist you in your playoff quest.

As we enter Week 13, eight teams allow at least 23 fantasy points per game to opposing running backs. Interestingly enough, six of the eight square off against one another on Sunday. The two most generous teams on the ground face off when Cleveland takes on Houston. Another pair of bottom-five fantasy run defenses play each other as the Las Vegas Raiders host the Los Angeles Chargers. And, not to be outdone, the Packers and Bears, both of whom are in the top four in terms of rushing yards allowed to the position, go head-to-head in a game where weather may be a factor and both quarterbacks are dealing with injuries.

I don’t think you need me to tell you to start the obvious running backs in any of these games. Six of my top 14 running backs for Week 13 come just from these three games. And I would venture to guess that I am not alone in that assessment. But this could be a week where disappointing players like AJ Dillon and Kareem Hunt may be in play. I have both outside my top 30 running backs for the week, so I would not go out of my way to start either one if I have more trustworthy options. However, if you find yourself a bit thin on Flex options, they could be useful this week.

Rachaad White got the nod for Tampa Bay last week with Leonard Fournette out. Other than an early 35-yard run, White did not get much going on the ground. He ended his day with 64 yards on 14 carries. He did, however, reel in all nine of his targets from Tom Brady. That was enough to vault him into last week’s top-15 in half-PPR leagues. We do not yet know Fournette’s status for Week 13. This could be a frustrating situation for fantasy managers, as the Bucs play on Monday night. I currently have both backs ranked as borderline Flex plays, but hopefully, we will get more clarity before the weekend. If you have Fournette on your roster and not White, you may have to play someone whose game takes place on Sunday rather than risk a zero.

The Los Angeles Rams and New York Jets each feature a pair of running backs who may also be useful this week, particularly in deeper leagues. Neither Kyren Williams nor Cam Akers did a great deal last week to provide fantasy managers with much confidence in either player, especially given the team’s issues at quarterback and wide receiver. But fantasy managers grasping at straws can at least point to a favorable Week 13 matchup against Seattle. The Jets, meanwhile, may start Zonovan Knight if Michael Carter cannot go due to his ankle injury. Knight will have to contend with Ty Johnson and possibly James Robinson but should see early-down work against the Minnesota Vikings. Minnesota has allowed 399 total yards and four scores to running backs over the last two weeks, though most of that damage has come via receiving production.

Trevor Lawrence and the Jacksonville Jaguars passing offense are starting to show signs of life in recent weeks. Lawrence has gone three straight games without an interception and completed an incredible 76.9 percent of his passes in the process. Among the beneficiaries of Lawrence’s efficiency is Zay Jones. Jones has caught 24 passes in those games for 253 yards. He is a top-20 fantasy wideout over the last four weeks despite only playing three games and not scoring a touchdown. I do not quite have him ranked that high, but I do believe fantasy managers should start Jones this week. I think Jones is a mid-range WR3 in 12-team leagues against the Detroit Lions. The Lions have allowed the most fantasy points to opposing wide receivers over the past two weeks and the third-most points on the year.

Week 13 represents a bit of a changing of the guard when it comes to my wide receiver rankings for a couple of notable rookies. I currently have Christian Watson and George Pickens ahead of veteran teammates Allen Lazard and Diontae Johnson, respectively. Lazard scored in five of his first seven contests before taking a backseat to Watson in recent outings. Watson’s three-touchdown performance in Week 10 made headlines, but he has scored three more times and added 151 total yards in two games since. I prefer both Packers to their Pittsburgh counterparts due to their ability to find the end zone. While Lazard and Watson have each scored at least five times, the Steelers’ combination of Pickens and Johnson have scored just two combined touchdowns on the year. Their upside is capped in Pittsburgh’s middling offense, making them dicey WR3 plays.

With Allen Robinson and Darnell Mooney lost for the season due to injuries, fantasy managers would have to be quite desperate to start a wideout from either the Los Angeles Rams or the Chicago Bears going forward. Neither team figures to throw the ball much, and when they do, both teams have tight ends and running backs who are capable of catching the football. The wideouts who I have ranked highest from each team are Van Jefferson and Chase Claypool. But neither is a recommended Week 13 Flex, and I do not expect that to change much anytime soon. Jefferson has scored in two of three weeks but has just 97 total yards in that stretch. Claypool’s 51-yard effort last week was his second-highest of the year and his best outing as a Bear.

You already know the deal when it comes to tight ends. There have to be awfully specific circumstances under which you would start one in the Flex. Even some of the tight ends who are classified as TE1s are far from safe in a given week. Meanwhile, you never know which random tight ends will randomly pop their way into a big day. Among the tight ends who posted top-10 fantasy finishes a week ago were John Oliver, Jelani Woods, and John Bates. If you started them last week, you should strongly consider playing the lottery. On the flip side, the trio of Cole Kmet, Gerald Everett, and Tyler Higbee combined for 45 scoreless yards. I am a glutton for punishment, so I have last week’s underperformers ranked as top-12 options again this week.