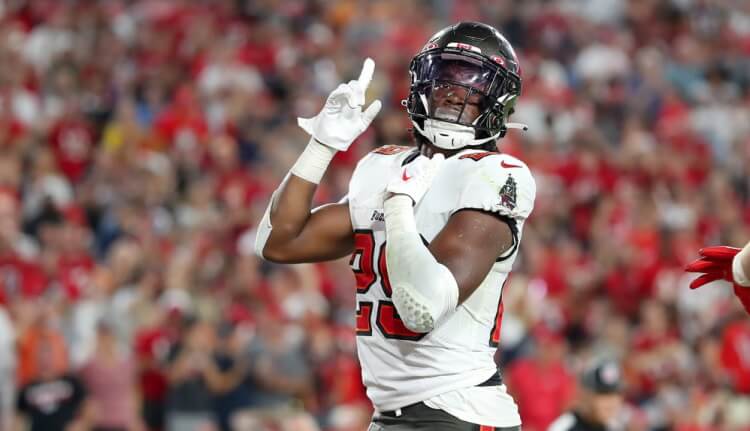 A whole 11 weeks of football are in the bag and we have plenty of the data needed to make informed decisions. It’s virtually impossible to watch every second of every game, so naturally, there are things that you miss from week to week. This article aims to name mostly under-the-radar, mid-tier, but fantasy-relevant players that are trending up or trending down. You’ll never see me mention that Justin Jefferson is trending up because that’s a headline you can read just about anywhere. You’ll also never see me slap a player like Matt Breida with a “trending down” label, because (with all due respect) who cares? But you will see me hold “star” players to a higher standard by occasionally featuring them in the trending down category. The underlying purpose of this article is to identify rising players before they become popular waiver wire adds.

The Chiefs were on the verge of finding consistency in the passing game outside of Travis Kelce. Then the wide receiver room was bit by the injury bug. JuJu Smith-Schuster was sidelined last week with a concussion that he sustained in the team’s Week 10 win against the Jaguars. After teasing us with three straight games with a touchdown (including one three-TD game), Mecole Hardman hit the IR. It’s an abominable injury for Mecole, but Andy Reid doesn’t believe it to be a season-ending injury. Especially not with the Chiefs poised to make a deep playoff run. Moore will have even more opportunities this week with Kadarius Toney being out. Toney had been trending up, but hamstrings continue to plague the early stage of his career. Look for Moore to build on his 5-63-0 line from last week. Against a beatable Rams secondary, Moore could record his first career touchdown.

I didn’t mean to have two Chiefs trending up. That’s just what happens when a unit is clicking as the Chiefs’ offense is. It is also merely a coincidence that both players are technically benefitting from a teammate’s injury. Pacheco officially took over as the team’s lead running back in Week 10 when he was afforded 16 totes against the Jaguars. He took those 16 carries for 82 yards. Apparently, less is more. This past week Pacheco received one less carry, but went for 107. It is refreshing to see the Chiefs commit to having a run game for a change. Mahomes is still throwing for 300+ a game but it has seemed easier over these last couple of games. Anytime you can take the load off your QB and still have positive plays it is a wonderful thing.
Before the switch to Pacheco, the running back room as a whole had been trending down. It was mostly McKinnon on the field, pass-protecting or trying to get involved in the passing game himself. Mix in a few empty CEH attempts and you had a recipe for a 50-yard total rushing day. Whenever Pacheco entered the game he provided a spark and looked to be the most explosive of the three backs. With Clyde Edwards-Helaire being placed on IR, this backfield is Isiah’s for the remainder of the season.

Oops, another player benefitting from an injury. This goes to show why these players must have a “next man up” mentality. When your number is called you have a limited window to prove yourself before the team looks elsewhere. Thankfully for Rachaad, he’s been earning the trust of Tom Brady and the rest of the coaching staff for a few weeks now. He was granted a few carries here and there, but he did show some rhythm with Brady in the passing attack. Starting RB Leonard Fournette sustained a hip pointer in the second half of last week’s game in Munich. Rachaad took over the reins and didn’t look back putting up a 22-105-0 line. Oddly enough he wasn’t targeted in the passing game. With a full game to get going against a putrid Browns run defense, White’s Week 12 outlook is trending in the right direction.

If you’re asking me, this Twitter post from the Bengals’ social media team is reason enough to slap Hayden Hurst with a trending down label. If you’re more of a numbers guy, I can convince you still. Remember how I was talking about opportunity and how quickly windows can close in the NFL? Well, Ja’Marr Chase has been absent for the last three weeks, but his questionable status for tomorrow seems to be trending more toward in than out. Over that three-game stretch, Hurst didn’t do much of note, at least not on the stat sheet. His only two touchdowns on the season came in Week 4 and Week 5 and he hasn’t topped 58 yards all year. With Chase set to be back in the mix, there’s no reason to believe that Hurst’s involvement can go up from here.

I’m pretty sure that Henderson was featured in the trending up section of a not-too-distant article. That was due to his success in the past when called upon and the undeniably clear path he had to volume. There was a point in time when his only competition for carries was Cam Akers, who wasn’t even in the facility! The path doesn’t get clearer than that. Henderson had a bay window he could have kept through. Instead, he found himself in the doghouse and off the roster. Quickly scooped up by the Jaguars (who have now been mentioned 3x), Henderson doesn’t figure to see much involvement going forward. Without an injury in front of him or a goal-line role, his career trajectory is trending in the wrong direction.

Let me start by saying that I am a big fan of Harris. However, I have long been hyping up my man Rhamondre Stevenson. It seems that the latter has finally done enough to supplant Harris as the 1A. The two running backs had been mostly splitting carries, with Rhamondre going loco in the games without Harris. Even after dominant performances by Stevenson, the two would go right back to splitting the work. It feels like things will be different this time around. With Harris showing an inability to stay on the field things seem to be trending up for Rhamondre going forward. I can’t envision Bill running Harris out there with volume after missing so many games to injury this season. I would expect Rhamondre to be the lead back going forward, making Harris unstartable when he returns from injury.