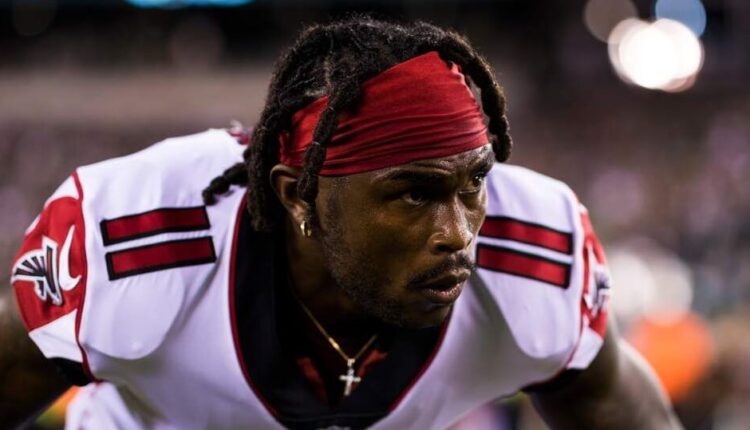 Lineup decisions are often tough calls, so here are my Week 12 flex rankings listing the top-100 PPR options at running back, wide receiver, and tight end. With a lot of injured players questionable to play, including big names like James Conner, George Kittle, and more, make sure to check back for injury updates before finalizing lineups. Also, four teams are on bye this week, so get your Chiefs, Vikings, Cardinals, and Chargers out of your lineups. Good luck with your matchups this week!

For more help getting ready for Week 12, check out our Waiver Wire Recommendations and our FAAB Guide.

Atlanta’s matchup against Carolina was last week’s highlighted game to target, and we’ll go right back to Atlanta’s matchup this week against Tampa Bay. This game has the highest over/under with Vegas projecting 51.5 total points scored. Such a projection makes sense, as the Buccaneers’ secondary has allowed the most fantasy points to opposing wide receivers this year. Julio Jones disappointed in a great matchup against the Panthers last week with just six catches for 91 yards, but he has huge upside yet again this week against Tampa Bay’s struggling corners. The only concern to monitor is Jones’s health, as he missed practice on Tuesday with a limp, likely related to the ankle injury he suffered but played through at Carolina. If Jones’s effectiveness is limited, this could mean more targets for Calvin Ridley, who is already an excellent play. Russell Gage could benefit as well, especially since he nearly had a touchdown last week were it not for his failure to secure the catch in the process of going to the ground. And with many top quarterbacks on bye or facing tough matchups this week, Matt Ryan is my fantasy QB3 for Week 12.

In theory, there should be a good catchup game script for Tampa Bay, but the big question is whether Jameis Winston will be able to take advantage. Atlanta’s defense has also been on fire since their bye, limiting the Saints and Panthers to a combined 12 points. But even a turnover-prone Winston should be able to support Mike Evans and Chris Godwin for fantasy purposes. Both receivers should receive a high target volume in a game where the Buccaneers should trail for much of the game. Cameron Brate is an interesting name at tight end as well if O.J. Howard remains benched after his bobbled pass led to an interception last week against the Saints. If Winston struggles to find time in the pocket against this suddenly lethal Falcons pass rush, Brate could again be the beneficiary with a large number of check-down targets. He’s also one of Winston’s favorite red-zone targets, so Brate has scoring upside in addition to a potentially high target volume.

In Week 11, Amari Cooper scored just 6.8 points in PPR formats against Detroit. Lingering knee and ankle injuries contributed to his lack of production against the Lions, as Cooper played only about half the snaps on offense, frequently coming on and off the field. And while Cooper is a refined route-runner with immense speed, he has struggled with press coverage throughout his career. With Darius Slay in tight shadow coverage, Cooper’s target share was limited even when he was on the field against the Lions. Unfortunately, he’ll face an even tougher matchup against Stephon Gilmore this week, a top cornerback who has allowed just a 43.5 passer rating to opposing quarterbacks when targeted this year. Cooper is still my WR21 this week, as his talent and play-making ability could still allow some catches and yards. However, depending on other wide receiver options available, it wouldn’t be crazy to bench Cooper given the limiting injuries and difficult matchup.

Ranked just one spot behind Cooper this week is John Brown at WR22. Despite logging nine catches for 137 yards and two touchdowns against Miami just a week ago, this week’s contest against Denver will be much more challenging. The Broncos have allowed the fourth-fewest fantasy points to opposing wide receivers this season, and Brown is sure to see plenty of shadow coverage from top cornerback Chris Harris Jr. Brown’s target volume (over 27 percent of Buffalo’s total targets this season) gives him an okay floor in PPR formats, but he has eclipsed 100 receiving yards just twice this year despite the high target share. Part of that is due to the fact that Josh Allen struggles with deep passes traveling beyond 20 yards of the line of scrimmage. Per Player Profiler, Allen has completed just over 26 percent of his deep passes this year, which ranks 29th among quarterbacks. While Stefon Diggs beat Harris Jr. deep for a 54-yard touchdown last week, Cousins is far more efficient than Allen in completing deep passes (ranked seventh compared to Allen at no. 29). Outside of the long score, Diggs managed just four catches for 67 yards against Harris Jr. For those without better options at wide receiver this week, Brown is still a serviceable WR2 to start, but his upside is limited.

A bonus name to avoid if possible this week is Terry McLaurin. McLaurin’s production has declined since Washington named Dwayne Haskins the starter, and shadow coverage from Darius Slay drops McLaurin even further down the rankings to WR35 this week.

For a look at how the rankings break down at each position, please check out Mick Ciallela’s Week 12 Rankings.

Fantrax was one of the fastest-growing fantasy sites of 2019 and things are only getting better! With multi-team trades, designated commissioner/league managers, and drag/drop easy click methods, Fantrax is sure to excite the serious fantasy sports fan – sign up now for a free year at Fantrax.com.