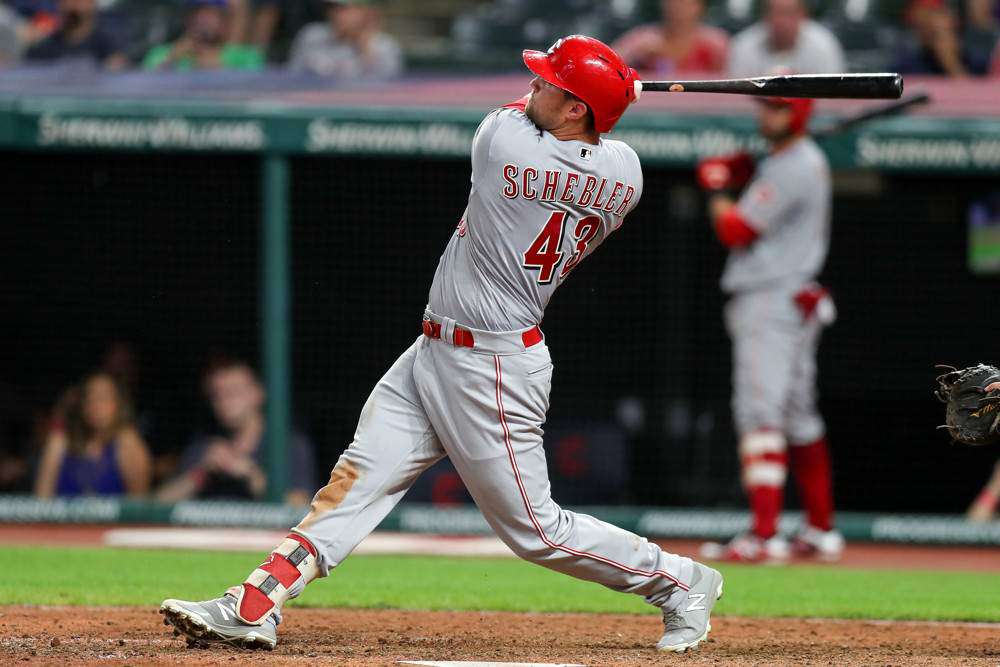 You’re almost there, don’t throw in the towel quite yet. My guess is that if you’re reading this article, you still have something to play for. Whether it’s a spot or two in your roto standings or winning a playoff matchup in head-to-head, you’re obviously here for a reason and looking for some waiver wire targets to give your team a boost. Well, you’re in luck, because I got five for you that can help your squad in a variety of ways.

If you grew up watching wrestling at the beginning of the 21st century, you’ll know exactly who I’m referring to in the title of this article. And while Scott Schebler might not be able to do the worm (or maybe he can, who knows), he’s been on fire lately, earning the nickname “Scotty Too Hotty”. Okay, maybe it’s just a nickname in my own head, but you get it, he’s hot of late.

Scott Schebler just DESTROYS this ball, launching it over the signage in right-center. 💪💪#RedsCountry

After a small skid to end August, Schebler has hit .326 with four home runs, nine RBI, and nine runs scored over the last two weeks. The power has always been there and is flaring up at the right time for fantasy owners during H2H playoffs and the final few weeks of the roto season. He’s even hit leadoff in the last five games which should boost his runs scored total down the stretch run. That is, if Joey Votto gets his rear end in gear.

There’s a reason why “man” is in Choi’s name. Over the last two weeks, Choi has been the man, hitting .324 with four home runs and 12 RBI in 37 at-bats and .375 with three dingers over the last week. All this has come while hitting mostly 3rd or 4th in the Tampa Bay lineup. This production hasn’t come out of nowhere either. Choi has been hitting the ball well all season, just without an everyday role. But thanks to the struggles of C.J. Cron and Jake Bauers, Choi has played in nine of 11 September games with Cron finding himself riding the pine more often than not.

Rest assured, there’s nothing fluky going on here. Choi is making hard contact 45.1% of the time this season after posting a 45.5% mark in limited action with the New York Yankees last season. To take it one step further, Choi’s hard contact is a rock-solid 48.0% since the beginning of August. I’ve been preaching a lot lately to find value on the waiver wire, even if the name value isn’t high. This is a prime example. If your squad needs a power boost to finish up the season, Choi is an intriguing candidate now that he has consistent playing time.

When did stealing bases become taboo? Stolen base totals have been in steady decline over the last few years and this season has been no different. We had three men steal 45 or more bases in 2017, and barring a speed barrage from one of the leaders, no one will likely eclipse 45 this season. Currently, Trea Turner leads the Majors with just 37. Why am I saying all this? To emphasize the importance of grabbing speed wherever you can get is. And right now, there’s an elite speed option sitting on the waiver wire in nearly half of Fantrax leagues and two-thirds of Yahoo Leagues.

You might not see Mondesi’s name near the top of the season leaderboard for stolen bases, but if you look over the last month, poof, there he is in second with 10 steals, trailing only Jonathan Villar’s 11. On top of the speed, he’s hitting a robust .329 with three home runs, 11 RBI, and 11 runs over the last month. Tons of speed with across the board production? Sign me up. Even if the rest of the stat line doesn’t hold up, the speed likely will, which gives Mondesi plenty of value right now, making him one of the top waiver wire targets this week.

This one surprised me. Not necessarily that Pena is pitching like this, but rather that he’s pitching like this and the fantasy world isn’t reacting accordingly. Outside of one disastrous start where he gave up seven runs to Seattle while only recording one out, Pena has pitched very well this season, especially lately. In eight starts (49 innings) since that outing, Pena has a 2.76 ERA, 1.06 WHIP, 2.2 BB/9, and 7.5 K/9. Furthermore, if you take that one horrendous start out, his season ERA would drop from 3.75 to 2.99.

That’s six shutout for him tonight. He’s been a hell of a find since Billy Eppler got him last October.

Pena is widely available in Fantrax leagues, and frankly, that needs to change. He’s been one of the best pitchers in baseball over the last month and a half and deserves to be rostered in more leagues. Pena’s next two probable matchups are no cake walks, facing Oakland and Houston on the road, but Pena pitched fairly well in his last start against each team.

No matter what time of year it is or how many games left in the season there are, a chunk of people reading this will need saves help. It’s one of the three certainties in life; Death, taxes, and fantasy baseball owners chasing saves. It’s hard to find saves help this late in the season, but Tory Lovullo and the Diamondbacks have provided us with just that. With Brad Boxberger out of the role, it was expected that Lovullo would play the matchups and use the dreaded closer by committee. While that is likely still true, there always seems to be a leader of each closer committee, and in Arizona, that leader is Hirano.

When you look at the Arizona bullpen as a whole, Hirano has been clearly the best of the bunch. Sure, T.J. McFarland has a 2.00 ERA, but that 5.25 K/9 isn’t making anyone sprint to their respective waiver wire. The best combination of low ratios and decent strikeout totals goes to Hirano with his 2.15 ERA, 1.05 WHIP, and 7.9 K/9. Not a great strikeout rate, but it will suffice. He picked up his first save of the season on Tuesday and will likely get a few more save opportunities before the season is over.