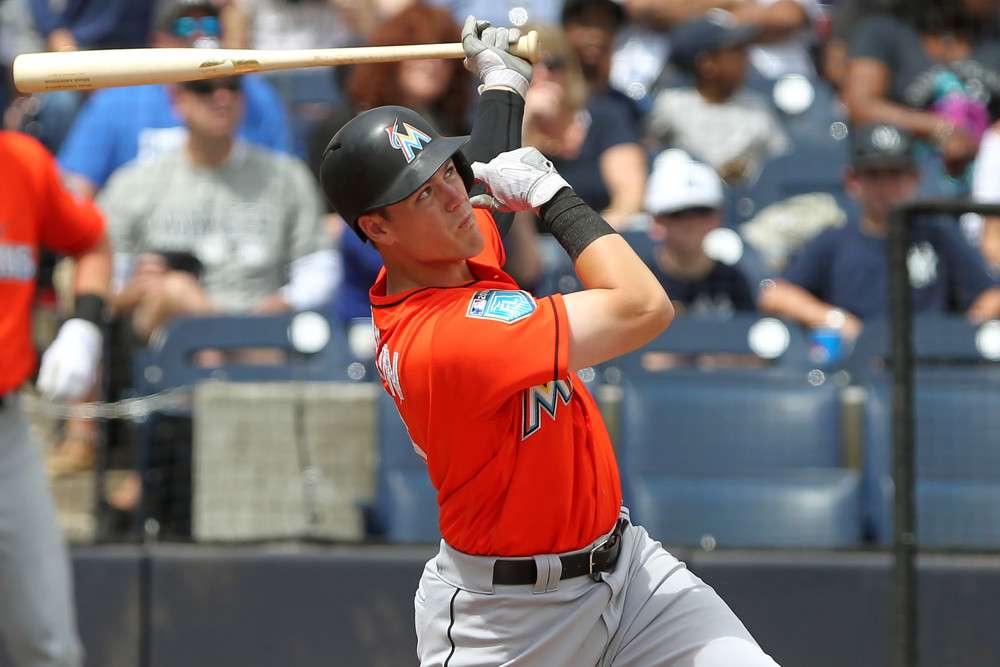 Alright, baseball season, slow down. It’s hard to believe we’re already over a week into the season. It’s been an extremely entertaining first week , too. First off, I’d like to thank the men and women that make the MLB schedule for giving my Red Sox three series in a row against the lowly Rays and Marlins to start the season. Also, can someone please check on Gabe Kapler and see what in tarnation he’s doing? I mean, I’m waiting for the Phillie Phanatic to make an appearance as a pinch runner or lefty specialist or something.

Now, onto the waiver wire. We might only be a week in but the waiver wire immediatey becomes an active spot this time of year. Many owners tend to overreact to a hot/cold start and make a rash decision because of it. That’s what you got to do sometimes though. Some might’ve looked at Davidson’s triple ding dong game on opening day and dismiss it as one great game. Which it certainly was, but Davidson very well could go on to post a 30/100 season, which will make all that passed on him wish they hadn’t. That’s just one example, but long story short, the waiver wire is important from opening day to game seven of the World Series.

Below, I’ve gone over a handful of hitters and pitchers that have started the season strong, can provide solid value moving forward, and could be sitting on your waiver wire right now. GO get them, they’re just sitting there waiting for a team to call their own. Like puppies in a pet store.

In a system with so many good pitching prospects, a guy like Joey Lucchesi often flies under the radar. The 24-year-old southpaw checked in at #7 on my top-10 Padres fantasy prospects rankings, one spot ahead of Cal Quantrill, who MLB has as their #40 overall prospect. So yeah, you could say I’m a tad high on him. Lucchesi has been averaging 90.5 mph on the gun with his heater over his first two starts, but usually sits in the 92-94 range and can ramp that up to 95-96 when needed. His change and curve, both of which sit around 80 mph, are above-average offerings that have flashed plus at times.

It looks like the Padres are going to give him a chance to stick in the rotation long-term which makes Lucchesi a very intriguing target in all leagues. He unfortunately is lined up to start in Colorado next week, so I wouldn’t advise starting him there, but now is the time to add Lucchesi while his availability is high. He has top-50 SP upside this season.

Hey, look! It’s a fantasy relevant player on the Marlins. Won’t be able to say that very often this season. Coming into this season, Anderson was my #8 prospect in the Miami system. He’s a plus defender and showing he can produce enough with the bat to be fantasy relevant. Through the first seven games, Anderson is slashing .321/.457/.500/.957 with one home run, six RBI, and six runs scored. What’s even more impressive is his 6/5 BB/K ratio so far. That likely won’t continue, but Anderson did show a solid batting eye in the minors, never striking out more than 20.6% of the time at any level. There’s zero speed to speak of here, but Anderson should contribute decently in the other four categories. If you were an unfortunate Justin Turner owner, or need some depth at third, give Anderson a look.

Down goes Knebel! Literally. Knebel went to the ground after completing a pitch and immediately grabbed at his left hamstring in obvious pain. He has an MRI scheduled today but will most likely go to the DL regardless. It’s just a matter how how severe the damage is and how long he’ll be out. In the meantime, Jacob Barnes figures to be the next man up in the Brewers bullpen. This entire bullpen has pitched well with the exception of Knebel. The rest of the pen has allowed just two earned runs in 25 innings, good for a 0.72 ERA. In a perfect world, we’d all love to see Hader as the closer. He’s been the most electric of this group, but he’s best served in a multi-use role, instead of as the closer.

That’s where Barnes factors in. While not as dominant as Hader, Barnes has been quite effective so far this season. He has appeared in four games, allowing just two hits and two walks while striking out five in six scoreless innings. The pure stuff is there for Barnes to be a serviceable closer while Knebel is on the shelf. He averages around 96 mph on his heater with a cutter (sometimes looks like a slider) in the 90-91 range. If you’ve been chasing saves so far, Barnes is a decent short-term add.

Having a player that can provide provide positional flexibility and also some decent offensive totals are the ultimate X factor. That’s why players like Eduardo Nunez and Marwin Gonzalez are coveted in the middle rounds each spring. Heck, even Hernan Perez held onto fantasy value longer than he probably should have due to his insanely diverse flexibility.

Chris Owing is never a player that will  carry your team or even be one of the ten or so best players on it. However, he falls in to that group where his offense and flexibility combine into a valuable player to have on your bench. Before a fractured finger prematurely ended his season, Owings was on a near 20/20 pace and has averaged 13 home runs and 25 steals per 600 at-bats over the last two seasons. As long as he’s starting 4-5+ times a week, Owings should be able to provide some nice back-end fantasy value while providing you depth in the outfield and at both middle infield positions.

First off, this could just be a short-term addition. Entering the season, Preston Tucker was viewed as a placeholder who was just keeping the seat warm for Ronald Acuna. Tucker posted good numbers in the minor leagues, but wasn’t able to get it going in the Major Leagues while with the Houston Astros a couple years ago. However, this year has been a much different story. Or should I say, this week.

In his first 21 at-bats, Tucker has racked up nine hits including two doubles and two home runs, one of which was off Max Scherzer. With his part Major League struggles, it would be easy to write this off as a random hot week. But Tucker’s minor league resume has always hinted that fantasy relevance wouldn’t always be so hard for him to achieve. In 2,087 minor league at-bats, Tucker hit .282 while averaging 28 home runs per every 600 at-bats. He’s not going to hold Acuna back, but he could push Nick Markakis for playing time in right, or even force a trade of Markakis. Whatever ends up happening, Tucker is worth an add right now while he’s starting and hot at the plate.

Despite being the minor league pitcher of the year in the Tampa Bay system, Chirinos wasn’t getting much pub entering this season. He finished 2017 with a 2.73 ERA, 0.97 WHIP, 1.4 BB/9, and 7.5 K/9 in 168.1 combined Double-A and Triple-A innings. Chirinos won’t blow you away but has plus control of his three-pitch arsenal and can command all three pitches very well, including an above average heater and slider.

As a Red Sox fan, Chirinos has caused me fits over the last week. In two appearances, each against Boston, the 24-year-old Chirinos combined for nine scoreless innings, allowing only four hits and one walk while striking out seven. It’s still uncertain if he’ll be a full-time starter for the Rays going forward, but there’s enough upside here to take a shot on him in deeper leagues.

Thank you for reading this week’s waiver wire report. Got a question about a player not covered here? Then follow me on Twitter @EricCross04 and ask there. Check back in next Friday for more waiver wire recommendations here on Fantrax.