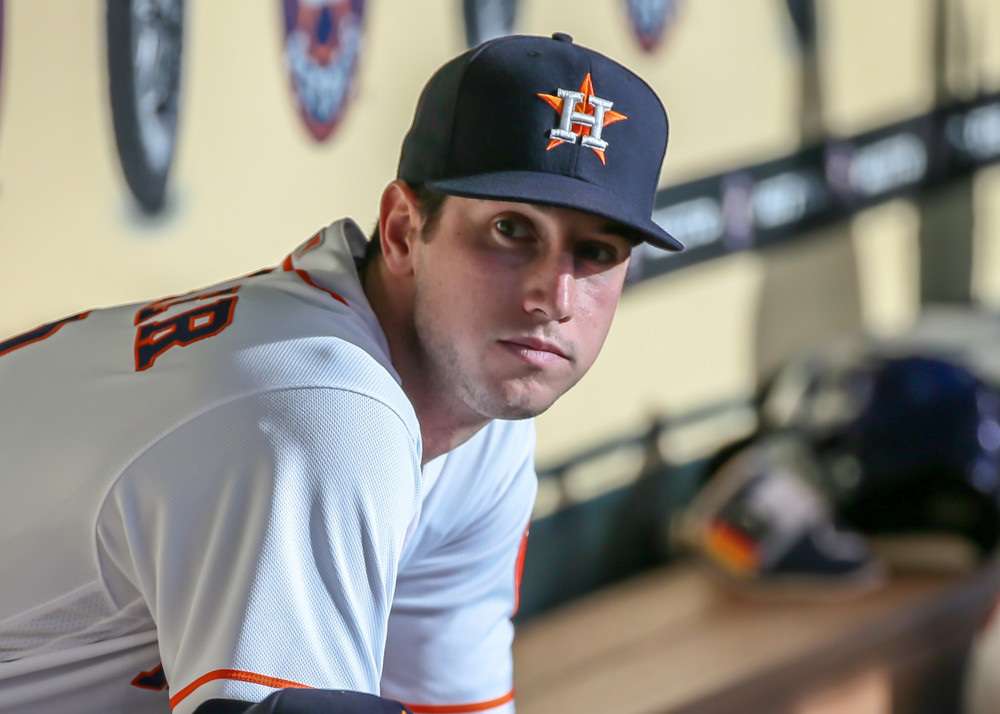 This week is all about offense. If your fantasy squad has been struggling offensively, especially in the power categories, you’ve come to the right place. Don’t worry, I threw in a couple pitchers, including a potential RP2. This week’s recommendations start with a universal top-10 prospect in Kyle Tucker that everyone knows about and a player most people had likely never heard of six months ago.

This one is about as obvious as obvious can be. So easy of a pickup, a caveman could do it. In dynasty leagues, Kyle Tucker is obviously long gone, but in redrafts there’s still a chance he could be floating around. A small chance, sure, but definitely make sure he’s not sitting on your league’s waiver wire. Tucker was slashing .306/.371/.520/.891 with 24 doubles, 14 homers, and 14 steals in 80 games before his promotion to Houston. His plus hit tool, power, and speed are immediately tantalizing in redraft formats and could be a real difference maker down the stretch.

Another difference maker on the other side of the ball that goes by the name Walker Buehler is returning to the Dodgers rotation today. Here’s your friendly reminder to make sure he’s not sitting on your waiver wire.

This isn’t the first time Niko Goodrum has been included in this article. He made an appearance a month or two ago during his emergence in May which put him squarely on the fantasy radar. It’s safe to say that the casual fan had never heard of Goodrum before this season, but with all the injuries Detroit has suffered, they were forced to give Goodrum more at-bats than initially planned.

Detroit has stuck with him since then, but after hitting .171 in June, most owners that added him in May tossed him back into the player pool without thinking twice about it. I’ll even admit, I was one of them. However, since the calendar turned to July, Goodrum has been a whole new man. In 46 at-bats, he’s hitting .419 with one homer, one steal, six RBI, and eight runs. Sure, a .545 BABIP might have  a lot to do with that, but even with regression, Goodrum still holds solid value going forward as long as he continues to play regularly. The fact that he’s eligible at several positions doesn’t hurt either.

If C.J. Cron was on a bigger market team like Boston, Philadelphia, etc., he’d be getting a lot more recognition this season. The 28-year-old hulking first baseman is slashing .253/.326/.475/.801 and is on pace to finish with 32 home runs, 81 RBI, and 76 runs scored. Those numbers are right in the Josh Bell/Logan Morrison range from last season, in which both men ended the season as Top-100 players.

The @RaysBaseball were trailing when C.J. Cron stepped to the plate. They are no longer trailing. Watch the final innings of action this afternoon live on FOX Sports Sun and FOX Sports Go! #RaysUp pic.twitter.com/MHkaics8lf

Some fantasy owners have bought into Cron, while others have been a tad hesitant. I can see why, too. Cron has often gone on hot streaks in the past and crashed back to earth just as quickly. But those were usually 100-150 at-bat stretches, not the 320 Cron has logged so far. Like with Goodrum, Cron stunk up the place in June, but has bounced back in a big way in July, hitting .464 with two homers in 28 at-bats. Personally, I’m a believer in what Cron is doing this season. He’s making more hard contact and hitting more balls in the air than he ever has in his career. But the question is, do you buy in too?

Hot streak alert! I’ll never sit here and tell you that Maikel Franco is an All-Star or someone that will help lead you to a fantasy championship. He’s too streaky for those proclamations to be true. But that’s also how he can help you for short bursts at a time; He’s streaky. If you time it right and grab Franco at the beginning of a hot streak, he can carry your lineup for a few weeks and help you win some matchups if you play in H2H formats.

Over the last week, Franco is hitting .391 with a pair of home runs and is actually on a 21 HR/79 RBI pace, so it’s not like he’s been terrible this season. If Franco is available in your league, it’s worth adding him to ride out this hot streak for however long it may last.

May I interest you in a player on a six-game hitting streak with home runs in four of those six games? How about a player hitting .302 with eight home runs, 21 RBI, and 17 runs scored over the last month? Well, you’re in luck, because it’s the same person. Now isn’t that convenient? Piscotty wasn’t on many radars at the end of May. At that time, he was sitting at a paltry .227 with a trio of home runs and 19 RBI.

June and July have been another story entirely. In 122 at-bats since June 1st, Piscotty is hitting .303 with eight home runs, 24 RBI, and 20 runs. This offensive resurgence0 hasn’t been a product of an inflated BABIP either. Piscotty has made minor improvements this season, mainly making more hard contact, using the whole field better, and cutting back on the ground balls.

If you can sit here and tell me who will be the closer of this Giants team at the end of the season, pack your bags and hop on a plane to Las Vegas as soon as possible. Take me with you too, I’d love to earn some extra money off of you. The Giants have had more “closers” than I can count, but it appears they might finally have found someone that could still be their closer two weeks from now and potentially for the rest of the season, in Will Smith.

This particular Will Smith might not reside in Bel Air, but the big southpaw is enjoying the best season of his career with a stellar 0.95 ERA, 0.67 WHIP, and 12.1 K/9. His walk rate is also lower than it has been in any one season in his career. The last three save opportunities have gone Smith’s way and he’s converted all three with the greatest of ease. Expect those saves to continue going his way.

During his final five seasons in Washington from 2011 to 2015, Jordan Zimmermann was one of the steadiest and most reliable starting pitchers in baseball. Then in the 2015/2016 offseason, he took his talents to Detroit and turned into one of the worst pitchers in baseball, especially last season when he finished with a 6.08 ERA, 1.55 WHIP, and 5.8 BB/9. You know he must have turned it around in a big way this season to be included here. I mean, would I recommend a pitcher with a 6.00+ ERA?

Through 12 starts, Zimmermann has recorded a 3.71 ERA, 1.13 WHIP, 1.6 BB/9, and 8.7 K/9 which is his highest strikeout rate since his rookie season in 2009. So, what’s the difference? Well, he’s throwing his plus slider more and his fastball less. That might seem minor, but Zimmermann had one of the worst fastballs in the Majors in 2017 according to Fangraph’s pitch values. Not only is he throwing his fastball less, he’s commanding the pitch much better, making it less of a detriment to his arsenal.