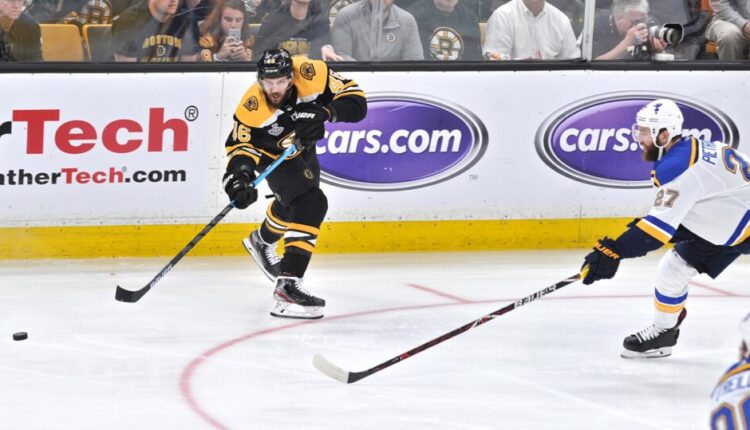 Most of the players that got off to surprising starts are likely to have been picked up by now. However, there are a few veterans proving they have more to give, along with a rookie who made an impact in his first game. There’s plenty of talent to find on the fantasy hockey waiver wire.

C David Krejci, BOS (49% owned): The long-tenured Bruins centerman recently returned from an upper-body injury. He registered a goal and an assist while logging 4:57 of power-play time. It’s no surprise that his goal was scored with the man advantage given the opportunity he had. He likely won’t be on the waiver wire for long, as owners will soon realize he’s back in the lineup.

RW Alex Tuch, VGK (48%): Tuch has missed the opening 13 contests with an undisclosed injury. He appears to be ready to re-join the team this week, possibly right away. He broke out for 20 goals and 52 assists last season and could be a difference-maker for the Golden Knights again. It will likely take a couple of games to shake the rust off, but with Mark Stone and Reilly Smith ahead of him on the depth chart, playing on the third line may make it easier to get him up to speed.

RW Joel Armia, MTL (47%): Armia has been fairly productive for Montreal, notching six goals and a pair of assists throughout nine games. Playing on the second line and second power-play unit, it looks as if he’s found another gear to his game. While he’s unlikely to keep his near point-per-game pace, he should easily surpass his career-high 29 point total. Plus he throws his body around too, laying out 24 hits.

LW Josh Bailey, NYI (45%): The often-overlooked Islander continues to be productive. He’s collected nine points in 11 games thus far. While the Islanders take a more defensive approach under Coach Barry Trotz, Bailey is being given every opportunity to succeed. He’s playing on the top line, as well as the top power-play unit, so he can be considered a reliable secondary scorer for your fantasy team.

C Adam Henrique, ANA (41%): If you’re in need of goals specifically, Henrique is riding a three-game goal streak. He’s playing on a line with Rickard Rakell and Jakob Silfverberg at both even strength and on the power play. He’s chipping in on other categories, with a plus-12 rating, 30 shots on goal, and 17 hits.

RW Brandon Tanev, PIT (32%): If you could use an uptick in hits, while simultaneously collecting modest point production, Tanev fits the bill. He’s been moved around the Penguins depth chart, but still generated seven points in 13 outings. Though his 51 hits are his biggest draw if your league credits them.

C Nick Bonino, NSH (13%): Almost everyone in Nashville is producing, yet Bonino is owned is such a small percentage of leagues. Through 12 games he has six goals and four assists, including a hat trick performance over the Blackhawks Tuesday night. He’s been consistent too, having never gone more than two games without picking up a point.

D Jake McCabe, BUF (16%): McCabe isn’t lighting it up offensively, but his four points aren’t bad either. He brings value with his 28 hits and 34 blocks. He’s playing on the top pairing with Rasmus Ristolainen, averaging 21:10 of ice time per game.

D Adam Pelech, NYI (16%): In similar fashion to McCabe, Pelech also plays a more defensive-minded game, while slotted on his team’s top pairing. Pelech has just two assists, but should only be targeted on the waiver wire if you find his 29 hits and 32 blocks to be beneficial.

D Josh Mahura, ANA (8%): The rookie defenseman was called up from AHL San Diego due to some injuries on Anaheim’s blue line. Mahura had no points in six games in the AHL but racked up three helpers in Tuesday’s win over the Jets. Of course, he can’t sustain that pace, but he could be worth a flier in case he can provide some secondary offense.

G Ryan Miller, ANA (10%): The 39-year-old netminder is still shutting down the opposition. He has a 3-0-0 record, with a 2.10 GAA and .929 save percentage — placing him fifth and eighth respectively in the league. Miller is getting the job done against quality teams too, defeating Columbus, Carolina, and Colorado. Anaheim’s upcoming six contests are at home, where they hold a 5-1-0 record.

Also check out last week’s waiver wire picks to see if any of those players are still available.