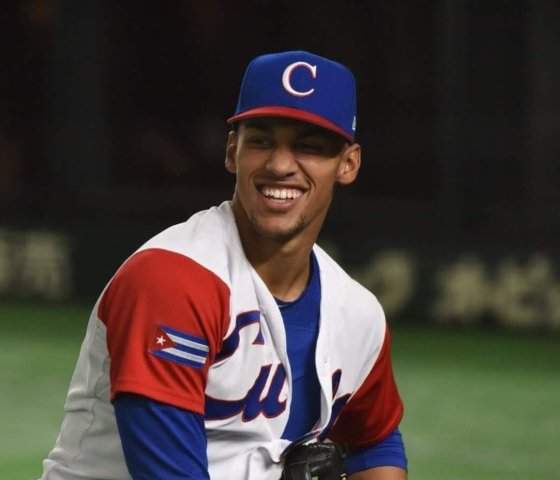 It’s about damn time. It wasn’t even a month and a half ago when Victor Mesa and his baby bro, Victor Mesa Jr. were declared free agents by Major League Baseball. But right after they became free agents and the rumor mill pumped out potential landing spots, nothing. Echoing silence. Sure, you’d hear the occasional murmur about the Baltimore Orioles and the Miami Marlins being the front runners, but for the most part, it was just that annoying waiting game which is always a pain in the ass.

Then finally, after the longest 5-6 week stretch in the history of mankind, the Mesa brothers as expected signed with the Miami Marlins. The Marlins really needed this signing to beef up their farm system and give fans in Southern Florida something to look forward to. With Miami’s population being approximately 70% Latino and 50% Cuban-American, the signing of the Mesa brothers was a great investment by the Marlins. It helps that both Mesa brothers are great ball players, especially the one with two Victors in his name. So nice, you got to say it twice.

Tools are on the 20-80 scouting scale (Current/future projection)

Depending on where you look, there’s a wide spectrum of opinions on Mesa’s hit tool. Me? I’m a fan. Mesa starts with a balanced setup, slightly open towards third base, without a ton of pre-pitch movement. Back leg load and forward weight transfer are fluid, and coupled with a clean swing path and plus bat speed, generates a ton of hard contact.

He doesn’t work many walks, but Mesa has strong plate coverage and doesn’t strike out often. Granted, that 12.3% strikeout rate is bound to climb some against more advanced and more talented pitching than he saw in the CNS, but with his plate coverage and contact skills, I don’t expect that to rise past 20% or so.

Offensively, power is the lagging tool here with Mesa. He only managed 10 home runs in 312 CNS games, but did add in 43 doubles and 17 triples. But like always, any numbers, especially numbers from foreign leagues, need to be taken with a grain of salt. If you focus on the swing and raw power, there’s the upside for more power than Mesa showed in Cuba. With some added loft, 15-20 home runs should be expected.

Overall, we’re looking at a strong offensive outfielder with the upside to hit .280/.340/.450 with 15 home runs and 30 steals while hitting near the top of the lineup.

Out of the plethora of tools for Mesa, his speed is what has me the most excited. Mesa swiped 74 bags in 312 games while getting caught 26 times. That’s some easy math right there. A 74% success rate, while not elite, is promising for a player as raw as Mesa. Sure, he’s been playing baseball competitively in the Cuban National Series, but now he can get year round work in here in the United States and really strengthen his base-stealing skills and pitcher reads. With some continued development, 30-plus steals annually is realistic.

The plus speed we discussed above isn’t just put to good use on the bases. Mesa is able to cover a lot of ground in the outfield and track balls down that most cannot. His path to the ball could still use some refinement, but that should only improve with reps in the upper minors in 2019 and beyond. He projects as a center fielder, but has the athleticism and strong throwing arm to be an above-average defender at any of the three outfield spots.

Immediately upon signing, Mesa vaulted to the top of the prospect rankings for a lackluster Miami Marlins farm system. That’s no slight on Mesa though, who is already one of the top-50 prospects in the game right now, and maybe even top-25. The upside is an All-Star caliber outfielder that is above-average on both sides of the ball. Due to his advanced profile and vast experience in the CNS, it shouldn’t take long for Mesa to reach the Major Leagues. Maybe not in 2019, but a 2020 ETA is a very reasonable expectation.

Those in dynasty leagues should covet the 22-year-old Cuban. His ability to contribute across the board should make him a top-50 or so fantasy asset in time. For all of you that will need to acquire him by way of your First-Year Player Draft, a top-5 pick will need to be used to add him to your dynasty squad. The only two I would rank ahead of him right now for FYPDs are Nolan Gorman and likely Jarred Kelenic. After them, he’s right there with the likes of Jonathan India, Nick Madrigal, Joey Bart, and Casey Mize.

Eric Cross is the lead MLB writer and prospect analyst here on FantraxHQ and has been with the site since March 2017. He is also a member of the Fantasy Sports Writers Association (FSWA). For more from Eric, check out his author page and follow him on Twitter @EricCross04.