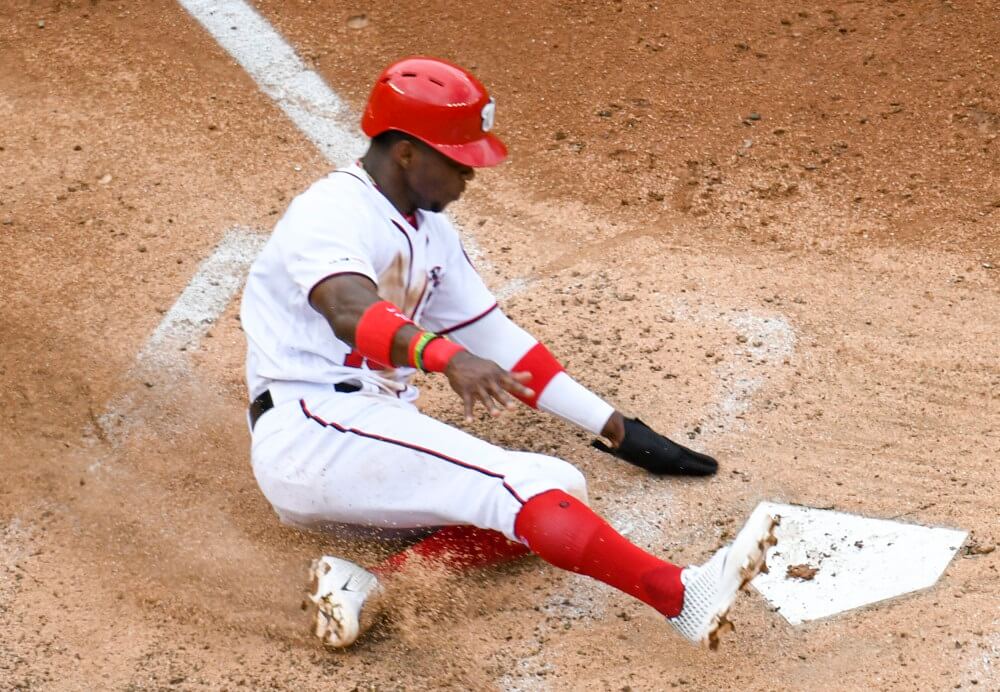 Victor Robles was once billed as a top prospect in baseball. With a plus hit tool, 70-grade speed, and average power, Robles was a prospect that many considered “can’t miss.” His Major League numbers have been far from exciting though as Robles Fantasy value has taken a dip. A solid, but not spectacular 2019 was followed by a disappointing 2020. The question remains, can Robles be an elite Fantasy asset?

Victor Robles in 2020: What Happened?

It was an interesting 2020 for Victor Robles, who got a late start to summer camp thanks to exposure to COVID-19. He never had the virus, but it kept him out until just under a week before Opening Day. Robles also arrived at camp nearly 20 pounds heavier, which had a significant effect on his performance, in my opinion. In a crazy season of weight gain, COVID exposure, and poor performance, Victor Robles regressed significantly and found himself on the bench toward the end of the season. What should you expect from him in 2021 and beyond? Let’s dive in!

After a 2019 season where Victor Robles posted solid numbers, including 17 home runs and 28 stolen bases, 2020 was a different story. In 189 plate appearances, Robles slashed .220/.293/.315 with just nine extra-base hits. The four stolen bases helped, but only three home runs and a combined 35 runs plus RBI led Robles to be the 737th ranked player in standard 5×5 leagues. With an ADP of 75, it is safe to say; Victor Robles was a bust for Fantasy owners in 2020. What does his profile suggest we should expect moving forward?

Between 2019 and 2020, Robles averaged 3.89 plate appearances per game despite spending much of his time hitting in the nine-hole. Playing in over 93 percent of the team’s games during the two seasons is also encouraging. Moving forward, Robles feels like a safe playing time bet, and if he can move up in the lineup, he could provide even more plate appearances.

Victor Robles notably dropped his ground ball rate by five percentage points and increased his line drive rate by seven from 2019 to 2020. These are worth noting because, naturally, those stats should lead to better production. A higher line drive rate and a high sprint speed have a strong correlation with a high BABIP. Instead, Robles saw his BABIP drop from .310 in 2019 to .298. 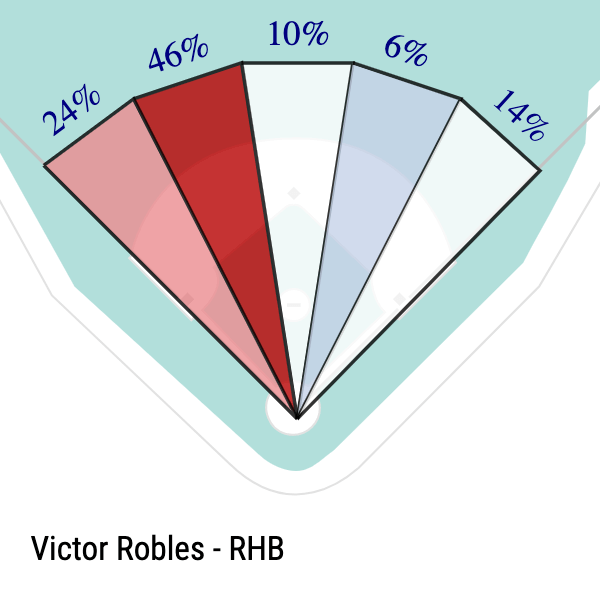 Robles also began to pull the ball more this season, at a rate of 50 percent. For someone with fringe power like Robles, more pulled, hard-hit balls naturally should lead to better power output. But that was not the case. There are encouraging signs in Robles’ batted ball profile, but the results were not there. The problems come in a different segment of Robles’ profile that we will discuss next.

On pitches in the zone, Robles swung less(Z-Swing%), but made significantly less contact(Z-Contact%). His 2019 number of 86.9 percent was healthy, but the six percent drop in 2020 is concerning. This led to Robles’ overall contact percentage to drop nearly five percent. Also, Robles’ 12.8 swinging strike percentage is a big reason why there was a large jump in his strikeout rate(22.7%-28%). Overall, Victor Robles’ plate discipline metrics do give grounds for concern moving forward.

Remember before the 2020 season, when everyone blamed Victor Robles’ low exit velocity on his bunts? Well, it did not get any better in 2020. Robles saw his average exit velocity drop to 82.2 mph, good for third-worst in baseball. On line drives and fly balls, Robles had the second-worst at 85.7 mph. Robles also had one of the league’s worst barrel rates at 1.7 percent. Just one out of every 100 plate appearances led to a barrel. Considering the high correlation between barrel rate and home runs, it is very concerning for Robles future home run output. His hard-hit rate of 22.9 percent in 2020 was right in line with his 2019 number, which does not indicate growth.

One positive is, Robles had a max exit velocity of 109.2 mph, which is in the middle of the pack. On the flip side, his max home run distance this season was just 385 feet. Given Robles’ 28 home runs in 1699 career Minor League plate appearances, his 17 in 2019 may be an outlier for his career. Naturally, you would think adding some weight to his frame would lead to higher power output, but that was not the case. With the numbers in his profile, Robles can safely be projected for ten home runs moving forward, with a possibility to hit 15 if he can get back on track.

Scouts billed Victor Robles as a 70-grade runner as a prospect and for a good reason. He posted elite sprint speeds that led to 129 stolen bases in 384 career Minor League games. In 2019, Robles stole 28 while having one of the league’s best sprint speeds at 29.3 feet per second. The 20-pound weight gain could be a reason for the decline in 2020, as Robles’s sprint speed dropped to 28 feet per second.

While it may not seem noticeable, Robles went from the fastest player in the league in 2017, to now just the 95th fastest. It is concerning that Robles is declining in speed at only 23 years old. It is hard to say whether he just came into the season out of shape after quarantine or not. But with steals being a massive part of Robles game, it is hard to draft him banking on the high stolen base upside to return.

Victor Robles hit very well against left-handed pitching in 2020. That was not the case in 2019, as he had a slightly higher batting average against righties. Robles has minimal home run power against LHP, though, as he has just three home runs against lefties between 2019 and 2020.

On the flip side, Robles saw his batting average against RHP drop from .257 in 2019 to .180 in 2020. There is not a ton in the data to explain why he struggled drastically against right-handed pitching, but it is worth monitoring in 2021.

Several of Victor Robles’ statcast numbers have been previously discussed, but as you can see in the picture, it was terrible across the board. His exit velocity, hard-hit rate, and barrel percentage were among the worst in the league. While Robles’ slash line was not great, the expected numbers were worse. His xBA of .202 was lower than his BA, and his xSLG was one of the worst in the game at .280. His xwOBA of .254 was also lower than his actual wOBA of .268. 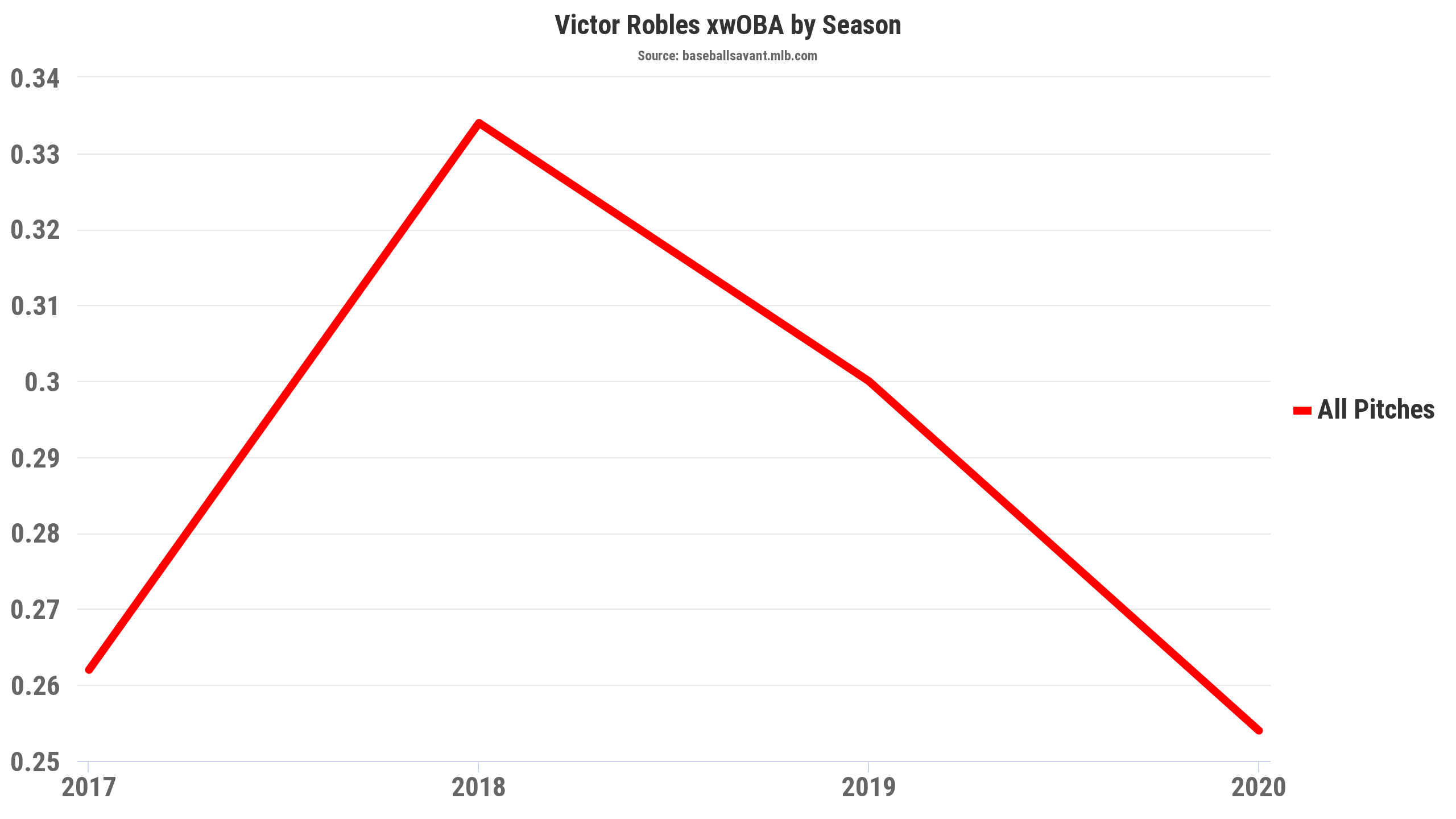 Well, that’s enough negatives; let’s move to a positive in his profile. Even though Robles’ sprint speed declined, it was still 80th percentile. His 90-foot splits were even better as he ranked 48th in all of baseball. At 23 years old, it is hard to imagine a decline in speed this early. The weight gain probably factored in, so it will be interesting to see what kind of shape Robles is in next season.

Victor Robles remains one of the more challenging players to evaluate for 2021. I apologize if the article came across negative. I will admit it was hard to find any encouraging signs in Robles’ profile. As a career .300 hitter in the Minors, it is surprising to see Victor Robles’ steady decline in batting average. Still young at 23 years old, there is still plenty of time for him to figure it out. But based on all the underlying data, I will say, Robles is one of the more challenging players to project for next season.

A lot will depend on his ADP, whether I would recommend drafting Victor Robles in 2021. Many Fantasy owners feel the need for speed, so it is possible he falls in the Oscar Mercado 2020 range around pick 120. Over a full season, it is safe to project Robles to hit in the .240-.250 range with ten-to-15 home runs. I also expect Robles to run more than he did in 2020 and produce at least 20 stolen bases. There is also the chance that Robles puts it all together and is the player everyone has wanted him to be. But that is a risk you will have to decide if it is worth taking.

Again, much like 2021, it is hard to project the long term value of Victor Robles. It was not long ago when Robles was consistently ranked in the top 50 of most dynasty lists. Some lists even had him as high as 30 overall. I am much more confident that Robles will return to form the long term than I am in 2021. He will begin the 2021 season at just 23 years old and has plenty of development time left.

In Eric Cross’s updated dynasty rankings, Victor Robles is ranked at 98 overall. It feels like a safe spot for a player with his potential. If you own him in dynasty leagues, now is not the time to sell. If you are buying, it could be a great time to acquire him cheaply as the cost may never be lower.

If you enjoyed this article, be sure to check out all our offseason content to prepare for next season!