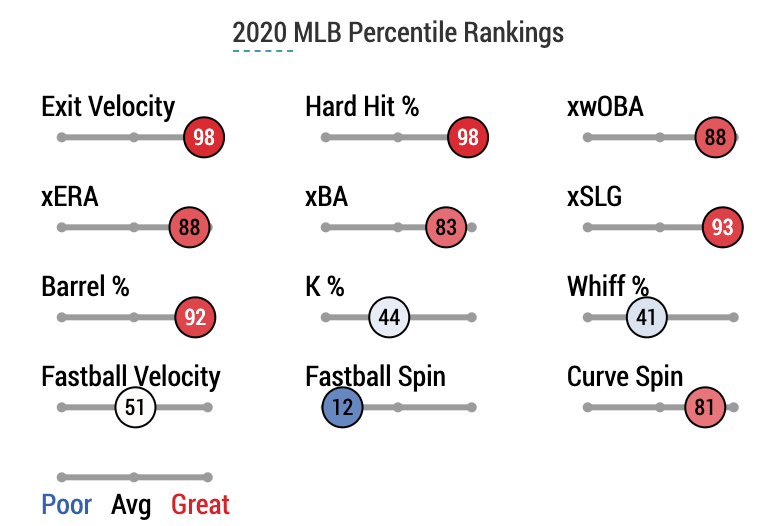 If you missed the first two installments of the series, you can find them here:
Using Statcast To Evaluate Hitters

While stats like Exit Velocity, Hard-Hit Rate, and Barrel Percentage can help evaluate a hitter, they are not nearly as strong of indicators when evaluating a pitcher. Pitchers are complex, and so many things go into evaluating a pitcher. Let’s take often use statcast metrics and look into their usefulness and see if they are descriptive of a pitcher’s ERA. 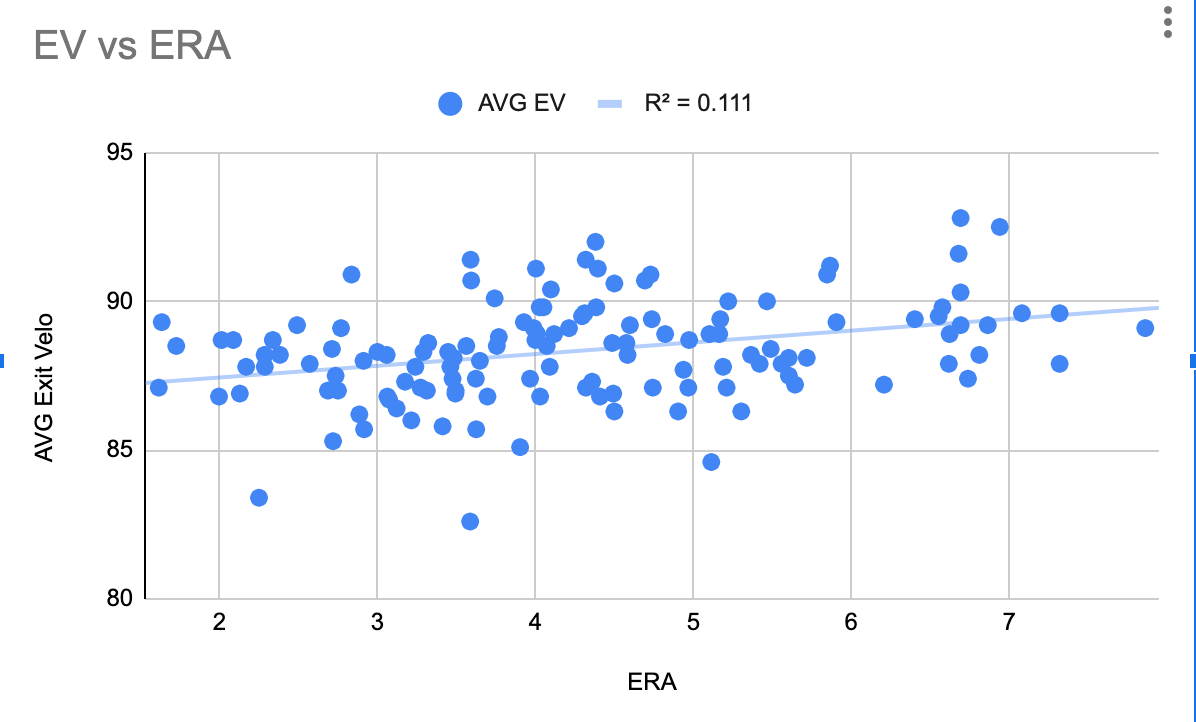 Based on the data, there is not a strong correlation here. You will always find outliers. The one outlier you see below a three ERA is Gerrit Cole. 90 percent of pitchers had a lower average exit velocity than Cole, yet he still pitched to a 2.84 ERA. Shane Bieber was in a similar situation in 2019 and still had a strong season. The reality is, average exit velocity is not always a strong indicator of ERA or all that useful evaluating a pitcher. 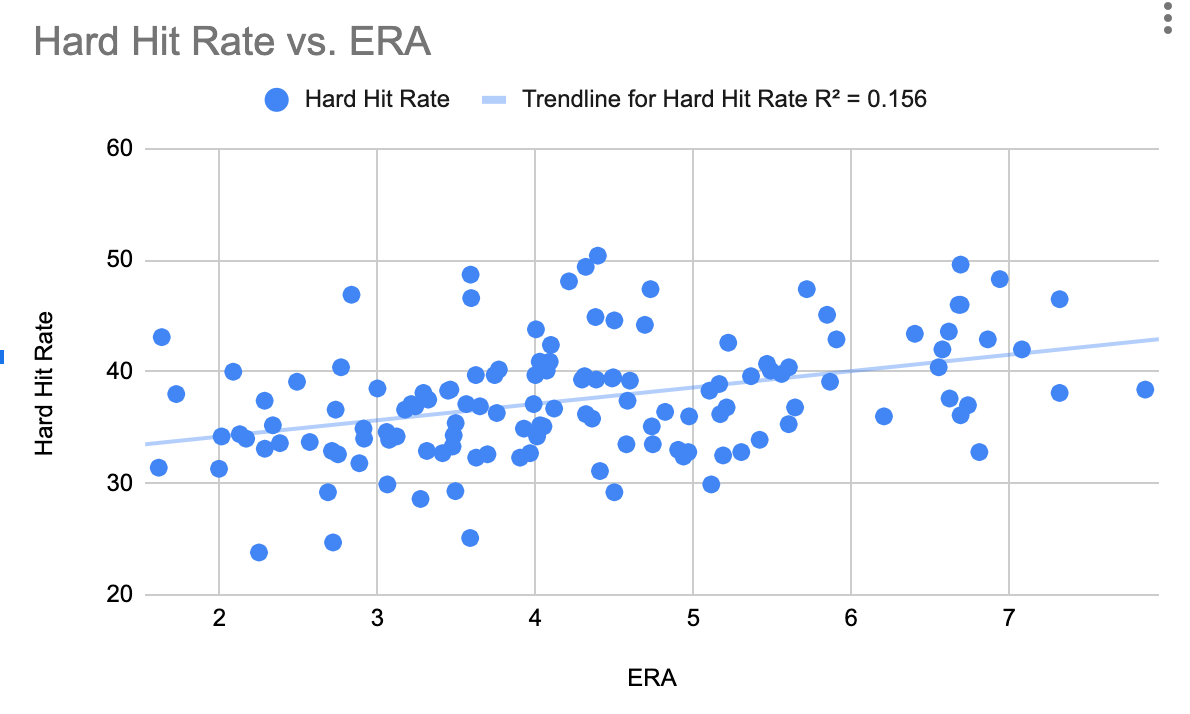 Hard hit rate actually has a slightly stronger correlation with ERA than average exit velocity. Among qualified starters, Max Fried has the lowest hard hit rate allowed, which is encouraging. But does it correlate well with a pitcher’s performance?

A batted ball classified as hard hit is one that is hit 95 mph of harder. Har hit rate, therefore, is the percentage of batted balls allowed that are hit 95 mph or harder. Naturally, if a pitcher can limit batters making hard contact, they are likely to limit home runs and other base hits.

Hard Hit rate is useful, but I would still look past it when evaluating a pitcher. You will likely always have outliers of guys who naturally allow a lot of hard contact, but make up for it in other areas. There are better statcast metrics to use to evaluate a pitcher.

Ah, now we are getting somewhere. Barrel rate is a great metric to use when evaluating a hitter. It has one of the strongest correlations with home run percentage with hitters. Therefore it is also useful for pitchers. If a pitcher is giving up a large number of barrels, they are likely giving up a healthy amount of home runs, therefore inflating their ERA.

Max Fried allowed just five barreled balls in 2020 for a 3.3 percent barrel rate. He also allowed just two home runs during the 2020 regular season. Fried also posted a 2.25 ERA. Look at the correlation in the chart below. This is the strongest statcast metric if you are looking at the correlation in ERA. So, if you want to use a statcast batted ball metric to evaluate a pitcher, it would be barrel rate. 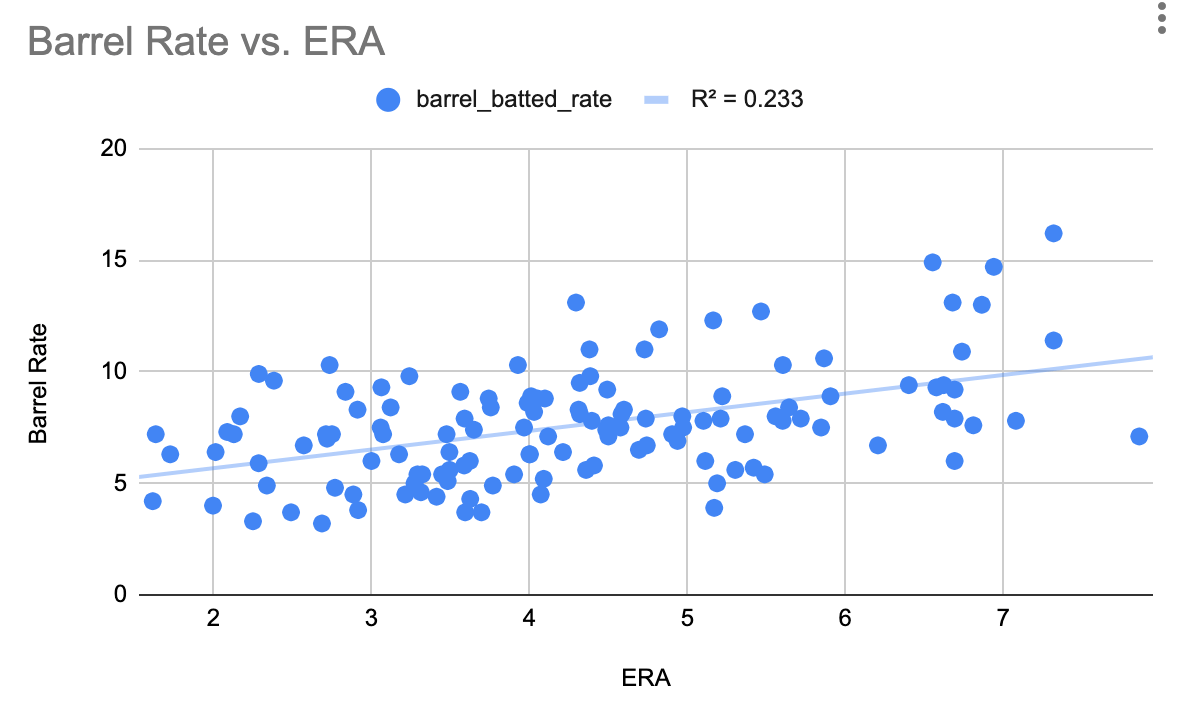 There are several other useful tools when evaluating a pitcher on Baseball Savant. Statcast does a great job of tracking pitch velocity and movement. The pitch tracker, which is pictured below, is something I look at often. There are three things I love looking at here, which are; usage percent, velocity(MPH), and spin rate. You can see if a player saw increased velocity or spin rate from year to year or if a pitcher started using a certain pitch more often.

For this picture, I have switched over to Trevor Bauer’s profile. He made some notable changes in his pitch profile. First, you will notice that Bauer used a cutter and a slider significantly more in 2020 than in 2019. He also almost eliminated his changeup.

Interestingly enough, he also saw his four-seam fastball lose one mph of velocity on average. This typically means bad things, but in Bauer’s case, it worked out well for him. This is likely due to an increased spin rate, which I noted was important to look at. It is almost unheard of for someone to gain nearly 300 RPM on a fastball, but Bauer did. Bring all your takes about pine tar and other things, but there were plenty of other pitchers that could be suspect in using substances. But that is not what this article is about. The Statcast pitch tracking feature is a great tool to use when evaluating pitchers.

Another great tool to use on Baseball Savant is a pitcher’s movement chart. Here you can find both the vertical and horizontal inches of movement on each pitch. You can also see the percent of break versus the league average. Take a look at Bauer’s slider, which gets over double the league average horizontal movement. It also has above average vertical movement, which makes it a deadly pitch. His four-seamer also averaged the most vertical movement of any pitcher in baseball. Looking at pitch movement can be extremely useful to look at a pitchers strikeout potential.

The search feature on baseball savant is AWESOME! It is extremely detailed and you can find results from endless search possibilities. For more details on how to use the search feature, you should check out a great video series titled “Baseball Savant Tutorial” created by Daren Willman and Alex Fast.

I bring up the search feature for one reason, CSW. Called Strike plus Whiffs (CSW) is an extremely useful metric created by Alex Fast and Nick Pollack at Pitcher List. This metric factors in the percentage of called strike and whiffs that a pitcher gets and is extremely helpful when evaluating a pitcher. You can find CSW for individual games in the Baseball Savant game feed.

But for season-long results, here is what you need to do. Go to the search feature at the top of the page. Be sure the player type is pitcher and go to pitch results. From there you need to check six boxes; called strike, missed bunt, foul tip, swinging pitchout, swinging strike, and swinging strike (Blocked). Go to the bottom and sort by pitch%. Click search and there you have it, CSW for every pitcher based on the season of your choice. You can also filter out pitchers by changing the minimum numbers of total pitches. 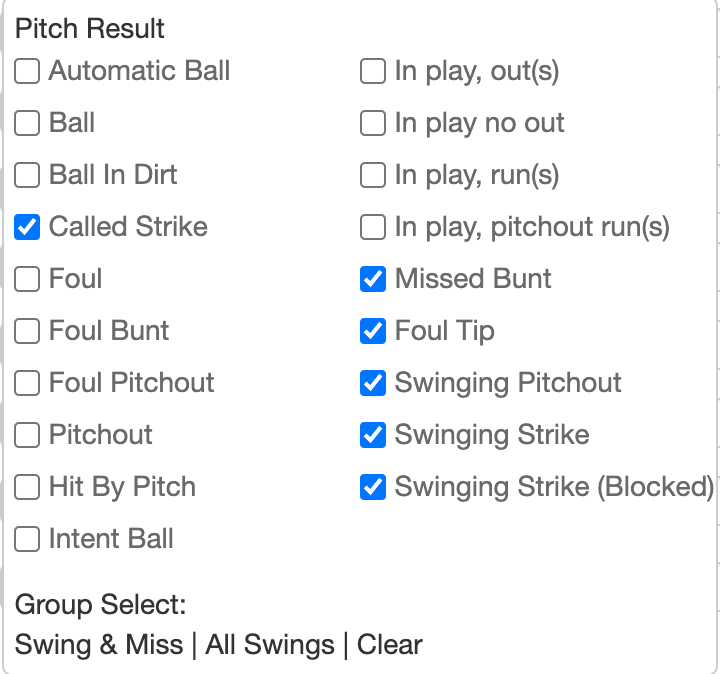 CSW has become one of my favorite metrics to use when evaluating a pitcher because it shows their ability to get strikes and has a strong correlation with strikeout percentage. While it is not perfect, it is extremely strong! Not every called strike or whiff is a strikeout, but it is a great metric to use for evaluating a pitcher’s strikeout potential.

The reality is statcast may not always be the most useful thing to use when evaluating a pitcher. But, this gives you an idea of what is useful and what is not on Baseball Savant. Next week, we will take a trip over to Fangraphs and look at what I believe are the best metrics to use when evaluating a pitcher. For now, you should check out “2020 Breakout Pitchers” our staff at FantraxHQ are buying into for 2021.

The 2020 MLB season is not even over but we are already preparing for next year. Keep track of all our 2020-21 MLB Offseason Analysis.