Underperforming Starting Pitchers To Target In 2022 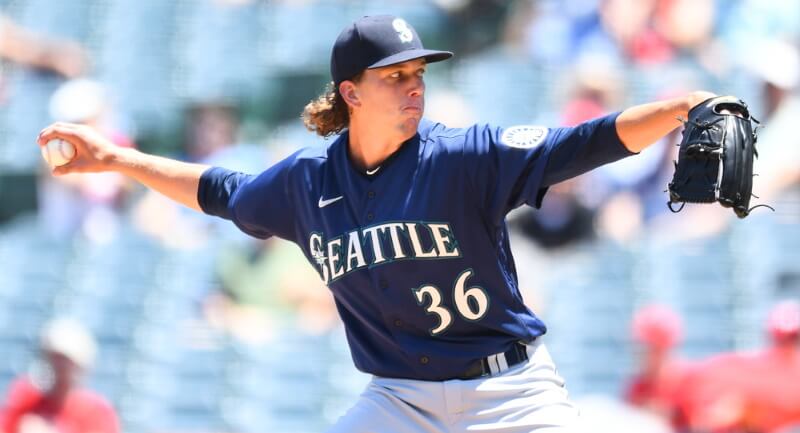 Did a starting pitcher on your Fantasy Baseball team underperform this year and leave you heartbroken? There is a strong chance this was the case. I drafted Aaron Nola 16th overall in TGFBI. That has been a massive disappointment for my team. There are plenty of starting pitchers that failed to live up to their draft cost for various reasons, but don’t completely write them off for 2022.

This article will discuss various starting pitchers who have struggled this year, but underlying metrics suggest they underperformed. Will these arms rebound next year and be draft day bargains? Let’s take a look.

It is easy to say Aaron Nola has underperformed this season, especially given his ADP of 22.65 in the spring, according to NFBC. On the surface, a 4.48 ERA over 168.2 innings pitched seems pretty poor. That’s because it is. Dig a little deeper, and the numbers under the hood look much better.

Nola’s 30.3 percent strikeout rate is the highest of his career outside of the shortened 2020 season. Nola has also improved his walk rate this season and has a career-low 5.2 percent rate. While those numbers have improved this year, the overall results have not been there for Nola.

Part of the reason is that Nola has had some lousy luck swing his way. His BABIP this year is .307, significantly higher than the .274 number he posted between 2018 and 2020. His strand rate is also meager. Over the three-season span from 2018 to 2020, Nola’s strand rate was 78.4 percent. This year, that number has dropped over ten percentage points.

Due to the bad luck factors against Nola, his FIP, xFIP, and SIERA all remained very low at 3.31, 3.29, 3.41, respectively. These are all encouraging signs for a Nola rebound in 2022. I have waited patiently all season for the rebound, but surprisingly it has not come. Since August, Nola has a 4.94 ERA despite having both a FIP and xFIP of 2.91. His strikeout rate is up to 34.2 percent, and his walk rate has stayed stable at 5.7 percent.

If Nola’s value has dropped in the eyes of the person who rosters him in your dynasty league, it is a great buying opportunity. I also suspect his ADP will slip in redraft leagues next season, creating a chance at a solid return on investment. Nola could be one of the best values among starting pitchers in 2022 drafts.

It has been an interesting ride for Eduardo Rodriguez, who seemingly broke out in 2019. Unfortunately, Rodriguez missed the entire 2020 season after being diagnosed with COVID-19, which led to myocarditis. Once Rodriguez was healthy, he had a typical offseason and ramp up for the season. Expectations were all over the board. The last time Rodriguez pitched, he impressed. He posted a 3.81 ERA with 213 strikeouts in 203 innings in 2019. This season is one that Rodriguez would like to forget, despite the underlying metrics being very solid.

Rodriguez has a 5.00 ERA, and a 1.38 WHIP in 142.1 innings pitched. His 11 wins have been helpful for Fantasy purposes, but the ratios have not been great. Like Nola, Rodriguez has posted the highest strikeout rate of his career and lowest walk rate. It is interesting that a pitcher that makes improvements like that could have one of the worst seasons of his career.

Due to those factors and bad defensive luck, Rodriguez has a 3.46 FIP and a 3.49 xFIP. I would not be surprised to see a significant rebound from Rodriguez in 2022. The draft price should be affordable in redraft leagues, so I will be interested to see where he ends up.

One of the top pitching prospects in baseball made his much-anticipated debut in May. It has been an up and down season for the rookie, but Logan Gilbert has shown flashes of being the pitchers many thought he could be. It is not often you see rookie pitchers come up and dominate Major League hitters immediately, so overall, it has been a solid season for Gilbert.

If you look at September specifically, Gilbert has come into his own. In 22.1 innings pitched, Gilbert has a 2.01 ERA and a 0.94 WHIP. More impressively, three of his four starts were against the Astros (twice) and the Red Sox. Gilbert has always been a pitcher that we marveled at this command and control, and that has been on full showcase over the last month with just three walks. He has also struck out 23 batters and produced a 14.4 percent swinging-strike rate in September. Given the prospect pedigree and underlying numbers suggesting he underperformed most of the season, it should not come as a huge surprise to see Gilbert coming into his own.

At first glance, Gilbert’s 3.55 FIP and 3.72 SIERA stand out. The Mariners have a bottom-tier defense this season which hasn’t helped Gilbert’s case. One of the negatives in Gilbert’s profile is that he allows contact at an above league-average rate, which is often hard contact. Gilbert’s hard-hit rate allowed is worse than 88 percent of pitchers. Not an encouraging sign. But, the good news is, it could be an easy fix for Gilbert. 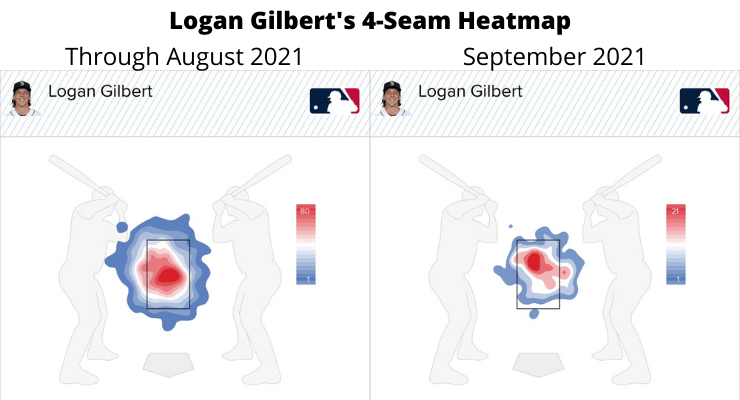 Check out the heatmap above. The first map is Gilbert’s fastball location for all starts through August 31. Considering Gilbert throws his fastball over 60 percent of the time, his location is essential. He was leaving it in the heart of the zone far too often earlier this season. Over the last four months, Gilbert has done a better job keeping the fastball up in the zone.

Gilbert should only improve as he continues to refine his arsenal and get more comfortable locating pitches against big league hitters. I believe Gilbert should continue to blossom as a starting pitcher, and he could have an affordable draft cost next season in redraft leagues.

Thanks for reading my article on underperforming starting pitchers. Be sure to head over to FantraxHQ to check out all our great baseball content as you l0ok to finish the season strong!