Two-Start Pitchers to Target for Week 12 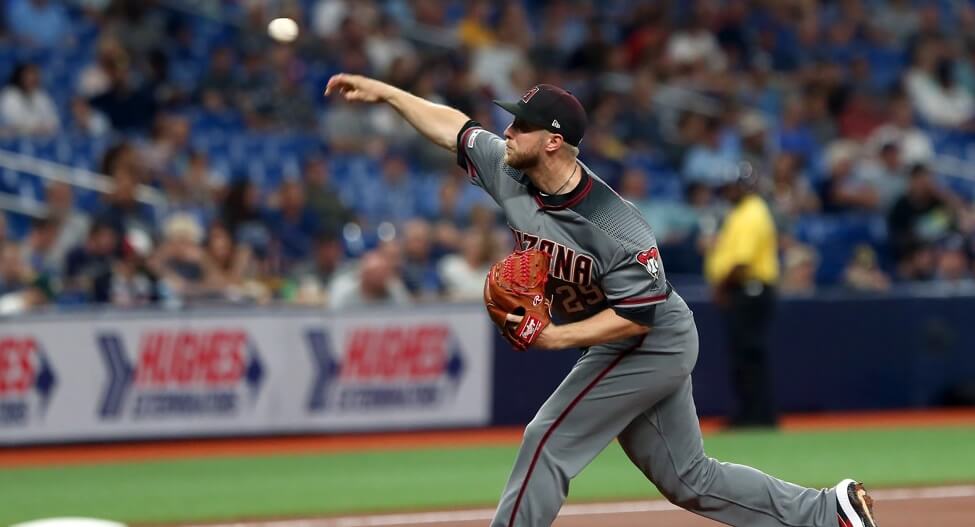 Welcome back to another helping of Two-Start Pitchers to Target. In this edition I’ll be suggesting starting pitchers, like the Arizona Diamondbacks’ Merrill Kelly, to add for Week 12 of the 2019 fantasy baseball season.

This strategy applies beautifully to weekly leagues and daily leagues with blind bidding waivers, but can be helpful in head-to-head formats as well.

All pitcher recommendations are under 60% owned in Fantrax leagues; stats are through Wednesday’s games.

Kelly, like the Cardinals’ Miles Mikolas, has found early success in the U.S. after a stint in the Far East. Kelly spent three seasons playing in South Korea tallying 48 wins and a 3.86 ERA, and that was good enough for the D-Backs to hand him a two-year, $5 million contract (with team options in ‘2020 and ’21).

Based on the early results, it’s been a wise investment. Through 14 starts, the 30-year-old has posted a 3.73 ERA with seven wins to show for his efforts, and he’s been even better in his last three outings, with an 0.81 ERA and 18/2 K/BB spanning 22.1 innings.

Kelly is scheduled to face off against the Colorado Rockies (not at Coors) and the San Francisco Giants in Week 12. Both games are in Phoenix.

Year after year, road games have proven to be the Rockies’ weakness, and 2019 is no exception, as their .283 wOBA and .384 SLG% rank 29th and 27th, respectively, among all MLB teams on the road. The Giants are in the same boat, ranking 29th on the season in wOBA (22nd on the road) and 28th in runs scored. Only the Marlins and Tigers have fewer runs scored on the year. This is as good as it gets for a two-start pitcher.

The Rangers starting rotation is just awful, and Sampson, almost by default, has been one of their best pitchers of late. The 27-year-old has compiled a 5-0 record with a 1.99 ERA over his last five starts, highlighted by an 11-strikeout performance vs. the Royals and complete-game, one-run effort against the A’s this past week.

I really don’t expect him to continue this success all season long, but fantasy baseball, like all fantasy sports, is about striking while the iron is hot, and Adrian Sampson’s iron is smoldering right now.

Other Two-Start Pitchers to Add for Week 12

Brett Anderson, Oakland Athletics – 42% owned: Anderson should be owned in way more leagues than this. He’s always had the injury-prone stigma, and rightfully so, but he’s been healthy this year and has exhibited remarkable consistency, pitching to a 3.03 in his last five starts and a 3.72 ERA in his last 23 starts dating back to August 3 of last year.

Anderson has thrown at least six innings in six of his last eight starts and gets to face a terrible Baltimore Orioles team he beat back in April, and a Tampa Bay Rays squad he just threw 6.1 innings of two-run ball against on Wednesday. Because of his injury history, Anderson is likely one of the more available two-start pitchers for the coming week.

Tommy Milone, Seattle Mariners – 15% owned: Milone is another guy who has seemingly been around forever and is quietly putting up really good numbers for the Mariners, his sixth team in nine years in the Major Leagues.

The 32-year-old lefty has a 3.42 ERA and 0.98 WHIP in fives games to date, but there’s a quirk to his success: he’s only “started” three of those games, while serving as the “bullpen” guy to an “opener” the other two. That’s not necessarily a bad thing, but it makes him nearly unstartable in leagues that count quality starts over wins. It also hurts his chances at a win if the M’s are trailing when the opener hands the ball over. Despite this very “2019 problem”, he’s a must-add two-start pitcher this week facing the Orioles and Royals, two of the worst offensive teams in baseball.

Want to be even more prepared for the coming weeks? Check out Eric Cross’ Fantasy Baseball Waiver Wire.