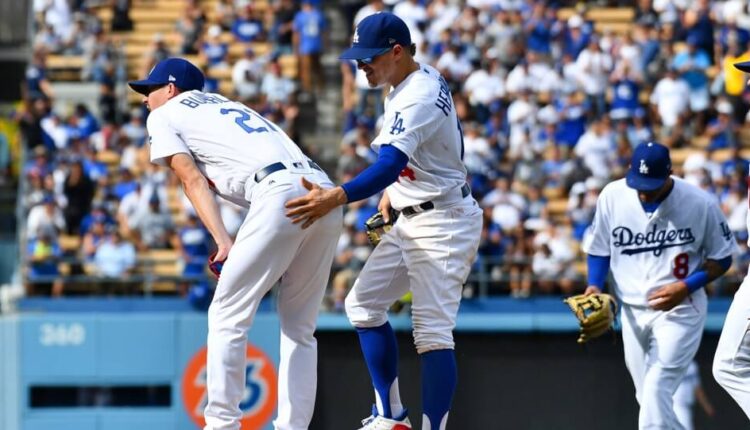 Every Friday for the remainder of the season I will be looking at Two-Start Pitchers for the week ahead and placing them into tiers. A couple of important notes regarding two-start pitchers. One, we will be looking at this on Fridays meaning that this is just a projection and all matchups and rotations are subject to change. Second, all of the rotation projections come from the Roster Resource SP Grid. This is a valuable resource and one I recommend you use if you do not already.

Jack Flaherty – @SEA, @SF: Flaherty has not lived up to his high draft cost but he is still a supremely talented pitcher with high K ability. The matchup against the Giants should be a smash and the Mariners offense while high risk is not good enough to avoid this double.

Walker Buehler – ARI, SD: Buehler has been incredible of late and has two mixed matchups this week. He is an absolute star in the making and should be in every lineup this week. Of all the two-start pitchers Buehler is probably the biggest no-brainer.

Patrick Corbin– MIA, KC: Carbin has not bee worth his massive contract so far but the lefty has two incredible matchups and should have an easy path at two wins. Do not even think twice about this one. Fire him up!

David Price – @TOR, @DET: Price has been excellent this seasons this far and gets two of the better matchups he could ask for. The Blue Jays have some right-handed pop but Price looks vintage, he should have a path to two wins.

Dallas Keuchel– PHI, MIA: Keuchel has struggled especially with the long ball in his first two starts. However, I still believe he is an above average starter and as a result, I will start him where I own him. The Phillies are a tough matchup with significant right-handed power but the Marlins matchup is worth the risk.

Clayton Richard– KC, BAL: Richard should be widely available in a lot of leagues and has two smash matchups. The left-hander has some serious issues with the long ball this year making this a high variance play but I believe in the lefty.

Adbert Azolay– @PIT, @CWS: Azolay has looked solid in his first eight big league innings but the issue has been his control. Fortunately, control was not an issue in the minors. He gets two plus offensive matchups and should have an easy path to at least one win.

Jeff Samardzjia – @SD, STL: Samardzjia has continued his frustrating ways pairing a decent K rate with low walks. However, he continues to allow a few too many homers. The Padres are top 10 in homers but the Cardinals are in the bottom 10. With two starts in parks that suppress homers, he should take advantage.

Matt Strahm – SF, @LAD: Strahm, like the rest of the league, has struggled mightily with the long ball this season. Like many of this week’s options, he pairs a fantastic matchup with a poor one. I am starting him to take advantage of the Giants matchup and hoping he can neutralize the Dodgers just enough to make it profitable.

Mike Minor – LAA, @MIN:  Minor has been one of the biggest surprises of 2019 and possibly one of the heroes of FAAB. He gets a low strikeout team in the Angels and a powerful offense in the Twins in his double week. Despite the relatively low-value matchups, he should be started.

Charlie Morton – BAL, NYY: Like most of this week’s two-start pitchers, Morton has one tough and one cake matchup. He is talented enough that the Yankee matchup does not scare me off. Fire up Morton wherever you own him.

Matthew Boyd – @CWS, BOS: Yet another pairing of high-end and low-end matchups, Boyd is too talented not to start this week. Boston does only have a 87 wRC+ against lefties making that matchup less concerning. Boyd is one of the top two-start options of the week.

Jake Odorizzi – @OAK, TEX: Another candidate for FAAB addition of the year, Odorizzi has been one of the most valuable starters in baseball. The right-hander gets two average offenses this week with neither offense being particularly concerning.  Odorizzi has been too good all year not to start him.

James Paxton – @NYM, @TB: Paxton has not looked like himself since returning from the IL. Many have speculated that he is pitching injured still. The Mets offense is above average against lefties but the parks combined with Paxton’s talent make him an easy start in my book. Don’t be scared off by his recent struggles start him where you own him.

Chase Anderson– @CIN, @PIT: Great American Ballpark can ruin any two-start week making this an extremely risky play. He then follows it up with a solid but unspectacular Pirates team. I am avoiding Anderson if possible.

Zac Gallen – @WSH, @ATL – Gallen has been every bit as good as advertised since his call-up, but this week I won’t be starting him. Both of these offenses are extremely talented and with the Miami offense supporting him I do not expect Gallen to get any wins. He is a supremely talented pitcher but this week is not one for him to be a part of your lineups.

Griffin Canning – @TEX, @HOU: Canning has been really good since getting the call with a high K rate and few walks. However, he has been victimized by the long ball. This week he gets two powerful offenses in power-friendly venues. I will be avoiding him this week.

Jaime Barria – @TEX, @HOU: Barria does not have the same talent as Canning but the same matchups. If I am not starting Canning there is no way I will be putting Barria in my lineups.

Adrian Houser – @CIN, @PIT: Houser has been solid in 2019 with a high K-rate and HR suppression despite a high walk rate. Great American Ballpark could boost those HR numbers making for a terrible day with his walk issues. While I like the Pirates matchup I think a blowup is coming for Houser.

Nick Pivetta – @ATL, @NYM: Pivetta continues to frustrate fantasy owners and continues to give up hard contact. He has not been much better since returning and faces two offenses with power. I need to see him string together good starts before using him in these kinds of matchups.

Ariel Jurado – LAA, @MIN: Jurado has shown solid results but is yet another low-K starter. The Angels make a ton of contact and in Texas, the juiced ball could lead to a ton of homers. The Twins matchup is also concerning and for that reason Jurado will be nowhere near my lineups this week.

Jalen Beeks – BAL, NYY: While I love that Beeks gets to face the Orioles in Tampa, I do not believe in his talent enough to start him against the Yankees as well. The lineup is far too potent especially against lefties to take that chance. [Editor’s Note: Though Beeks is not the official starting pitcher in most games, we’re treating him like a starter for fantasy purposes]

Tyler Mahle – MIL, CLE: Mahle’s two home starts are the main reason I’ll be avoiding him this week. The Brewers’ potent offense has the ability to ruin his week even before it gets going. There are plenty of better two-start pitchers on the slate.

Jake Junis – CLE, @WSH: Junis has not built on his success from 2018 and has actually regressed in 2019. He is walking more batters and allowing an elevated amount of homers. As a reuslt I do not want him facing either of these recently surging offenses.

Closers in Waiting and Relievers Worth Adding