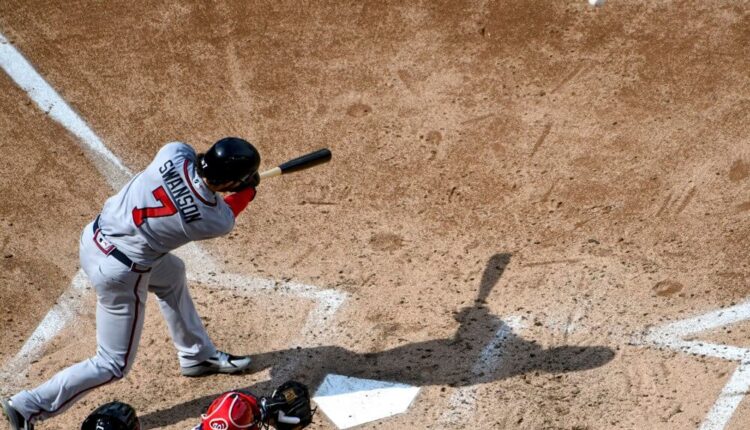 We’ve got a month of data to draw on now. Early-season performances are becoming more meaningful by the day. A player’s results may still be fluky, but owners can start to justifiably alter their opinions on some players based on their process and plate discipline numbers. This week, I touch on a couple young position players seemingly breaking through after down 2018 seasons.

Perhaps no metric is a better indicator of a hitter’s process change than swing rate. There’s nothing he can control more; whether he swings is entirely at his discretion. There is no such thing as an ideal swing rate; Javier Baez and Brandon Nimmo find their results in very different ways, but each is a quality hitter. Still, if we’re looking for players making a conscious effort to alter their profile, swing rate should be a good proxy.

From Fangraphs, the players with the largest year-to-year swing rate decreases between 2018 and 2019. 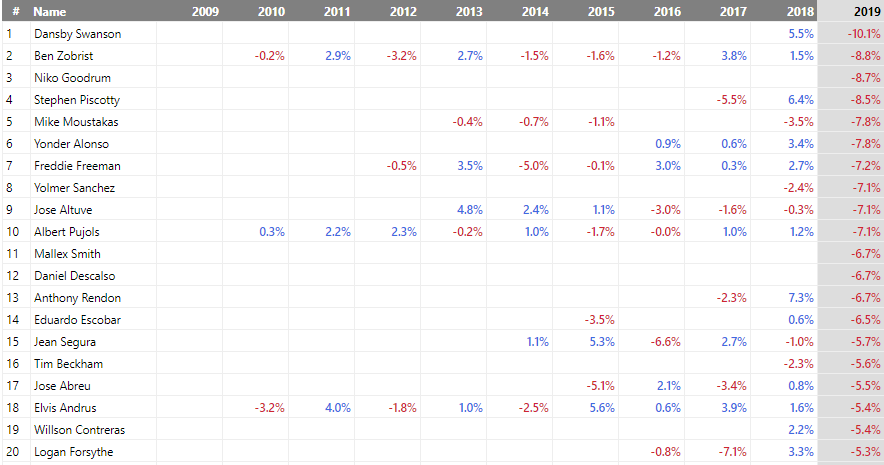 Dansby Swanson has a hefty lead. Maybe it’s a change he made on his own, maybe it’s an organizational mandate. Atlanta has cut its teamwide swing rate by four percentage points from last season, dropping from 2nd to 19th in baseball in aggressiveness. That patience is paying off for the entire lineup, which has been MLB’s seventh-best to this point. It’s been particularly promising for Swanson, who’s off to a career-best .263/.358/.550 start. His peripherals support the results.

Swanson’s seeing a career-high rate of pitches while ahead in the count, as one might expect given his patience. Unsurprisingly, those favorable counts have translated into better contact. Swanson’s average exit velocity is up nearly five miles per hour from his full-season mark in 2018, and he’s finding the barrel more consistently.

This isn’t a guarantee that Swanson has finally broken out, but it’s the best he’s looked as a big leaguer. True, we’ve seen Swanson put up results like this before. As recently as last year, Swanson had a month-long stretch in which he slashed .294/.358/.565. Part of that stretch came in September, though, where Swanson benefitted from facing expanded rosters, and even then, he wasn’t showing the plate discipline he’s showing now.

We’ve long known Swanson has immense talent. We’ve already seen him reinvent himself from a below-average defensive shortstop to a plus defender. Though the bat has taken longer than many expected, Swanson is starting to click at the plate. He’s an elite athlete with laudable makeup, which is why he’s long been viewed as a potential breakout player. That’s finally starting to manifest in stat lines.

Schoop is the antithesis of the new-and-improved Swanson. Long an aggressive hitter, Schoop is leaning into it even more this season, leading all qualifiers in swing rate. As I noted when discussing Swanson, though, there’s no such thing as an ideal swing rate. Some hitters can find their way despite below-average plate discipline through a combination of bat control and power. Schoop has proven to be one of those talents. During his All-Star years in Baltimore, he thrived despite miserable walk rates by bludgeoning opposing pitchers. That version of Schoop has returned in Minnesota.

Schoop has already tallied 11 extra-base hits and his average exit velocity is up over two miles per hour from last season. Encouragingly, that success has come despite opposing pitchers adjusting to his aggressive approach. Schoop is seeing boatloads of sliders this season, as pitchers have increasingly figured they can eschew the fastball and allow Schoop to get himself out by tossing up spin. Instead, Schoop’s mashing as well as he ever has.

The projections all buy Schoop as a plus power hitter, unanimously forecasting him to slug near .500 moving forward. With the position down from its heights of a few years ago, Schoop’s a top-five fantasy option at the keystone.

Moving forward in this space, I’ll highlight an under-the-radar pitcher likely to pick up two starts in next week’s play. I’ll start with the Braves’ 21-year-old pitching prodigy. Soroka’s dealt with some shoulder trouble the past few months, but he’s come off the IL throwing harder than he did before he went down last June. Soroka’s command is elite, he’s got above-average velocity and both his offspeed pitches have gotten plus results throughout his brief MLB career. Soroka’s already an above-average pitcher.

More to the point, though, the Braves’ upcoming schedule is juicy. First, they’ll host a San Diego club that, despite possessing some promising young hitters, has the highest strikeout rate in the NL. Then, Atlanta heads to Miami, where Soroka will face off against a Marlin lineup that ranks second in the NL in strikeout rate and has all of two above-average hitters, per Steamer projections. It’s not out of the question that Soroka wins both starts with upwards of 15 strikeouts and great ratios next week.

Two-Start Pitchers to Target for Week 5