I’ve been doing my weekly previews all year, and I’ll continue to modify on the fly. Last week, I kicked off a new format where I look at one player who’s been hot and looks poised to continue at something resembling their current pace, one player who’s scuffling but might break through and a two-start pitcher who could be a plausible streamer.

I had kind of given up hope for the Bell breakout. He clearly had plate discipline and bat-to-ball skills. But he was pushing 27, had almost two and a half years in the big leagues under his belt, and has never shown an ability to get the ball off the ground. “Some players just can’t pull off a swing change,” I reasoned. “Bell’s one of those guys.”

I was wrong. All of a sudden, Bell’s batted ball profile looks like that of a power hitter. Ground ball rate down? Check- by over ten points. Pull rate up? Check. Hard contact rate up? Check. The numbers all scream swing change.

You needn’t be a hitting guru to see Bell’s different mechanically than he was last season, at least from the left side. Here’s a pair of screenshots from Baseball Savant- the first from last September, the second from Bell’s home run off Shelby Miller on Wednesday. 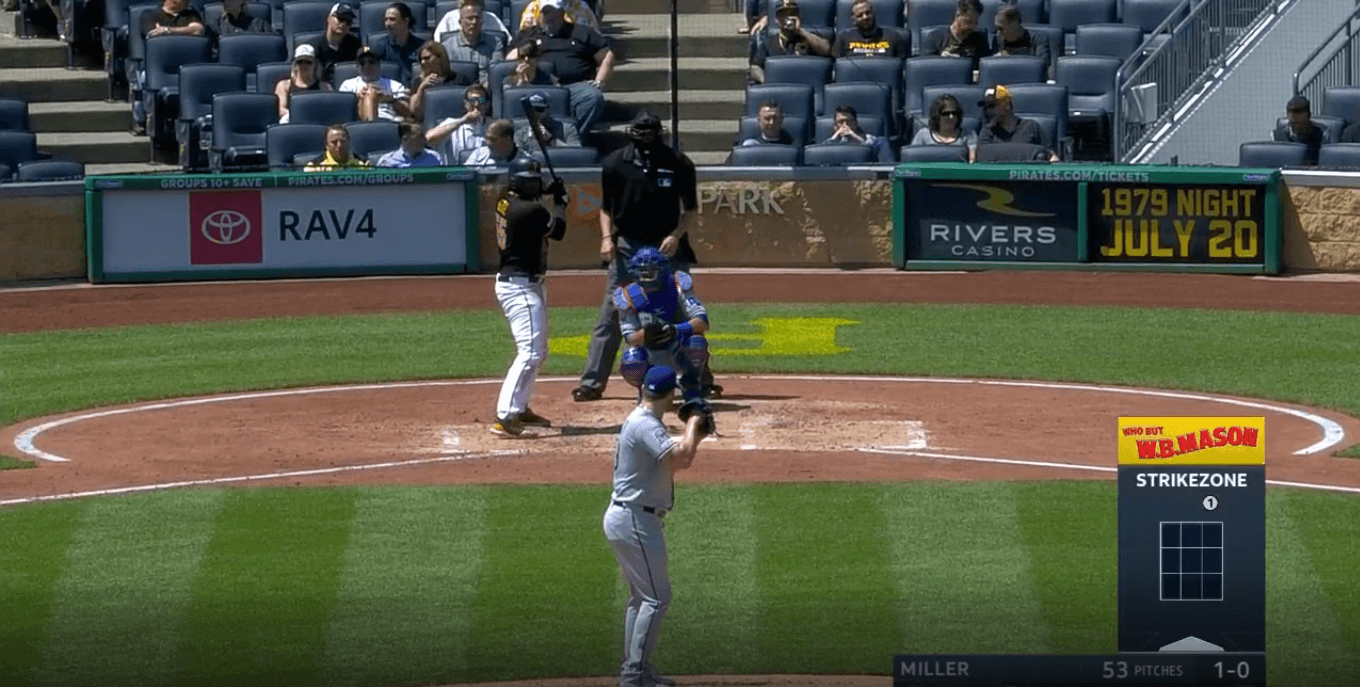 The changes to Bell’s pre-swing setup are stark. He’s more upright, closed off his front side significantly, and has his hands significantly closer to the hitting zone now. Maybe Bell did this on his own; maybe first-year hitting coach Rick Eckstein suggested the change. Whatever the impetus for the adjustment, it’s working. This seems more than a mere hot streak. 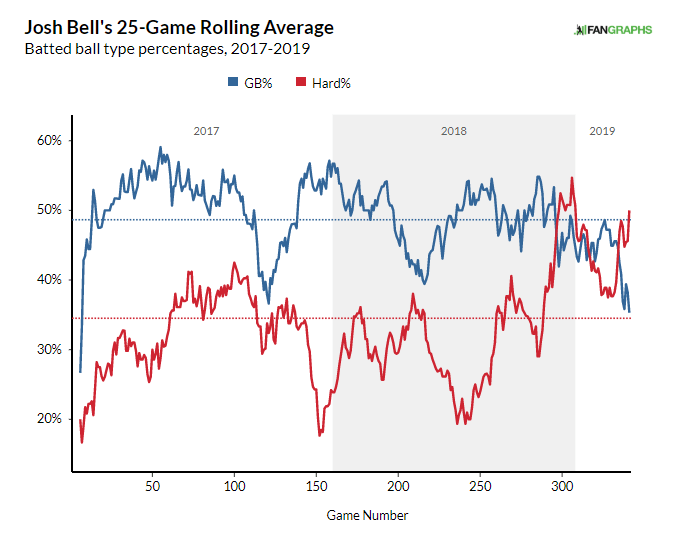 Maybe this is another instance where betting on an uber-talented hitter to eventually figure things out pays off. Bell was long a top prospect, and it certainly wasn’t for his defense. Scouts have long thought he’d be an impact, middle-of-the-order bat. Now, the results (and the projections, for that matter) have caught up. Mea culpa.

About to Break Out – Jack Flaherty

Jack Flaherty was supposed to be a budding ace. His 4.32 ERA through seven starts is much more indicative of a back-end starter. There’s no reason for Flaherty owners to panic, though.

Whenever a pitcher struggles, the first thing to look at is the quality of his stuff. Is the velocity down? Are his pitches moving differently? Has he lost any spin? In Flaherty’s case, the answer to all three questions is no. Other than dialing back his sinker for a few more four-seamers, Flaherty’s attacking hitters much the same way he did in 2018. He’s still bringing mid-90’s heat with a plus bat-missing slider and an average curveball. Nor is he having trouble throwing strikes; Flaherty’s command has always been key to his success, and he’s continuing to limit the walks.

So what can explain the jump of a run in ERA? Flaherty’s struggled with the long ball in the early going, especially against left-handed hitters, who are slugging .494 against him. For most pitchers, that’d be concerning, especially since Flaherty doesn’t have a changeup to fade away from opposite-handed barrels. Except it’s not like Flaherty had a changeup in 2018, either, yet he held lefties to a .194/.300/.310 line last year. He was better without the platoon advantage.

There was probably a bit of luck involved in his success against left-handers last year. A fastball-slider specialist, Flaherty’s not the type of guy we’d expect to run reverse platoon splits his whole career, and his strikeout and walk numbers were indeed much better against right-handers. At the same time, that Flaherty shut down lefties for an entire season indicates we shouldn’t expect him to continue to get obliterated by them moving forward.

I think the answer to Jack Flaherty’s early-season struggles is actually pretty simple. Consider the hitters who have taken Flaherty deep this season: Ryan Braun (twice), Joc Pederson, Lorenzo Cain, Yasmani Grandal (twice), Hernan Perez, Anthony Rizzo. Perez excepted, those are good hitters, underscoring the brutal schedule Flaherty’s had to weather so far. Five of his seven starts this season have come against Milwaukee, LA, and Chicago. The Dodgers and Cubs are off to stellar starts, and while Milwaukee’s lineup has come out a bit slower, they saw Flaherty three times over a three-week stretch. Flaherty can be forgiven if Brewers’ hitters just got comfortable having seen him so much in such a short time.

Fortunately, St. Louis’ schedule lightens up over the coming weeks, with Flaherty likely lined up to take on Atlanta (twice), Texas, Chicago, Cincinnati and Miami over the next five weeks. Since he still looks like himself, the results should follow.

The two-start options are limited next week thanks to an abnormally quiet Monday. Thornton’s lined up to toe the rubber for Toronto Tuesday and Sunday, with road starts against San Francisco and the White Sox. He’s had a rough go of things in his rookie season, winless in his first eight starts with an ERA over 5.00. Fangraphs’ Eric Longenhagen tabbed him three plus pitches this offseason, though, and his fastball and slider are at least getting whiffs.

Thornton’s a bit of a wild card whenever he takes the mound. His command is below-average, so he’s likely to run enough deep counts to prevent him from working deep into games. Additionally, his ground-ball rate so far has been atrocious (something that didn’t plague him so much in the minors, admittedly), so he runs the risk of giving up a few too many dingers. That shouldn’t be much of an issue against a Giant team allergic to slugging, while any power the White Sox have is offset by their exorbitant strikeout totals. It’s slim pickings this week, but Thornton should be in line for his best two starts as a big leaguer.