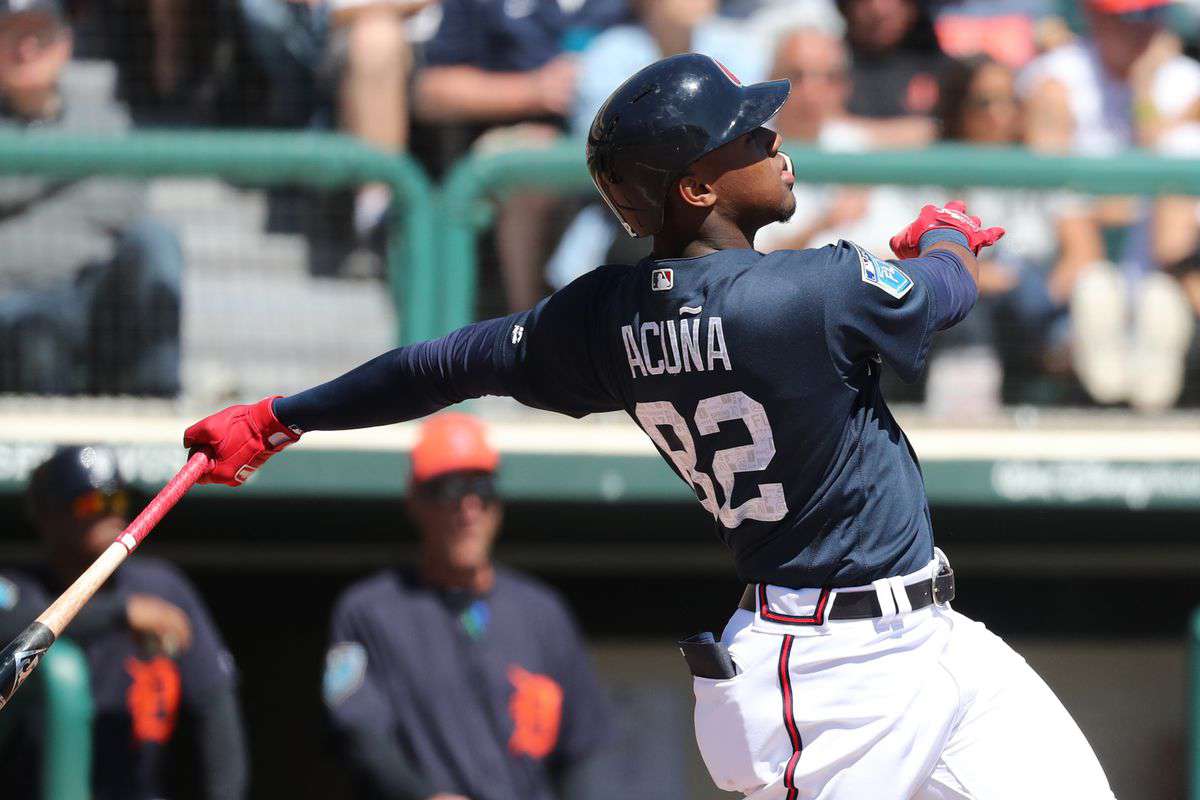 The draft is a fickle mistress, teasing us with values that skyrocket on draft day, leaving many a roster naked and afraid facing the long season ahead. BUT FEAR NOT! There is a better way! The Fantasy Black Book doesn’t believe that dollar amounts equate to an auction strategy. They’re merely a guideline from which you should glean general value for statistical returns. It’s those return on investments in roto auctions that mean everything, and the ‘Dummy Roster” is the best way to begin shaping your fantasy baseball auction draft strategy. You may not get every single player on your wish list, but it’s quite possible to get players with similar statistical profiles and price points to do the same job.

What I’ve done here is taken auction values for players and their projected stats, tallied up those projected stats season long roto style, and compared those totals to last year’s 15-team Tout Mixed Final Standings. That way we can see how we must maximize our budget to get the stats needed to win the overall championship. Please note, in a H2H points league, I would be MUCH more aggressive on the SP budget, because that’s how you create a weekly advantage.

So, without further ado, here’s the perfect auction for 2019 (theoretically): The outfield was about being well rounded and deep. I passed on the Mike Trout and Mookie Betts premium guys for the slightly less expensive, but statistically 85% version that is Ronald Acuna. Yasiel Puig brings a nice well-rounded statistical presence, while Michael Conforto delivers some pop. Victor Robles’ price could soar in March, but for now he’s a prime sleeper in roto formats. Ketel Marte will be a sneaky $1 guy, as will his teammate Jake Lamb. Lamb is here for his cheap power. I spoke with him. He’s fine with it. 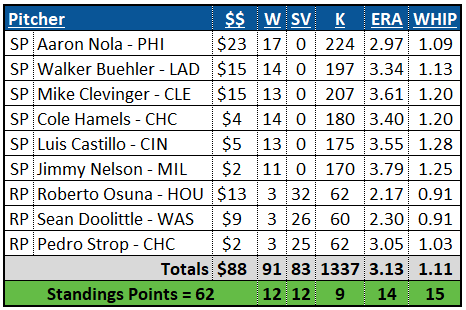 The pitching staff may not have a very top tiered ace, however, it’s built on proven assets, like Aaron Nola and Cole Hamels, along with the young upside of Walker Beuhler. Mike Clevinger is coming off a strong campaign in a weak division, and Luis Castillo’s second half bodes well. Jimmy Nelson is a risk, but when you consider his 2017 breakout, he’s worth it! All reports on his health have been encouraging. The bullpen has a top closer in Roberto Osuna, a mid tier guy in Sean Doolittle and a flier on Pedro Strop. I believe there’s a 75% chance Strop has a good April and never gives the job back to Brandon Morrow in Chicago. 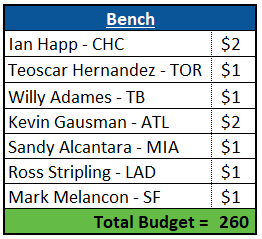 The bench is built on upside. Ian Happ and Teoscar Henrnandez have the talent to far exceed their cost. Willy Adames may not blow away his peers statistically, but he could be a quiet contributor. Sandy Alcantara showed glimpses last year of being special. Mark Melancon may indeed get one more closer run, and it costs nothing to find out. The Dodgers rotation is made of Swiss cheese and scotch tape, so expect 20-plus starts from Ross Stripling in 2019.

What’s important here is the statistical thresholds needed to win in this format. If you can’t acquire these exact players at these prices. Then, look for other players to pivot to during the draft and keep trying to hit those category benchmarks. Of course, the deeper the league, the more of a premium you’ll pay across the board, so be prepared for that eventuality.

This is a good place to start in most leagues. I encourage you to build your own “Dummy Auction Rosters”. It’s the smart thing to do.

The best advice is: take this concept and apply it to YOUR leagues as you prepare for auctions.

You buying in on Joe’s perfect fantasy baseball auction? For more great rankings, strategy, and analysis check out the 2019 FantraxHQ Fantasy Baseball Draft Kit. We’ll be adding more content from now right up until Opening Day!