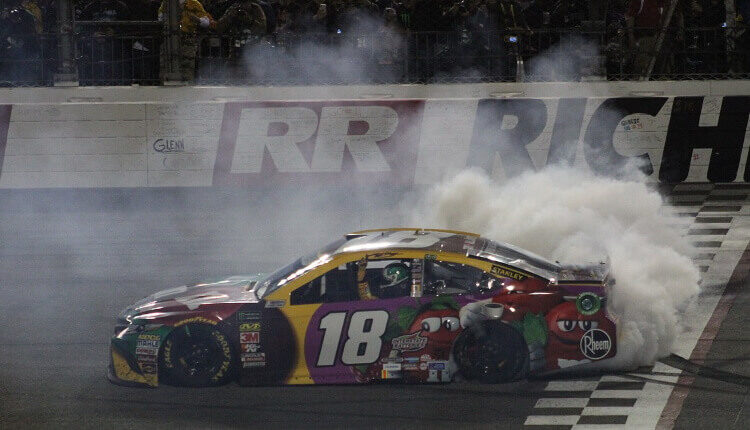 On Sunday, NASCAR heads to Virginia for the Toyota Owners 400. It will be quite the swing from the road course last weekend. The drivers will also have quite the task ahead of them if they want to top the excitement of last week’s final lap. There has been a lot of back and forth about the shoving involved, but I think we can all agree on one thing: Many DFS players lost a lot of money when A.J. Allmendinger fell from the top 3 to finishing 33rd.

Time to bounce back. Let’s take a look at Richmond Raceway.

Track Length: 0.75 miles – It is considered a short track that races like a superspeedway.

The Toyota Owners 400 is the seventh race of the season. Six races into the 2022 Cup, we continue to see new winners each week. Chase Elliott, Ryan Blaney, and Joey Logano sit atop the Cup Series Standings, but none have taken home a checkered flag. Alex Bowman is in fourth place with one win, yet he has only led 16 laps this season.

Then there is Ross Chastain in fifth. Last week’s win at the Circuit of the Americas was his first career Cup victory, and in the first six races, he has finished in the Top 5 four times. This year, only Blaney has led more total laps than Chastain (206 to 156). The single blemish on his season thus far was a DNF at Daytona, but otherwise, he has been a model of consistency, excitement, and affordability in DFS. Whether or not that will continue remains to be seen, but he is a must-have in season-long formats.

Here’s an overview of drivers I will be looking to roster in DFS and season-long formats this weekend at the Toyota Owners 400. I’ll be back Sunday morning looking at whose value increased following Saturday’s qualifying races. Thoughts? Wondering how you should play NASCAR fantasy? Hit me up on Twitter @thewonkypenguin.

A Word About Driver Ratings

While my recommendations are not based solely on driver rating, I find it a good metric for identifying who to hone in on and who to look away from. The rating is a formula that combines the following: Wins, Finishes, Top-15 Finishes, Average Running Position While on Lead Lap, Average Speed Under Green, Fastest Lap, Led Most Laps, and Lead-Lap Finish. A perfect driver rating is 150.

Truex currently sits in seventh place in the Cup Standings and holds the dubious honor of being the only Toyota in the Top 10. We have no reason to believe this will change for any reason this weekend. Truex and Richmond Raceway go together like chocolate and peanut butter… Like coffee and cinnamon rolls… Like Aaron Rodgers and drama.

The stats speak for themselves. Truex’s driver rating at Richmond is 128.3, which is as close to perfect as we will probably see this season. He’s won in three of the last five races and has an average start of 6.2 in those races. But get this: His lowest finish is fifth. I’m not sure what to tell you other than getting him in your lineups is the easiest decision you can make this weekend.

I am finding it very difficult to value Hamlin this season correctly. In six races, he has failed to finish three times. He’s led 35 laps on the year but slots in 22nd in the standings, one place behind Justin Haley. Whether the DNFs result from car issues or driver error, No. 11 hasn’t looked like the dominant driver we’ve become accustomed to.

So why is he a Contender? His driver rating in Richmond is 113.6, with an average start of 9.4 and the lowest finish of 12. In the last six races, he has led 449 laps, second only to his former teammate, Truex. He is a Contender because he is Denny Hamlin, and this should be a track where he shines. Roster him with caution, though, if his 2022 issues turn out to be pervasive versus temporary.

Logano is having a solid year, one of the select few who seems to have adjusted to the new cars well, given he’s had no DNFs. The No. 22 car has won here twice in 2014 and 2017, and he boasts a driver rating of 110.1. His average finish in Richmond is also a sparkling 4.8. I consider him a high-floor, average-ceiling driver on Sunday, but someone with his experience and history is capable of taking home the win.

Ever since I sang Kyle’s praises the week after Phoenix and declared that eventually, he would win this year, he has responded by finishing 33rd and 28th in the next two races. With that level of support from him for my predictions, I decided to put him in the Contenders again for no reason.

Well, no reason other than his driver rating of 108.3, six previous wins at this track, five Top 10 finishes in the last six races here, and an impressive 347 laps led in those six. His lowest finish since 2018 is ninth. Throw him in your lineups. He won’t let me down again.

Because of the chaos at the end of last week’s race, Harvick finished a respectable 11th and sits at 14th in the Cup standings. However, this weekend, I expect him to do quite well at the Toyota Owners 400. He has a driver rating of 105.2 and the highest average start among the field at 3.6. In a season filled with the young guys besting their elders, I think this one provides a chance for the seniors on the circuit to return with a vengeance.

Of course, I could be totally wrong.

Ross Chastain may own the world of Top 5 finishes, but when Alex Bowman crept into the trio at the end of the EchoPark Automotive Grand Prix, I wasn’t even remotely surprised. I feel like he’s been a lurker in every race, for lack of a better word. As I mentioned earlier, the No. 48 car has led 16 laps this year. They just happen to be crucial, end-of-race laps that have propelled him into fourth place in the standings. Some power rankings now have him listed first overall. His driver rating at this course is a pedestrian 84.4, but depending on his qualifying position, I won’t overlook him at the Toyota Owners 400.

A model of consistency, the No. 9 car sits atop the Cup standings because he always seems to be in a position to score points. Aside from one clunker in California, his lowest finish of the year is 11th. In Richmond, he has a driver rating of 92.8 and an average finish of 9.8. My only issue with Elliott is the amount of salary he eats for what will probably be a high-floor, low-ceiling run. But he rounds out a lineup nicely if you’re loading up in the median salaries.

Bell is another driver who falls into the “If he finishes the race, he’ll be a great asset” group. He has had two DNFs in 2022, but he also has two Top 10 finishes. Most importantly, his average finish at Richmond is 7.33, and he has a driver rating of 97. With an average start of 14.7, this sets up DFS players for some positional movement points worth grabbing. In addition, with Toyota’s dominance at this track and what should be an affordable salary, Bell will be in a couple of my lineups on Sunday.

Reddick holds onto the tenth place in the Cup standings and has quietly been improving as of late. He was a victim of tire issues early on, leading to two DNFs, but he also has three Top 10 finishes in the four races he did complete. While his driver rating in Richmond is only 75.5, he could provide a lot of value for what will most likely be a middle-of-the-road salary.

Before this year at Richmond Raceway, the No. 1 car had an average starting position of 23.8 and an average finish of 22 in only four races. Considering how he has run so far in 2022, I’m willing to look past his low 62.2 driver rating and give him the benefit of the doubt at the Toyota Owners 400.

If FanDuel continues to price Chastain anywhere in the $9,000 range like last week, he is a steal and should be stolen by DFS players everywhere.

And here, we’ve reached the problem with statistics versus real life. Keselowski has the fifth-highest rating at Richmond with a glowing 107.9. He has three Top 10s, two Top 5s, and one win in the last five races. He had one additional victory here in 2014. On paper, there is no reason to avoid rostering him.

The reality is that RFK Racing has been penalized heavily for a modified-part violation, incurring a 100-point deduction, a playoff-point deduction of ten, a $100,000 fine, and a four-race crew chief suspension. With the penalty, Keselowski dropped to 34th in the Cup standings, and there is no way this situation isn’t serving as a massive distraction, even if he is a veteran driver.

Unless he somehow comes with a massive discount or qualifies in the lower 20s/early 30s, I won’t put him in many lineups.

We’ll see how the qualifiers shake out and then be back on Sunday morning with some DFS picks so we can hopefully grab some cash at the Toyota Owners 400. See you then!